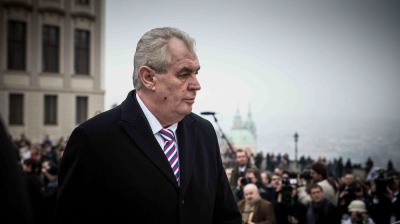 Zeman provoked protests on yet another national holiday on October 28.
By Tim Gosling in Prague November 1, 2016

An inter-governmental agreement is the preferable route to expanding the Czech Republic’s nuclear power fleet, a senior official at state-controlled energy group CEZ suggested on October 31.

The comments of Petr Zavodsky, head of CEZ's nuclear power construction division, come just days after it was reported that China is pushing Prague to hand it a contract to build one of two planned units without a competition, similar to Russia's deal in place in Hungary. The comments only highlight the opposing geopolitical forces at play in the Czech Republic and the wider region.

Zavodsky told CTK in an interview that an inter-governmental deal is more flexible than a tender. Such an agreement can cover financing and other areas rather than purely supply and construction of a new nuclear unit, the CEZ official said. A public tender can also not demand Czech suppliers are used during the project. "This is a major flaw," he insists.

However, the issue is anything but purely economic. Russian or Chinese involvement in EU nuclear plants is also a geopolitical question, offering leverage to suppliers of technology and fuel.

The geopolitics that come attached to such economic deals was illustrated last week by a scandal surrounding President Milos Zeman. Culture Minister Daniel Herman claimed the head of state withdrew an award to his uncle – a holocaust academic – because Herman had met with the Dalai Lama.

The imbalance of the relationship between Prague and Beijing was illustrated by a letter, signed by senior Czech officials, pledging that Prague respects the territorial integrity of China. Czech officials have apparently been told in no uncertain terms that the Tibetan spiritual leader is out of bounds.

However, on October 28 thousands protested Zeman’s apparent blackmail.  A survey also suggests the majority of Czechs consider the contents of the letter to be embarrassing toadying.

Yet Zeman is the main figurehead for a political force pushing for closer relations with Russia and China. The eastern-facing oligarchs behind the Czech president – including the country’s richest man Petr Kellner and the closely-held Slovak financial group J&T – will appreciate his pragmatism and populism.

Dr Rudolf Furst at the Institute of International Relations hints to bne IntelliNews that the fuss over a recent shopping spree by a mysterious Chinese company – CEFC, reported to be connected to the Chinese army – has its roots in racism. However, there are also clear transparency issues.

CEFC has little to say to the local press, despite buying into high profile businesses such as football teams and airlines. Meanwhile, Jaroslav Tvrdik, Zeman’s point man on relations with China, has quietly built himself up to the point that it's claimed he outguns the Czech embassy in Beijing.

Meanwhile, political opposition to the push eastwards is fractured by the lack of leadership, provincialism and low-level opportunism that is so typical of Czech politics.

Trade and Industry Minister Jan Mladek was quick to insist the reports of a potential inter-governmental deal with China were wide of the mark. Yet he is seen as pro-Russian in the wider scheme of things, and might look more favourably on a deal with Moscow, even despite the current EU sanctions.

Prime Minister Bohuslav Sobotka is a major target for the wily Zeman, and chooses his battles with the president carefully. That was shown as the PM signed off on the contentious letter to Beijing despite his clear strategy to try to build himself a reputation in Washington and Brussels as the responsible and reasonable leader in a Central European region dominated by populism.

The tone of the missive sent to Beijing suggests the Czechs could indeed be tempted to hand China an easy deal to build new nuclear capacity.

The Czech Republic cancelled an international tender to add two blocs at the Temelin nuclear plant in 2014, after the government stressed it would not offer guarantees to buy the power. The competition had pitched Russian state agency Rosatom against US-Japanese Westinghouse.

Earlier this year Prague approved a new strategy that calls for one new unit at each of the country’s two existing plants: Dukovany and Temelin. The Chinese were quick to express their interest, while Prague has said it wants CEZ to find partners that are willing to join it in funding the projects, to save taxpayers footing the bill.

Czech media carried unsubstantiated reports last week that China has demanded that if Prague wants to take advantage of its cheap nuclear technology, it must hand out an uncontested contract. While Mladek insisted tenders will be held, Zavodsky’s words show there are other approaches, at least at CEZ, which is 70% owned by the state.

Advocates of the short cut will be watching Hungary closely. Budapest dropped an international tender to sign an inter-governmental agreement with Russia on the expansion of the Paks nuclear plant – which includes a €10bn loan - in early 2014. The EU is said set to finally be ready to drop a series of probes into the deal – including one that looked at public procurement - in the coming weeks.

Russia is, of course, also keen on taking part in any Czech nuclear projects, and officials in Moscow have dismissed the reports of a possible deal with China as bargaining by Prague.

Attila Aszod, who heads the Paks project for the Hungarian state, appeared at a press panel at a nuclear conference this week in Prague alongside Zavodsky and Rosatom officials. Budapest’s agreement with Moscow states that at least 40% of suppliers must be local, he stressed in support of Zavodsky’s enthusiasm for an inter-governmental route.

However, Prague would risk the good reputation it has built with the US and EU should it take a short cut. At the same time, the Czech Republic’s safe haven status means that despite the fact that Prague does not want to foot the bill, a foreign state may well struggle to significantly beat the rates at which a quasi sovereign such as CEZ is able to borrow on the open market.

A Czech industry ministry spokesman said last week that six potential suppliers were expected to respond to recent Czech invitations to discuss the nuclear expansion. Companies from China, France, Japan, Russia, South Korea and the US are understood to have discussed the issue.

The next government – to be elected in October 2017 - will decide on the investment model for the new nuclear blocks. Powerful Finance Minister Andrej Babis – who has recently been seen in cahoots with Zeman in a bid to scupper coalition partner Sobotka and has taken a firm grip of CEZ – is seen as the most likely to lead the next government. Alongside Zeman, Babis was the first to call for a rapid solution after the 2014 tender was scrapped.