Czech retail trade growth accelerated by 6.4% in October, due to Christmas shopping 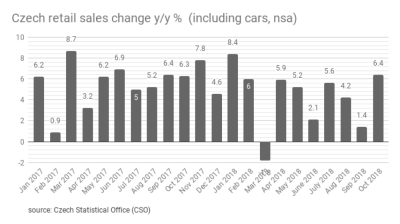 Czech non-adjusted retail trade increased by 6.4% in October year-on-year, up from 1.4% in September, driven mainly by sales via mail and online Christmas orders, according to the Czech Statistics Office data released on December 7. Sales adjusted for calendar effects increased at constant prices by 5.2%.

“Retail sales surpassed analysts' expectations in October. Households are not afraid to spend their increasing revenues and are interested particularly in goods and services,” UniCredit Bank analyst Jiri Pour said for the Czech News Agency.

“Everything suggests that households are slowly starting to get ready for Christmas this year, which is to be even richer than last year. Households are not afraid to enjoy their income from stable wage growth,” said Komercni banka's economist Monika Junicke.

The price deflator related to the corresponding period of the previous year, excluding VAT, reached 101.3%. It was influenced mostly by higher prices of automotive fuel, dispensing chemist, medical and orthopaedic goods, cosmetic and toilet articles, food, and other household equipment. On the other hand, prices decreased in retail sale of information and communication equipment in specialised stores and in retail sale of clothing and footwear, the statistics data shows.

The Czech Fund analyst Lukas Kovanda expects the growth of retail sales to slow down slightly next year and significantly in 2020. Growth dynamics will reach its limits. This, for example, was demonstrated by a significant fall in consumer confidence between October and November this year, which has been the most significant since 2011. “Czechs are increasingly afraid of a deterioration of their economic conditions, and if this fear persists, it is only a matter of time when it shows a noticeable deterioration in numbers for retail,” he concluded.