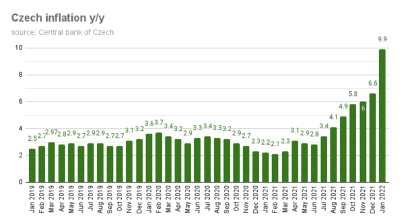 Czech inflation accelerated to 9.9% year-on-year in January, its highest level since July 1998, according to the monthly report by the Czech Statistics Office (CSO) from February 14. Inflation thus exceeded the upper boundary of the tolerance band around the Czech National Bank´s (CNB) target.

In month-on-month terms, the growth in consumer prices increased by 4.4%, the most since January 1993.

“Consumer prices increased by almost 10% in comparison with January [2021]. It is the highest value since July 1998, when the y/y price growth reached 10.4%. Housing, fuels and food had the biggest impact on the annual index in January,” noted Pavla Sediva, head of the Consumer Price Statistics Unit of CSO.

"The rise in inflation in Europe is mainly driven by energy prices. At the beginning of 2021, it was fuel prices, then electricity prices and, from the second half of 2021, mainly gas prices. However, these price increases are very uneven in terms of intensity and timing when comparing individual countries," said Jiri Mrazek, Director of the Statistics Department.

The main drivers of high inflation rate were prices of housing and prices of actual rentals, prices of fuels and food. Next in order of influence were prices in transport, where prices of motor cars were higher by 11.1% y/y in January.

According to the CNB´s statement, inflation can reach double-digit levels for a few months at the start of this year. “The increase in inflation will be driven mainly by the fact that administered prices will start rising strongly year on year from January onwards,” said Petr Kral, Executive Director, Monetary Department.

“This will be due to a rise in housing-related energy prices after the expiration in January of the temporary waiver of VAT on electricity and gas, which has reduced headline inflation by about one percentage point so far,” Kral added.

According to Radomir Jac, chief economist at Generali Investments CEE, headline annual inflation will continue to rise in the next two months and will most likely surpass 10%. "However, [its increase] should calm down in the spring months and annual inflation will start to decline more visibly from the third quarter at the latest," he said for the Czech News Agency.

"Given that inflation was again above the forecast in January, it cannot be ruled out that the CNB will proceed to a cosmetic 25 basis point interest rate hike in March," Miroslav Novak, an analyst at Akcenta, was quoted by the news agency as saying.