COMMENT: Russian Railways – the good, the bad and the ugly

For a man who didn’t speak a word of Russian, Winston Churchill seems like an odd choice as a font of wisdom about the place. But while his “mystery inside a riddle inside an enigma” quote is the worst kind of pop sociology, another one of his Russia-related quips, that political squabbling within the Kremlin was akin to “bulldogs fighting under a carpet”, has the ring of truth to it.

In comparison to most other countries, the Russian elite is and has long been quite insular. It is genuinely quite difficult (and many times even impossible) for outsiders to figure out who is “in” or “out” within the power elite. Thus, the genuine opacity of the Russian elite and the difficulty of obtaining reliable information about it has tended to lead to the proliferation of conspiracy theories, many of which are of remarkable complexity. Put simply, many Western experts feel the need to come up with elaborate explanations for what are in reality straightforward decisions.

The sacking of Russian Railways’ longtime CEO Vladimir Yakunin, for example, was portrayed in the media variously as part of a general environment of “economic turmoil and faltering government credibility”, as further evidence about the growing decadence of the governing class, or even as a sign of opposition leader Alexei Navalny’s growing influence. Some of the more excitable Western experts went so far as to interpret Yakunin’s dismissal as evidence that Vladimir Putin’s hold on power was starting to slip away. Yakunin, after all, was one of the original members of the famed “Ozera” cooperative. If Putin could no longer count on him, who could he count on?

With the benefit of some additional hindsight and a close look at Russian Railways’ IFRS financial statements, an alternate (if rather less exciting) explanation appears more likely: that Yakunin’s sacking was not the result of an inscrutable struggle within the Russian elite, but due to the simple fact that he violated the “rules of the game”. The “rule” in this case was not petty corruption or incipient disloyalty to Putin. Rather, Yakunin mismanaged his enterprise on a scale that, if replicated by the other state oligarchs (or “stoligarchs”, Putin’s friends who control large state-owned structures) would put the survival of the system itself in question. Yakunin’s mismanagement, in other words, had become too large (and too costly to the state) to ignore, and so he had to go.

As always, it helps to look at some charts to help put the scale of Yakunin’s mismanagement into perspective.

Consider the following chart that shows a decade’s worth of Russian Railways’ financial performance. Although (as you would expect to be the case) there are some substantial year-to-year fluctuations, two general trends are plainly visible. First, that Russian Railways is nowhere near as profitable as it was when Yakunin first took over. Back in 2006 and 2007, as the Russian economy was riding the tail end of an almost decade-long boom, the company posted a roughly 10% return on equity. For a state-owned company with objectives other than simple profit maximization, that is more than respectable. (In today’s environment, even an uber-capitalist firm like Goldman Sachs would be happy to get an ROE of that magnitude.)

Fast forward to the 2013-15 period and a starkly different picture emerges. Russian Railways is now losing money for its equity holders, primarily the Russian state. And this isn’t just a one-off blip caused by a swing in the ruble exchange rate or a fluctuation in the price of oil: the dramatic decline in profitability has been sustained over a period of several years. 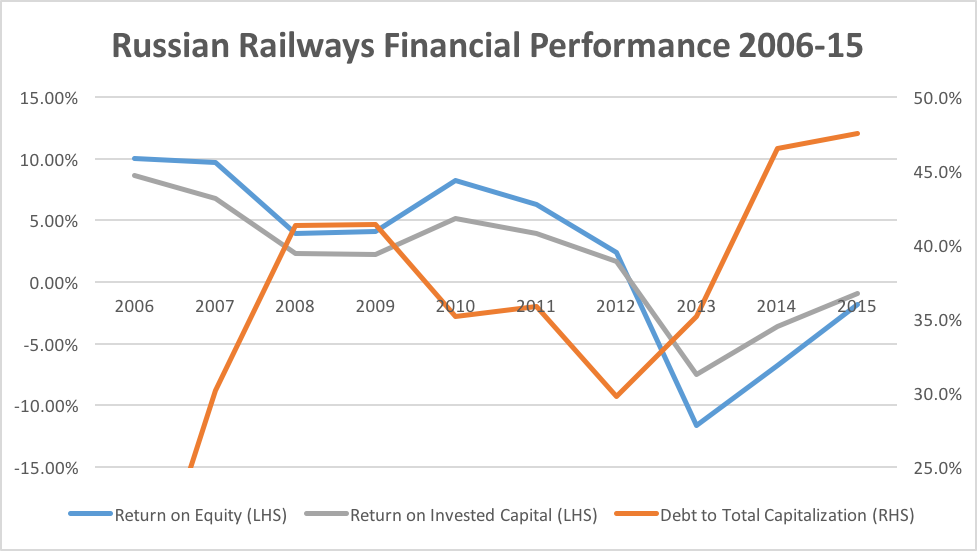 The second trend concerns the matter of the company’s steadily growing debt load. Back in 2006 Russian Railways’ capital structure was less than 25% debt. That might have been a little on the low side for what is, in essence, a public utility, but by the end of 2015 the company’s debt load was approaching 50% of its total capital structure. The long-term trend towards greater leverage was just as apparent as the long-term decline in profitability. Needless to say, leveraging a company up to decrease its profitability is not a sustainable long-term strategy.

Even more stark is the rapid increase in the subsidies required to keep Russian Railways afloat. When I first started collecting the data for this article, I assumed that, as a large, politically significant and rather unwieldy state company, Russian Railways had essentially always demanded a lot of money from the government. This, however, is not the case: these subsidies have grown dramatically since Yakunin first took over. 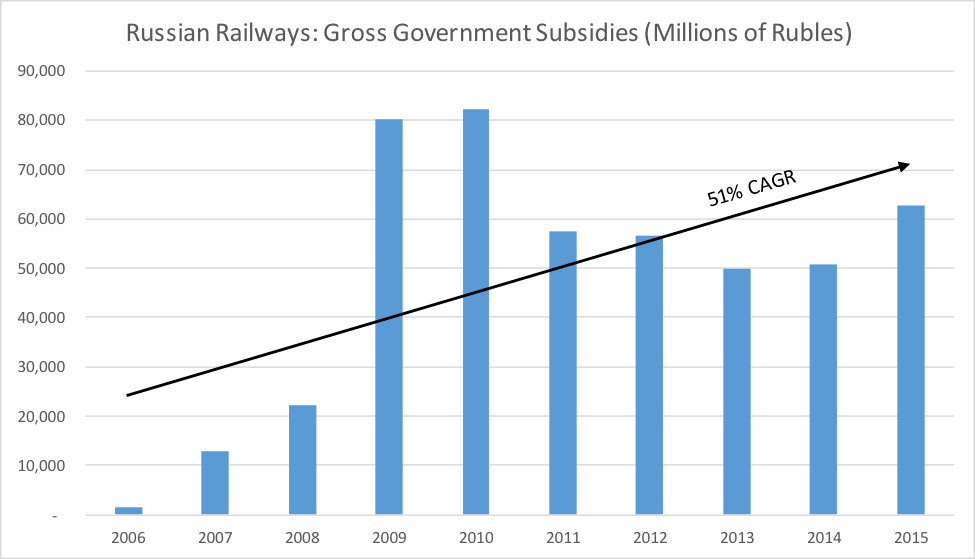 Danger to the system

If there is a lesson, it would seem to be the following: simple loyalty to the regime (and to Putin personally) is insufficient for keeping your job at the top of an economically significant state-owned corporation. Yakunin at times went to almost cartoonish lengths to demonstrate his loyalty to the government, and there were never any credible allegations that he remained anything other than a reliable foot soldier for the regime.

Putin values loyalty, but not apparently to the extent that he is willing to undermine the financial security of the state itself. If applied to the state-owned sector as a whole, Yakunin-style mismanagement would present a mortal peril to the regime’s survival: there’s simply no way for every state owned company to see its subsidies grow by an average of 50% a year in the way that Russian Railways did. A little bit of skimming off of the side is okay; running your company so that it requires ever-larger infusions of state-aid is not.

Yakunin’s sacking, in that sense, could be seen as a way of demonstrating to the other stoligarchs that that there are limits beyond which one dare not tread. The system, in that sense, is smart enough to ensure its own survival.

Mark Adomanis is a Wharton MBA student by day, Russian analyst by night. Follow him on @MarkAdomanis

ASH: The West is short-changing Ukraine
59 minutes ago
RIDDLE: If they fear us they respect us
1 hour ago
COMMENT: Can Russia pivot its European gas sales to Asia?
3 days ago
Perspectives | Beijing and Moscow clash over Kazakhstan’s oil
3 days ago
COMMENT: Emerging European tightening cycle coming to an end
6 days ago