CEE recovery better than expected but soaring inflation could peg it back, says Capital Economics 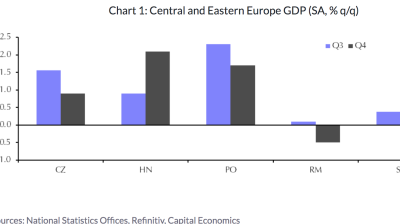 Recent GDP figures in Central and Eastern Europe were generally better than expected as the dropping of COVID-19 restrictions and easing supply shortages boosted the economic recovery in the region, noted Capital Economics on February 15.

According to the British economic research consultancy, Hungary recorded the strongest expansion, with growth picking up to 2.1% q/q (from 0.9% q/q in Q3), while growth slowed by less than the consensus expected in Poland and Czechia (to 1.7% q/q and 0.9% q/q, respectively). Romania showed a 0.5% q/q contraction and Slovakia recorded a disappointing 0.3% q/q expansion.

“Industrial production registered quarter-on-quarter growth across all economies in Q4; in particular, data show that the auto sector has begun to recover strongly over recent months, albeit from low levels,” Capital Economics noted.

However, Capital Economics pointed out that high inflation rates – and consequently rising interest rates – could peg back growth by hurting real incomes and consumption. “Aggressive interest rate hikes from central banks – which has further to run – will filter through later this year and take some steam out of domestic demand,” it said.

At the end of last month, the Vienna Institute for International Economic Studies raised its average growth forecasts in 2022 for the V4 states of Central Europe to 4.4%, followed by 4.4% in 2023, but warned about inflationary expectations becoming entrenched.