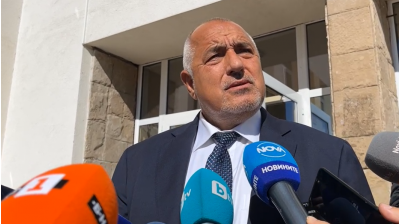 Bulgaria’s former ruling Gerb party is heading towards victory in the October 2 snap general election with between 23% and 25% of the vote, well ahead of reformist Change Continues that got around 19% on a record-low turnout of below 40%, exit polls showed.

Polls indicate Bulgaria will get its most fragmented parliament ever and comments from the key parties in the run-up to the vote offer little hope of a stable majority being formed in parliament.

Given the urgent need to tackle rising prices and secure energy for the winter ahead, the most likely outcome is a technocratic government.

According to Gallup International, seven parties will pass the 4% threshold with Gerb getting 23.5%, followed by Change Continues with 19.5% and the ethnic-Turk Movement for Rights and Freedoms (DPS) with 15.2%.

Fourth would be the far-right Vazrazhdane with 10%, followed by the Bulgarian Socialist Party (BSP) with 8.9%, reformist Democratic Bulgaria (7%) and nationalist pro-Russian Bulgarian Ascend with 4.7%. There Are Such People (ITN) has a slim chance of passing the 4% threshold with Gallup’s data putting it on 3.8%.

The votes from abroad are yet to be counted and might give some advantage to Change Continues, the DPS and Democratic Bulgaria, but even that would not bring more clarity.

The fragmented parliament will require tough compromises in the negotiations set to follow the election, or Bulgaria will face yet another snap vote. However, people are already tired of early elections and more than 60% would rather have any regular government than go to vote again.

According to Teneo, the fourth general election since April 2021 could lead to a government centred around either Gerb or Change Continues.

Both parties are broadly pro-Western — the new division that has emerged in Bulgarian politics pits Western-oriented against pro-Russian politicians.

However, neither of the two leading parties could form a stable coalition without the risk of losing their supporters by making concessions to potential partners.

Change Continues spent much of its brief time in power trying to root out corruption dating back to previous Gerb governments, and has already ruled out a coalition with Gerb.

Prominent political analyst Daniel Smilov commented during live broadcast by Dnevnik news outlet that the results from the election can change significantly during the vote count. He added that Gerb and the DPS seem isolated despite their better performance as none of the other pro-Western parties would agree to unite with them.

If Gerb decides to form a government, it could be backed by the DPS – the party has unofficially supported Gerb through three previous governments. However, Gerb’s leader Boyko Borissov seems reluctant to formalise this union and, even if he agrees to do that, more MPs will be needed.

“The world is at war. We have clearly stated that in this aggression, a war with clear aggressor which is [Russian President Vladimir] Putin – nothing against the Russian people – Bulgaria must be clear, categorical and precise for the place it belongs to – the EU and Nato,” Borissov said after voting.

His statement was seen as an indirect invitation to Democratic Bulgaria to set aside its red lines and agree to form a coalition. However, neither Democratic Bulgaria, nor Change Continues have ever said they could rule with Gerb if Borissov remains the party’s leader.

Gerb’s deputy leader Tomislav Donchev said the party does not exclude any party from possible coalition talks. He added the party will make a formal statement on the following day.

Despite the party’s condemnation of the invasion of Ukraine, there has been a suggestion that Gerb can theoretically form a coalition with the DPS and BSP with unofficial support from Vazrazhdane and/or Bulgarian Ascend.

Rifts in the pro-Western camp

Change Continues, along with its former two coalition partners – the BSP and Democratic Bulgaria – could not get 121 MPs as their number would only be around 100-105. This means that, unless that coalition gets informal support from Gerb or the DPS, the reformist coalition has no chance of forming a government either.

“We have serious differences [with Democratic Bulgaria], especially in the economic area,” Vassilev commented.

Petkov thanked everyone who voted and said that many people have shown that they want Bulgaria to be different, free of corruption.

“We want to respect the people’s choice and Gerb, being the first political force, carries enormous responsibility,” Petkov said.

He reiterated that Change Continues will not unite with Gerb or the DPS.

“We promised that before the election and we shall fulfil our promise,” Petkov said.

Vassilev added that Gerb and the DPS have got a clear mandate to form a coalition and rule the country, but that Change Continues will keep fighting for a European Bulgaria with a social budget that would not allow people to live below the poverty line.

According to Teneo, the most likely scenario would be a technocratic government or another snap vote in the winter, with the former seeming more likely as almost all political parties have said that a stable government is necessary at the moment so that it can tackle the tough challenges of the winter months.

“An expert cabinet with a pre-set agenda and limited timeframe in office could receive support from a wide range of parties. In fact, a technocratic cabinet might be better positioned to advance reforms or tackle the energy crisis than a weak political government,” Teneo noted.

However, a technocratic government would give more power to Bulgaria’s openly pro-Russian President Rumen Radev, who will be able to pick a prime minister-designate if the two largest political parties fail to form a government.

“More generally, a protracted period of political instability in the past 18 months hinders the advancement of deep structural reforms needed to boost the country’s economic competitiveness, strengthen democratic institutions, and improve the effectiveness of the public administration apparatus. The growing public disillusionment with the political system will continue to drive emigration and could lead to the emergence/strengthening of populist movements,” Teneo noted.

The leaders of Gerb, DPS and Democratic Bulgaria have said they would not comment before the first vote counts are announced.