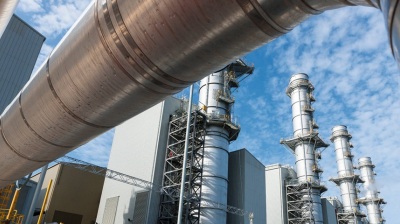 Pembroke B gas power plant in the UK. / RWE
By Richard Lockhart in Edinburgh August 18, 2022

Research from Carbon Brief showed that there had been an 11-fold increase in wholesale gas prices in the UK since 2019, which was responsible for 96% of the increase in household energy bills.

Carbon Brief warned that energy bills are set to nearly triple by early 2023, reaching well over GBP5,000 ($6,000) per year for the average household gas and electricity bill, which in the UK covers heating and hot water as well for most consumers. This compared with the current average of GBP1,971 per year.

The increase, which will raise total household energy bills to GBP193bn per year, or 8.1% of GDP, for the country as a whole, is being fuelled by a reliance on both domestic and imported gas.

Prices were mirrored in Europe, as the continent’s natural gas prices soared to a new height of above $2,700 per 1,000 cubic metres on August 16, as a number of factors coincided to drive up demand and constrain supply, ratcheting up pressure on Europe’s leaders in their standoff with Moscow.

Gas prices are also the result of the scorching summer weather across the continent, which has led to soaring energy demand for cooling systems, and has caused water levels to drop rapidly, hampering the transport of energy goods such as coal and triggering a slump in demand at hydroelectric plants (HPPs).

Carbon Brief said that the government’s efforts so far to mitigate the rising costs had been ineffective. Government support for households to date amounts to just GBP17.5bn, and plans to cut VAT or remove levies would only save around GBP4bn each. The government plans to reduce green levies from 5% of bills to less than 3% of the total in October.

Indeed, the proposed amounts of extra support currently being proposed by Conservative prime ministerial candidates Liz Truss (GBP11bn) and Rishi Sunak (GBP10bn), as well as from the Liberal Democrats (GBP36bn), are still a drop in the ocean compared to the GBP129bn increase in bills that is in the offing.

The research claimed that more pro-Green policies from the government could have lessened the impact of the increases, but admitted it was not much.

Bills would have been some GBP13bn lower if governments had not “cut the green crap” by rolling back climate policies over the last decade, equivalent to GBP220 per household.

Households could cut their bills by more than GBP300 by making simple changes to their boiler settings, with larger savings available from insulation, solar panels or electric vehicles (EVs).

However, compared to the GBP129bn increase, and the forecast January price cap of GBP4,467 and April cap of GBP5,038, according to Auxilione, such figures are insignificant.

In total, green levies and social policy costs comprise 8% of bills today, a total of GBP153. This amount is expected to remain unchanged for the next few price cap periods but will make up a declining share of bills – less than 5% from October – as wholesale prices dominate the total.

Even the government’s pricing regime for renewable projects such as offshore wind, called contracts for difference (CfDs), is fairly toothless.

Auxilione said that the CfDs that give guaranteed prices to new renewable energy schemes are currently costing the average household just 28p per year.

They will turn negative and start reducing consumer energy costs from October. The design of the contracts means projects pay money back to consumers when electricity prices are very high.

The current portfolio of roughly 18 GW of CfD projects – mainly offshore wind – will be cutting average bills by around GBP11 per year under the October cap.

As wholesale gas prices are rising and the portfolio is expanding, this saving will increase to around GBP18 in January, according to Auxilione’s detailed forecasts shared with Carbon Brief.

Carbon Brief pointed out that the UK is particularly exposed to high gas prices compared to other European countries. Up to 85% of households use gas boilers to heat their homes and around 40% of electricity is generated in gas-fired power stations. In France and Germany, fewer than 50% of homes are heated with gas boilers.

Moreover, the electricity market operates in a way that means the price of power is almost always set by the price of gas.

Yet in the long run, these CfD projects are four times cheaper than current gas prices, Carbon Brief said, meaning that expanding renewable energy capacity is also a way to cut bills in the medium term.

Similarly, solar panels, EVs and even heat pumps can cut bills, albeit they come with high upfront costs.

bneGREEN: Most growth in power generation by 2050 will be solar and wind – BP
5 days ago
bneGREEN: Renewable energy was a hot topic in Davos but for Europe, much work remains
11 days ago
bneGREEN: Floods turn Drina river in Bosnia into floating landfill
14 days ago
Central Asia’s shorter winters are whittling away glaciers
19 days ago
bneGREEN: River of waste clogs Serbia’s Lake Potpec after heavy rains
20 days ago