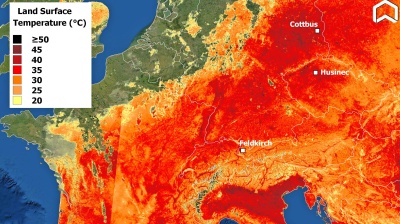 Temperatures in Europe broke through the 40°C mark in mid-June, stoking fears of record-breaking summer heatwaves that could endanger lives and threaten food supplies while providing further proof of the devastating effects of man-made global warming.

In the French resort town of Biarritz, temperatures reached 42.9°C on 18 June, the hottest ever June day in the town since records began in the nineteenth century. This was also the earliest 40°C observed in France in recorded history, beating the previous record of 21 June in 2003.

The level of heat for this early in summer is unprecedented, and is now beating all-time records in places, meteorologist Scott Duncan said.

Temperature also reached record levels across Germany and Central Europe. The city of Cottbus south of Berlin recorded its highest temperature, for any month, since records began in 1888 of 39.2°C on 19 June.

While heatwaves are not new in Europe, what is different are their record levels and their earlier arrival in summer, which provide further evidence of climate change and global warming.

The high temperatures also threaten water supplies across the continent, while also acting as a major public health problem, with vulnerable people more likely to suffer and even die in intense heat.

This follow high temperatures elsewhere in 2022. In April, India and Pakistan also posted record temperatures reaching into the 50s, with peaks of up to 65°C. This has pushed up demand for electricity and air conditioning, causing water shortages in agriculture and threatening future food supply constraints.

Such an extreme climate event highlights how developing countries such as India are exposed to the effects of climate change, including high temperatures, drought and high migration levels.

A temperature of 38°C in the Verkhoyansk settlement, which is 115 km inside the Arctic Circle, on June 20, 2020 was the highest ever recorded in the region.

Temperatures in Russia’s northern regions are rising three times faster than in the rest of the world as Russia’s weather goes crazy. Russia’s permafrost is melting, which could cause up to $1 trillion worth of damage to the urban and energy infrastructure in the frozen hinterland.

The records seen in 2022 follow on from record temperatures and other climate-change markers such as sea levels and ocean heat in 2021.

The World Meteorological Organization’s (WMO) State of the Global Climate in 2021 report said that the past seven years had been the warmest seven years on record. The average global temperature in 2021 was about 1.11 (± 0.13) °C above the pre-industrial level.

The WMO warned in May that human activity had caused irrevocable damage to the climate, causing hundreds of billions of dollars of economic damage and threatening water and food supplies to millions of people.

Meanwhile, on 18 June the Land Surface Temperature (LST) reached peaks of ️49° ️in Southeast France and Northeast Spain and 51°C Sardinia, according to data from the EU Copernicus satellite.

However, LST is generally slightly higher than air temperature, the normal measure of temperature.

The intense heatwave has also spread to Italy, where water reserves in such areas as the Po plain and the Alps are drying up, after little snowfall in winter 2022.

This means that Europe could face severe water shortages as water levels drop.

Given that India is also facing food shortages and even record migration levels, the high temperatures could have a devastating effect on human habitation in both developing countries in Asia and Africa and in wealthier states in Europe.

The Vjosa is one of the last wild rivers in Europe and environmental groups have been campaigning to have it made a national park to prevent it being exploited for hydropower.