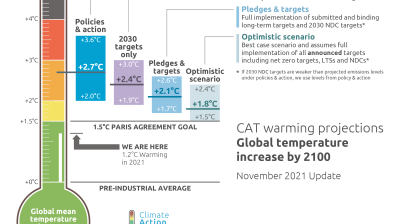 The first week of COP26 was dominated by grand statements by governments, and a number of sector-specific targets covering methane, coal and deforestation.

However, to use the words of diplomacy, it was a multi-lateral world, with a number of agreements that some countries signed up to, but some did not.

The host country led this movement, announcing a host of agreements, initiatives, funding decisions and policies affecting this country and that.

However, China and Russia were noticeable by their low profile, supporting some issues but basically avoiding the main speakers’ podiums

The second week will be more technical, but in terms of the conference itself and the creation of a global climate change management system, it will be far more important.

Although coal, temperatures and emissions are key metrics, there will be greater attention focused on more malleable concepts such as adaptation, loss and damage and climate justice.

At the end of the week, what is in the document will be judged on whether it can meet the 1.5-degree target by 2100.

Well publicised stepping stones such as net zero for individual countries, whether in 2050, 2060 and or 2070, are useful indicators of how different governments view their progress.

But the most urgent issue is setting and meeting 2030 targets. While governments have been willing to set out longest-term commitments dated 2050, 2060 or 2060, it will be more difficult, but more important, to meet 2030 benchmarks for ending coal and reducing emissions.

Climate Action Tracker this week warned that 2030 targets as they stand will create global warming of 2.4˚C by 2100, while current policy commitments put global warming at 2.7˚C.

What is needed is for the announcements and positive rhetoric seen in the first week to translate into hard commitments that will slash emissions, keep 1.5 degrees alive and put in place a comprehensive package of funding.

ING: Back to the 80s? What soaring inflation, US rate hikes and a stronger dollar mean for EM sovereign debt

EM debt crisis around the corner

ING: Back to the 80s? What soaring inflation, US rate hikes and a stronger dollar mean for EM sovereign debt
EM debt crisis around the corner
bneGREEN: Zero-carbon housing a key battleground for climate change

bneGREEN: Fit for 55 – not fit for purpose
5 days ago
bneGREEN: Slovenia’s Sigma Energy deploys device to convert sea waves into electricity
17 days ago
bneGreen: Southeast Europe’s first eco-mosque opens in Croatia
24 days ago
bneGREEN: Europe pays what it takes to bring in LNG but still cannot get enough
26 days ago
bneGREEN: Baltic states – except Russia – agree to aim for seven-fold increase in offshore wind
1 month ago