BEYOND THE BOSPORUS: Erdogan fires his Russian missiles into a fog of confusion 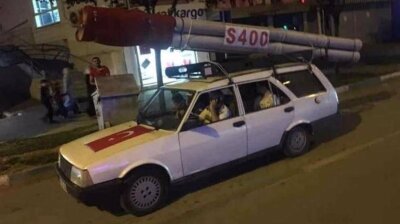 Will the West learn to stop worrying and love Erdogan's missiles?
By Akin Nazli in Belgrade October 17, 2020

Turkey on October 16 reportedly test-fired S-400 missiles that it last year acquired from Russia despite US and Nato opposition to the purchase from the Kremlin. During a test exercise on the Black Sea coast, three missiles hit the designated targets, Russia’s state-owned news service TASS reported.

Reuters, on the afternoon of October 16, also reported that Turkey fired the missiles. However, Turkey’s defence ministry told the news service that “it would neither deny nor confirm missile tests”.

There was no immediate condemnation from the US. The US reaction was in fact muted and less than clear. An unnamed US official, speaking on condition of anonymity, confirmed to Reuters that the US believed Turkey had tested the S-400 missile defence system, but they did not provide details.

US State Department spokesperson Morgan Ortagus, meanwhile, said that “if confirmed”, the department would condemn Turkey.

US senators, who have worked towards sanctioning Turkey since it signed the S-400 purchase agreement in 2017 but have not been encouraged by US President Donald Trump who has more than once remarked that he “gets on well” with authoritarian Turkish counterpart Recep Tayyip Erdogan, put out some political and diplomatic statements for the newswires in the wake of the missile tests.

The US media came across as perplexed. The New York Times, for instance, suggested that while Turkey fired S-400 missiles, it did not actually activate its S-400 air defence system, though “the test launch has brought Turkey closer to activating the system”. This is a key point. Despite the disquiet at Turkey having acquired the system in the first place—partly because of the valuable performance data it could hypothetically gather on Nato member countries’ fighter jets—politicians have been able to hold off pressing for sanctions with unyielding conviction while the system remains ‘switched off’.

The build-up to the reported missile tests saw Turkey on October 6 transport the Russian missiles from Ankara to Sinop province on the Black Sea Coast. It then filed a Notice to Airmen (NOTAM) potential hazards alert and a Navigational Telex (NAVTEX), providing an urgent alert to ships not to enter a certain area in order to ensure maritime safety.

The NOTAM was in place for six hours on October 16 while the NAVTEX was filed to cover October 16 and 17.

CNN quoted Pentagon spokesman Jonathan Hoffman as saying that the Pentagon was aware of media reports on the S-400 tests and, “if accurate”, it would strongly condemn the move.

The comments from these US spokespersons imply that the US State Department, Pentagon and other parts of the American security establishment are relying on the media to determine whether Turkey has actually conducted this rather significant exercise. It is of course a ridiculous proposition. One would think a US ‘spy in the sky’ or another source of intelligence might have determined what’s what with minimal delay. But given the difficulties even US officials have of isolating what US foreign policy actually is with ‘carnival barker’ Trump at the helm, perhaps it suits these officials to indicate the slowness of the US response is down to scratchy media coverage.

If there is any seriousness still to be had here, Serhat Guvenc, a professor in the international relations department of Istanbul’s Kadir Has University, has told Medyascope that Ankara has shown its willingness to bear all the consequences of its S-400 actions and that it was now up to the US to say what it wants to do about these matters.

Erdogan on October 17 was due on a Turkish drilling vessel on the Black Sea to announce that a natural gas discovery Turkey lately declared is even bigger than previously assessed.

Turkey watchers will look for whether he manages to convince the US that he fired the S-400s.

The market reaction to the missile testing on October 16 was restrained as no-one could clearly grasp what had occurred. The USD/TRY rate went through a ‘traditional’ droop on news of the missile firing to below the 7.90-level but then jumped back to nudge territory around its all-time 7.95 weak rate versus the dollar.

But the government’s ‘invisible hand’ will no doubt be at work, supporting Turkish asset prices as shrugging Erdogan administration officials seek to send the message that Turkey has fired the missiles and nothing has happened.

The course further ahead will depend on the US reaction, and the Turkish government’s ability to keep the markets and politics under control.

On the international politics front, Erdogan’s move suggests that expectations are strengthening for chaos in the US ahead of its November 3 presidential election. And Erdogan wouldn’t like anyone else to take pole position in testing that growing anticipation. A US preoccupied with itself presents opportunities in one's own backyard. Who amid the frenetic Trump-Biden title fight has got time for Turkey?

It could just be that Erdogan is convinced Joe Biden is set to win and that he won’t be able to persuade the new president to lay off on sanctions. So, he’s setting out on a new, affirmed authoritarian path. Might it mean full-blown authoritarianism and unlawfulness is ahead for Turkish society? Turks have remained convinced throughout the past decade that things can go so far, but they can’t go any further…

If Erdogan was betting on a Trump win, he’d most probably hesitate in giving his populist pal in the Oval Office (it’s said that Erdogan’s numerous calls are always put through by the White House switchboard) another headache prior to big polling day.

On the markets, the initial reaction to Erdogan’s latest events might be best seen in Turkey’s five-year credit default swaps (CDS) and eurobond prices, if the government has not gotten ready to defend those fronts too.

An interesting indication of how the government is seeing the issue arrives with a report from local financial news outlet BloombergHT. Following the rash of S-400 stories that were put out by other news services, it reported how Turkish Finance Minister and Erdogan son-in-law Berat Albayrak will on October 27 attend an investors meeting organised by American investment bank Citigroup.

Erdogan has fired his S-400s. Everything is normal. The US system is digesting developments. Will it be able to stomach this latest normality as presented by the palace in Ankara? Or is a different normality to prevail?