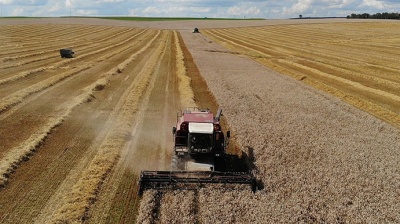 On February 1, Lithuania terminated its transport agreement between the state-owned railway company Lithuanian Railways and Belarusian potash giant Belaruskali. Since then, further sanctions and the war in Ukraine have hindered Belarus in getting its potash out to international markets throughout the year.

Potash fertilisers constitute 10% of Belarus' exports and are a vital foreign currency earner for the regime. However, this stop hasn’t only caused a headache in Minsk but also around the world, as Belarus is the world’s third-largest producer of Potash fertilisers.

Brazil, which imports about 20% of its fertilisers from Belarus, had to cancel its imports after Lithuania halted transits. This resulted in Brazil’s agriculture minister declaring fertilisers a matter of national security and made the country look into developing its own production and exploiting the largest potash mine in Latin America.

According to one estimate, Belarus’ cumulative exports of potash fertilisers was 2mn tonnes lower in August 2022 than for the same month last year, and are not expected to increase. While Belarus is allegedly exporting potash and other EU and US sanctioned products to world markets through Russian ports, these ports are unable to come close to the necessary volume that Belarus needs to export.

Belarus’ inability to exploit the rising prices on the world market today is already putting a strain on its state budget and FX-reserves, but the effects from this year’s export downturn will be even more notable next year.

State-owned Belarusian media has portrayed the harvest as having gone exceptionally well. However, there are several indications for saying otherwise.

First of all, Lukashenko quite early on in the summer prohibited the export of grain out of Belarus. In July, Lukashenko made a comment which indicated that Belarus was importing grain from Russian-occupied Ukrainian territories. In late August, Russia formally sold Belarus 500,000 tonnes of grain.

Throughout 2022, Lukashenko, along with various other officials, has repeatedly said that there needs to be an improvement in the work ethic around the country’s state-owned farms.

During a plenary session on land amelioration on November 11, Lukashenko noted that 20 districts had shut down their own land amelioration enterprises and as a result, 3,500 people had stopped working there during the last six years. Lukashenko scolded the regional officials for this by saying that “we can’t do anything without people.”

Another problem was that state producers of farm machinery weren’t providing the repairs for the districts’ machines. For this, “We will shake up everyone and everyone will be held accountable,” Lukashenko said.

While one can’t do anything without people, one can do a lot with a little less people and more efficiency. Increasing labour costs for the regions and forcing state-owned farm machine manufacturers to provide free repairs for state-owned farms will not make the state or any regional budget go around.

Belarusian state-owned agricultural equipment manufacturer Gomselmash will be one of the Belarusian SOEs to receive a part of Russia’s $1.7bn loan to Belarus for import-substitution purposes. Today, unconfirmed reports from independent Belarusian media said that Gomselmash would provide technical assistance in repairing Russian military equipment.

If this turns out to be true, there are probably even more back doors for hiding support for Russia’s invasion of Ukraine under the guise of this new loan agreement; in which case, Belarus’ agricultural industry is unlikely to be the only industry that will be de-prioritised in favour of the Russian armed forces.

According to Belarus’ National Statistical Committee, the output of all agricultural producers in Belarus totalled BYN29.6bn (approx. $11.6bn) between January-October 2022 – a year-on-year increase of 3.5%. Belarus’ agricultural trade with China has especially boomed this year, according to one Belarusian official it's up by 50% since 2021.

In August, Lukashenko called for Belarus to develop its own food packaging production by 2023. During a working trip in September, Lukashenko told state media that further modernisation was the main task for Belarusian agriculture. In general, Lukashenko’s views on production adheres to the camp of “self-reliance”, where he believes that Belarus should produce more on its own. Back then, he said that while half of the country’s farms were working well, half of them could only survive with state support.

Belarusian Agricultural Minister Igor Brylov has vowed to bring about considerable increases to Belarus’ agricultural production in the coming years. This growth would be achieved by diversifying markets, renovation of dairy and cattle complexes and through the introduction of modern technology.

Back then, bne IntelliNews reported that the agricultural sector could also suffer from Western sanctions against dual-use technology imports.

First, these the dual-use technology import sanctions are clearly taking their toll, as Gomselmash will receive a part of Russia’s import-substitution loan. Secondly, if SOEs like Gomselmash begin to service Russian military equipment they also risk direct sanctions. While the West has generally avoided sanctions against Russian and Belarusian agricultural products, so as to not create a global food crisis, it might not be so lenient towards agricultural technology producers.

Considering the broad economic downturn Belarus manufacturing sector is experiencing today, maintaining and increasing growth where it possibly can is important. Since most other sectors (except for IT) have shown negative growth this year, Belarus is obviously focusing media coverage and resources on one of its traditionally competitive sectors – agriculture.

Belarus has a high competitive advantage in processed food products and has had so for decades, especially among the post-Soviet countries. That Belarus is increasing its exports to China should also come as no surprise. Belarus’ agricultural products could likely make their way into many more markets across the world if it manages to establish proper trade routes.

In 2021, agriculture contributed just 6.8% to GDP, which can be compared to manufacturing industries and services contributing 32.15% and 48.31% each.

By moving into higher value chains through improved packaging capabilities or renovation of dairy and cattle complexes, Belarusian agriculture will hardly become a key driver of GDP growth. However, as other sectors of the economy shrink rapidly under direct or indirect financial sanctions, the agricultural sector could manage to increase its share.

Belarus’ efforts to modernise will help it maintain this competitive edge in the near future, but these efforts could be considerably slowed down if the sector is held back in favour of political decisions such as supporting Russia’s war effort.