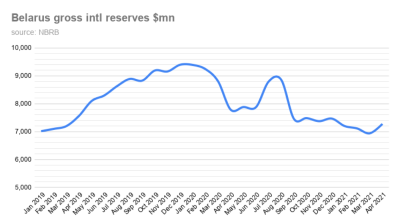 Belarus' gold and foreign currency reserves rose 4.9% to $7,2779mn as of 1 May, 2021, according to the preliminary data the National Bank of the Republic of Belarus published on May 7, as cited by BelTA.

That was despite the fact that the population bought $350mn more foreign currency than they sold in the first four months of this year, the central bank said.

Analysts feared Belarus would experience a run on its hard currency reserves after the population converted $1.5bn into dollars as widespread protests broke out following the disputed presidential election last August 9, but it seems fears of an economic crisis have faded.

In April 2021 the planned repayment of foreign and domestic obligations in foreign currency amounted to $105mn, according to the central bank.

According to the country's main monetary guidelines for 2021, the volume of international reserve assets is expected to make up at least $6bn on 1 January, 2022.

Nevertheless, the population remains nervous and is still buying foreign exchange to hold as savings as the conflict between the people of Belarus and the president continues.

In January-April 2021 Belarusians bought $348.9mn worth of foreign currency more than they sold, the NBRB stated on May 7, BelTA reports.