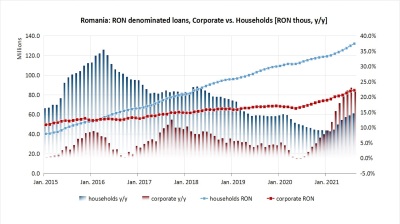 Out of this, more than two-thirds (RON220bn) was local currency-denominated loans, which increased by 17.5% y/y.

Corporate lending gained momentum thanks to the COVID-19 support package over the past year, but as the subsidies are phased out and economic activity returns to normal, retail lending (consumer, mortgage) is gradually returning as the driving force behind the overall advance of the bank lending.

Thus, the corporate (local currency-denominated) loans maintained an annual growth rate of above 20% y/y (+22.1% y/y at end-August) significantly above the annual growth of the retail loans (+14.6% y/y).

Before the crisis, retail lending used to be by far the biggest driver of bank lending. Even now, as of August, the stock of retail loans (RON132.0bn) was 38% bigger than the stock of corporate loans (RON88.9bn).

However, the market will sooner or later return to the pre-crisis pattern: corporate lending has advanced at comparatively slower rates in recent months: +0.8% m/m in August, compared to +1.6% m/m advance of the retail loans.

This is not yet a trend, since until August corporate lending was still growing at stronger monthly rates. But retail lending is visibly gaining ground (from +9% y/y in January) and has returned to annual growth rates closer to those demonstrated by the corporate lending that still benefits from government support.

Russia's services PMI falls for second month due to impact of coronavirus
18 hours ago
Romania’s industrial prices surge by 26.8% y/y in October
19 hours ago
Service sector and public spending save Hungary’s Q3 GDP
1 day ago
Kazakh manufacturing PMI shows return to contraction in November
1 day ago
Poland’s PMI climbs to highest point since August
1 day ago