BALKAN BLOG: The team from a land that doesn't exist 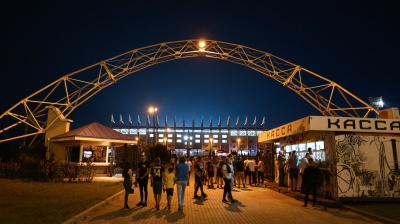 As the FC Sheriff Tiraspol football team closes in on a place in the UEFA Champions League, it has frequently been portrayed as a plucky outsider from a small country on the edge of Europe. In fact, the club is backed by the powerful holding company that controls much of the economy and political scene in the Moldovan separatist republic of Transnistria.

The club hails from Tiraspol, the capital of the unrecognised republic that broke away from Chisinau’s control in a four-month war in 1992, and has been de facto independent with Russian military and economic support ever since. Transnistria occupies a narrow strip of territory between the eastern bank of the Dniestr river and the internationally recognised Moldovan border with Ukraine and has a population of around 469,000, after mass emigration over the last 30 years.

Sheriff Tiraspol has won the top Moldovan division, the Moldovan National Division, every year since the 2015-16 season and holds 19 titles altogether. Its starry roster of international players – its squad boasts players from as far afield as Colombia, Brazil and Malawi – contrasts with the all-Moldovan squad of the second-most successful team in the country, Zimbru Chisinau.

Sheriff Tiraspol is effectively becoming the international face of the obscure, unrecognised republic of Transnistria. This isn’t the club's first international experience; the team previously made it into the Europa League group stages in 2013 and 2017, as well as the play-off for the Champions League three times. This year, Sheriff Tiraspol had a successful run through the play-offs, culminating in its 3:0 victory against Dinamo Zagreb on August 18. Now Sheriff are just one match away from becoming the first Moldovan team to enter the Champions League, with their final match to be played against Dinamo Zagreb on August 25.

The Sheriff Stadium is highly visible when you come into Tiraspol, around 15 km from the de facto border with Chisinau-controlled Moldova. It cost a reported $200mn to build and is big enough to seat 12,746 people, almost one in 10 residents of the small city.

The huge modern stadium is a startling contrast to the 5-storey Soviet apartment buildings lining the leafy streets of Tiraspol, the Lenin statues still standing in prominent places, and the plinth-mounted tank commemorating those who died in conflicts from the Second World War to the Transnistrian war.

There are other visible signs of Sheriff’s presence in Tiraspol, where residents shop at Sheriff supermarkets and fill their cars at Sheriff petrol stations. Its slogan "Always with you!” is appropriate given its wide reach within the small Transnistrian economy.

The company was founded in the 1990s by Viktor Gushan (now its president) and Ilya Kazmaly, both former members of the special services.

This year it celebrated its 25th anniversary since opening the first Sheriff supermarket in 1996 in a region that at the time had no modern retail outlets. 25 years later, Sheriff has around 30 stores in Transnistria and 60,000 customers, according to a press release. It sells fuel to around 10,000 vehicles every day from 17 petrol stations. Aside from the stadium, it has built several high-profile construction projects, including the Sheriff sports complex and the Cathedral of the Nativity of Christ. It also controls a TV channel and a publishing company.

Transnistria’s complex geopolitical situation and resultant isolation helped Sheriff to establish a dominant presence in several sectors. Its management was understood to have had close links with former president Igor Smirnov, with the company supporting the government and getting tax breaks and other favours in return. Smirnov’s sons Vladmir and Oleg were believed to have particularly close links with the holding, though these were not officially confirmed.

However, from 2000, Sheriff started backing the Obnovlenie (Renewal) Party, and had an increasingly adversarial relationship with Smirnov. Transnistria’s next president, Yevgeny Shevchuk, was initially backed by Gushan, but later fell out with the powerful local businessman. After losing the 2016 presidential election to former interior minister Vadim Krasnoselski – who was backed by Sheriff – he was stripped of his parliamentary immunity and fled to Moldova.

With Krasnoselski in the presidency, Obnovlenie’s overwhelming victory in the 2020 parliament election – the party won 29 of the 31 seats and the remainder are held by MPs linked to the holding company – Sheriff’s grip on Transnistrian politics is complete. As bne IntelliNews reported at the time, Sheriff’s man Krasnoselski “now controls all branches of power”. On top of that, Sheriff is understood to exercise a high degree of control over Transnistrian courts too.

Transnistria, meanwhile, remains in limbo. Negotiations have been ongoing for years in the 5+2 format (Moldova and Transnistria, plus Russia, Ukraine and the OSCE as mediators, and the US and EU as observers) in an attempt to reach a peace settlement, but any progress in the talks has tended to be on specific issues such as movement of citizens and trade, rather than the fundamental question of whether Transnistria will ever rejoin Moldova and if so on what terms. Keeping Moldova divided weakens the government in Chisinau, in line with Moscow’s divide and rule strategy that it has pursued in other former Soviet countries such as Georgia and Ukraine. Meanwhile, successive Transnistrian leaderships have spoken out in favour of closer ties with Moscow rather than Chisinau – even while benefitting economically from Moldova’s Deep and Comprehensive Free Trade Area (DCFTA) deal with the EU that has allowed Transnistrian firms to reorientate their exports to the bloc.

The last Moldovan general election in July 2021 marked a significant change for Moldova as voters gave a landslide victory to President Maia Sandu’s Party of Action and Solidarity (PAS). Not only did this give a strong mandate for Sandu’s reforms especially in the anti-corruption area; it also ended the political chaos of recent years by producing a single party majority in the parliament. Nearly two-thirds of the 28,000 Transnistrians who voted in the election backed pro-Russian parties such as former president Igor Dodon’s Alliance of Socialists and Communists. However, 14% voted for the PAS, and “Overall – surprisingly – pro-European (or at least nominally pro-European) parties won over 20% of the vote in the separatist republic,” said an analysis by the Warsaw-based Office for Eastern Studies (OSW).

Transnistria didn’t come up much in the election campaign aside from a dispute over how Transnistrians might be allowed to vote, but the issue has repeatedly surfaced since the PAS’ victory as the pro-EU Sandu, now in full control of Moldova proper, renegotiates Chisinau’s relationship with Moscow.

The new government has said it is ready to co-operate with Russia, but has made clear it will protect its own interests, including by pushing for the removal of Russian troops from Transnistria. For their part, Russian officials, apparently fed up with working with Dodon, have indicated they are ready for a working relationship with the new guard in Chisinau.