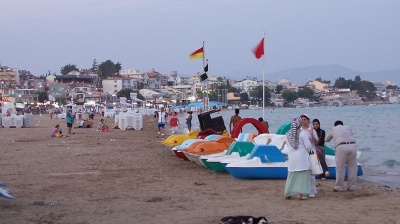 The Aegean Sea resort of Altinkum is one of many seaside destinations popular with UK tourists. / Steven Lek, public domain.
By bne IntelIiNews September 2, 2021

Furious British holidaymakers left with few sunshine vacation options because of coronavirus restrictions have signed a petition demanding that the UK government removes Turkey from its travel red list and places it on the amber list. As of September 2, there were more than 45,000 names on the petition. If the total reaches 100,000 signatures, the matter must be heard by parliament.

Turkey has been on the red list since early May, with UK officials worried by its coronavirus situation.

After British ministers once more declined to place Turkey on the amber list, the i on August 30 quoted travel expert Tim White as saying it was the UK government’s “widespread disbelief” of Turkey’s COVID-19 data that was the reason for it remaining on the red list.

“I can only deduce that [UK Secretary of State for Transport] Grant Shapps is suspicious of the figures,” he said.

Not all the signatories to the petition may be aware that last year Turkey’s health minister, Fahrettin Koca, admitted to changing the way the country reports coronavirus cases per day, switching the words “today’s number of cases” to “today’s number of patients”. Koca said the the word “patients” meant those who had tested positive and had symptoms of coronavirus—but those who tested positive and had no symptoms were not included in the table. The change led to the British government last October enforcing a mandatory quarantine on all arrivals in the UK from Turkey.

Despite Turkey’s dubious record in reporting its coronavirus infections, The Sun on September 2 cited data specialist Ben McCluskey as saying: "There is little justification for Turkey to remain on the red list given there are amber-listed countries with a higher seven-day incidence rate, such as France and Greece.

"Although the country’s place on the red list may have previously been justified, given the questions around credibility of Turkey’s data last summer and lack of genomic sequencing, it is no longer justified."

Prior to the UK deciding to keep Turkey on the red list in its latest “traffic light” review, staff at the Turkish embassy in London told Sky News: “The scientific data on Covid-19 supports our expectation that Turkey will be removed from the red list at the upcoming review.”

There is, meanwhile, speculation on the travel market that Shapps’s decision to keep Turkey red was related to fear of COVID-19 virus variants. Turkey is battling the delta and beta variants, while the head of the Izmir Medical Association has warned of a new, currently unnamed, variant emerging in the western regions.

As things stand, the UK Foreign Office is advising against all travel to Turkey, which invalidates travel insurance. There is no guarantee that the official travel advice will change, even if Turkey moves to amber.