An outpouring of grief, anger and frustration in Minsk as police beat another protester to death 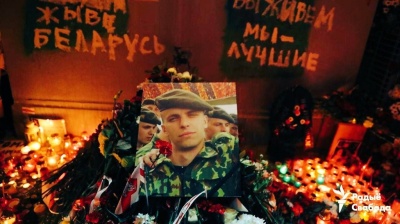 Belarusian protester Raman Bandarenka was beaten to death by police after he tried to prevent them cutting red and white ribbons off a fence in his yard / wiki
By Ben Aris in Berlin November 13, 2020 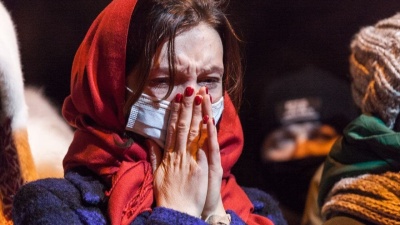 There was an outpouring of grief, frustration and anger in Belarus on November 12 after police beat to death another protester who was trying to stop the authorities from removing red and white ribbons from a fence in the “Square of Change.”

The 31-year-old Raman Bandarenka was brutally beaten by police after he tried to stop them cutting off red and white ribbons that residents around the Peremen square where he lived had tied to a fence as a sign of protest against Belarus' self-appointed President Alexander Lukashenko, who massively falsified the August 9 presidential election to give himself a landslide win.

Bandarenka was bundled into a police van and taken to hospital after an hour and half with head injuries, from which he died later the same day. 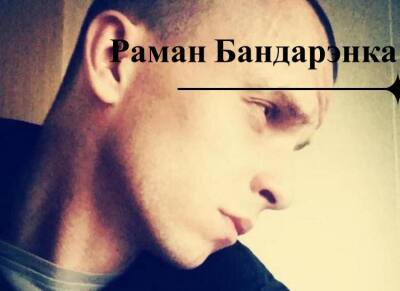 Bandarenka was well-liked and as an artist, he taught local children how to draw. Several of his pupils made him "Get Well Soon" cards, unaware that he had already died.

“"I am 9 years old today. Roma, I wish you to come back and teach us to draw,” Masha, one of his students, said on a painting she made for Bandarenka and hung on the fence after he had been arrested. 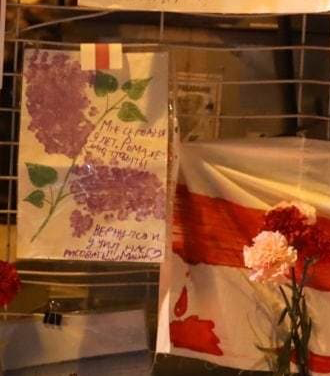 The killing immediately sparked protests as residents of Minsk gathered to mourn Bandarenka, and they have called for a national day of mourning to begin today. At 12 pm Minsk time church bells will ring and a Nationwide Minute of Silence will take place.

“People are gathering all over Minsk. It is one [of] the most shocking deaths in the recent months. Raman was killed for simply daring to gather in his own neighbourhood. It is another red line that has been crossed,” tweeted Hanna Liubakova, a local journalist.

A large crowd gathered on the square, where Bandarenka lived, bearing candles and lighted phones as night fell. The local residents quickly replenished the ribbons on the fence that caused Bandarenka's death in an act of defiance to the authorities. Although the active protests have lost thier momentum, the people remain unswayed in their opposition to Lukashenko.

The square has become an icon in the resistance to Lukashenko's rule. It has been renamed by local residents as the "Square of Change" and become famous, as it is also home to a mural of the two DJs that defied the government by playing famous Soviet rock singer Viktor Tsoi’s popular song “Changes” at a government-sponsored concert shortly before the elections that has become an anthem for the protest movement. The iconic mural of the two DJs has been painted over by the authorities on multiple occasions only to be repainted by residents during the night. 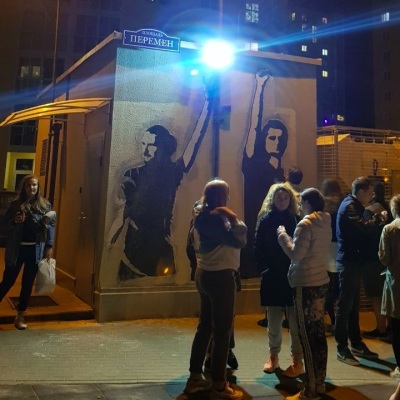 The authorities sent buses full of police officers to break up the impromptu demonstration, but residents gathered in front of the buses and blocked them from entering the square.

“We will stop this fascism!" neighbours of the murdered Bandarenko chanted at the police as they tried to exit their bus.

Tikhanovskaya made a statement from her base in Lithuania where she was forced into exile by the government.

“My heart is broken. I want to address the mother of Raman Bandarenka, who was killed today by Lukashenka's bandits: your son has become an innocent victim of a terrible system. But for us he will forever be the hero. We will continue fighting for your son and freedom in Belarus,” Tikhanovskaya said in a tweet. “I ask the nations of the free world to support #Belarus. The sanctions list must be expanded. An intern. investigation must be initiated. Political prisoners, activists, journalists, striking workers, artists need your solidarity. Our goal remains the same – free & fair elections.”

Bandarenka's sister also made a short tearful statement in a video posted on social media: “I know for sure from witnesses that everything that happened to Raman, happened after he was detained. I'm recording this video for the world to know how helpless [the] Belarus people are against lawlessness and we're looking for justice.”

The protest movement has lost its momentum after opposition leader Svetlana Tikhanovskaya threw down a “People’s Ultimatum” and called for a general strike to begin on October 26, which has largely failed.

The number of people that came out on the traditional Sunday mass demonstration last weekend has dwindled into a few tens of thousands – a crowd size small enough for the state’s police and OMON riot police to control.

At the same time, Lukashenko has ratcheted up the violence, with police increasingly using stun grenades, tear gas and beatings to discourage protests. Last week more than 1,000 people were detained, the highest number since the first days of protests broke out in August.

And on November 11 Lukashenko announced that the law had been changed. Demonstrating, insulting police officers and resisting arrest have now been made criminal charges, up from administrative misdemeanours which carry sentences that can stretch into years rather than the 15 days administrative charges carry. Last month officials from the Ministry of the Interior also warned that it might use live ammunition on “radical protests” as Lukashenko desperately tries to regain control of the streets.

In parallel, the oppression of the opposition continues. At least five prominent student activists were arrested on November 12 and taken to the notorious KGB pre-trial detention centre in Minsk.

“Among them is Alana Gebremariam, a member of the Co-ordination Council, [Tikhanovskaya’s] representative for youth and students. Security forces are suppressing students' movement,” reported Liubakova. 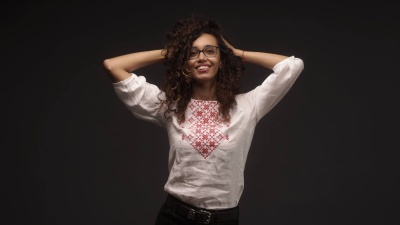 The international community has also become frustrated at its helplessness to do anything to bring the political crisis in Belarus to an end. The EU and other Western powers have imposed sanctions on some 40 prominent members of Lukashenko’s administration, including the president himself, to little effect.

“Belarus reeling again as a young protester dies in hospital after being beaten senselessly to a pulp by the regime's thugs. Question is, will anything change in Minsk 3 months after Lukashenko rigged the presidential elections. Western sanctions and condemnation are not working,” tweeted Jason Corcoran, a bne IntelliNews contributor who has been following the events closely.