A third of Russians believe that Russia’s Putin has never abused his power, Levada poll shows 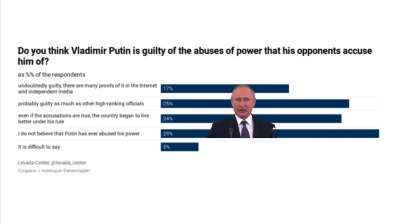 A third of Russians believe that Russia’s Putin has never abused his power and another quarter don't care if he has, as their lives have improved under his rule. / Levada
By bne IntelliNews February 10, 2021

Russia’s independent pollster the Levada Center conducted a wide-ranging poll in February probing the Russians’ perception of President Vladimir Putin’s probity in the wake of the release of activist Alexey Navalny’s “Putin’s Palace” video that accuses the president of massive corruption.

The Kremlin has faced down countrywide protests in recent weeks and Navalny was jailed for 2.8 years in prison in what is widely seen as a politically motivated sentence. However, unlike Belarus' self-appointed President Alexander Lukashenko, according to the Levada survey Putin retains a loyal core of supporters and Russians remain divided over Navalny and his documentary.

"According to the survey results, Navalny’s approval rating has barely moved since September, dropping one percentage point from 20% to 19%. The share of Russians that disapprove of Navalny’s actions, however, has increased from 50% to 56%. It’s worth noting that even among Russia’s youth (age 18-24), more people disapprove of Navalny than approve (43% vs. 36%). Unsurprisingly, there’s a wide range in attitudes toward the opposition leader based on media sources. Only 11% of those who get their news from television approve of Navalny, versus 45% of those who get their news from Telegram channels," BMB Russia said in a note.

One in three Russians believe that Putin has never abused his power and another quarter say that even if he has they don't care, as their lives have become better under him. Russians continue to compare Putin’s rule with life in the chaotic 90s under Boris Yeltsin, when the economy had entirely collapsed. Putin brought a decade and a half of growth and prosperity until the economy stalled in 2013 and incomes began to decline again.

“The palace for Putin” was watched by many more respondents than the film “Don’t call him Dimon” in 2017: then only 7% of respondents watched the investigation, and the majority (62%) did not hear about it at all,” Levada said on its website, referring to another Navalny documentary into the corruption of former prime minister and president Dmitry Medvedev.

Among those for whom television is the main source of news, 19% had watched the film. Among those who consider social networks their main source of information – 36%, Internet publications – 39%, Telegram channels – 61%.

“The vast majority of those who watched the film, know its content, or at least heard about it (77%), did not change their attitude towards the president after the premiere. For 17%, the attitude worsened; for 3% it improved,” Levada said.

Almost a third of respondents (29%) believe that Putin has never abused his power. Another 24% are sure that even if such accusations are true, the country began to live better under his rule. 17% believe that Vladimir Putin is definitely guilty of abuses and 25% that he is as guilty as other high-ranking officials.

Young people (18-24 years old) are more confident that the president is guilty, with 25% holding this opinion. The respondents aged 55 and older are the least likely to think so (13%). TV viewers are least sure of this (11%), whereas those who read Internet publications and telegram channels are the most sure of the president’s guiltiness (25% and 35% respectively).

The survey was conducted January 29-February 2, 2021, among a representative sample of Russian urban and rural residents. The sample was comprised of 1,600 people aged 18 or older in 137 municipalities of 50 regions of the Russian Federation. The survey was conducted as a personal interview in respondents’ homes. The answer distribution is presented as percentages of the total number of participants along with data from previous surveys.

The survey of 2017 was conducted on March 31-April 3, 2017, among a representative sample of all Russian urban and rural residents. The sample was comprised of 1,616 people aged 18 or older in 137 municipalities of 48 regions of the Russian Federation. The survey was conducted as a personal interview in respondents’ homes. The answer distribution is presented as percentages of the total number of participants along with data from previous surveys. 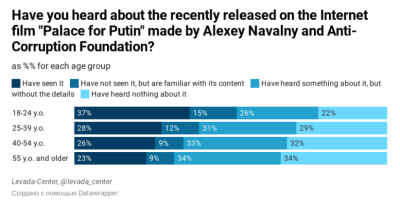 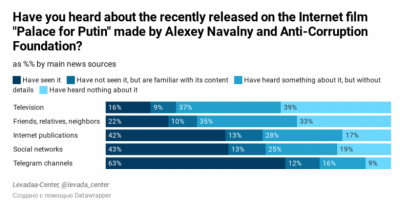 Government claims three quarters of foreign companies in Russia are still working
6 hours ago
Moldova says it won't be able to make next payment to Gazprom
7 hours ago
Russia resumes oil supplies to Slovakia and Hungary but imports to Czechia remain halted
7 hours ago
US charges Iran operative with plotting to kill former Trump hawk John Bolton
15 hours ago
Ukraine will receive $5.5bn in support from the US later this month
1 day ago