A heady week of sporting and diplomatic success for Croatia 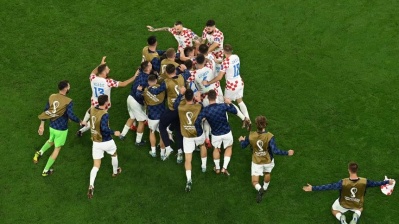 Croatia celebrate their victory over Brazil in the 2022 World Cup. / FIFA
By bne IntelliNews December 12, 2022

It’s approaching 10 years since Croatia joined the EU, on January 1, 2013, and Croatia will mark that anniversary by adopting the EU single currency. Not only has the EU’s newest member leapfrogged over previous entrants to join the Eurozone and, as of December 8, got the green light to join the Schengen area, it has also made it to the semi-final of the World Cup for the second time running.

The small country of just under 3.9mn people will see its national team play Argentina, one of the Latin American footballing greats, in the semi-final of the Qatar World Cup on December 13. Croatians will be hoping and praying that the national team will do even better than four years ago, when it stormed through the 2018 World Cup in Russia all the way to the final.

It already made it through the group stages before knocking first Japan and then former champions Brazil out of the tournament, both times on penalties.

This year’s tournament was only marred by disciplinary fines imposed by FIFA over fans' abuse of the Canadian goalkeeper in a bad-tempered group stage match.

A boost for the economy

Croatia’s success in the World Cup so far is expected to give a further boost to consumption -- the previous championship showed that sales of beer, snacks, TVs and other products shot up as the country advanced towards the final -- following a year during which the recovery of the tourism sector post-pandemic helped Croatia to become one of the fastest growing economies in the Emerging Europe region. At the same time, investments into energy infrastructure, including a floating liquefied natural gas (FLNG) terminal off the island of Krk, helped it avoid the worst of the fallout from Russia’s invasion of Ukraine and the subsequent sanctions.

As it heads for an expected slowdown in 2023, a spike in consumer spending around the World Cup, like the one it experienced in the 2018 tournament, would give the slowing economy a welcome boost.

As their team advanced in 2018, Croatians splashed out, spending hundreds of millions of kuna more than during a typical summer month. In total, spending during the championship, which lasted from June 14 to July 15, 2018, increased by an estimated HRK2bn (€270mn) on the year.

Croatia’s run of success also raised its international profile, with people all around the world googling the country. That in turn boosted tourism, one of the country’s key economic sectors and an important contributor to GDP.

From a broader perspective, after being torn apart by war in the 1990s, Croatia has reinvented itself as a highly appealing tourist destination, offering a combination of traditional beach holidays with culture and historic seaside towns.

Despite its very slow recovery from the Great Recession of the late noughties and scandals like the collapse of Agrokor, one of Southeast Europe’s biggest retail and food groups, Croatia’s economy has grown steadily in recent years.

It has also become increasingly active in the high tech sector, spawning electric supercar pioneer Rimac, now working with major international automakers and luxury car brands, and whose youthful founder Mate Rimac is a highly feted entrepreneur. There is also the lower profile but also very successful software company Infobip, and several other companies that have attracted international venture capital or strategic investors.

Among the core EU countries

Croatia also rounded off the year with its long-sought after admission to the EU’s borderless Schengen area. Along with its entry to the Eurozone on January 1, that puts Croatia, despite being the newest member of the EU, among the core members of the bloc. It’s something already achieved by Slovenia, the richest country from emerging Europe in per capita terms, but which fellow Southeast European members Bulgaria and Romania have signally failed to achieve.

The country’s accession was hailed by the government in Zagreb. Prime Minister Andrej Plenkovic called it a "great political achievement for the benefit of all citizens".

From January 1, all land borders with fellow Schengen members will be removed. Croatia will also start to issue Schengen visas and will be able to make full use of the Schengen Information System. Air borders will be removed from March 26, given the need for this to coincide with the dates of the IATA summer/winter time schedule.

By contrast, Bulgaria and Romania, despite being admitted to the EU a full six years before Croatia, were left smarting when their efforts to join Schengen were vetoed by Austria, and in Bulgaria’s case the Netherlands too. Enraged at what is widely seen in Romania as xenophobic discrimination, Romanians launched a #boycottAustria social media campaign aimed at punishing Austrian businesses for their government’s actions, that quickly went viral.

Croatia, meanwhile, is preparing to join both the Eurozone and the Schengen area. The country started producing euro coins and notes earlier this year, and since September local businesses have been displaying prices in both kuna and euros.

But before January 1, Croatia faces its critical match against Argentina, which will determine whether one of the smallest nations to play in this year’s World Cup will get its second shot at winning the final.

Could casinos be a jackpot for Mongolia’s struggling economy?
4 hours ago
Africa rallies to Russia’s rescue as EU bans the import of oil products
7 hours ago
Kazakhstan: Swathes of land confiscated from Nazarbayev’s brother ahead of vote
1 day ago
Wolt couriers in Tbilisi go on strike
1 day ago
Jury still out on the effectiveness of the oil price cap scheme on Russian exports
1 day ago