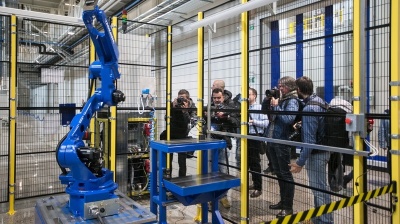 Japanese technology group Yaskawa opened its new robot factory and European robotics development centre in the Slovenian town of Kocevje on May 6.

The €25mn factory was opened due to growing demand for industrial robots in Europe, Russia, the Middle East and Africa. The Central and Eastern European market, while smaller than the markets of Western Europe, North America or Asia, is experiencing fast growth as companies look to automation and robotisation in response to growing labour shortages.

“Our goal is to shorten supply chains and delivery times, to enable us to react faster to regional market requirements and our customers’ wishes – not only with the new plant, but also with a major European robotics development centre,” said Masahiro Ogawa, executive officer of Yaskawa Electric Corp. in his address at the opening ceremony.

The company noted that in relocating its technological know-how and production competence from Asia to Europe, it is “consciously acting against the international trend”, as it pursues an ambitious expansion strategy in Europe.

The latest World Robotics Report shows that shipments to the CEE region increased by 35% compared to global growth of 30% last year. The rise in shipments of industrial robots to the CEE region is expected to continue going strong at 28% in 2018, compared to just 10% globally, followed by a compound annual growth rate (CAGR) of 22% between 2019 and 2021 (CAGR of 14% worldwide).

The Kocevje factory is Yaskawa’s third for Motoman industrial robots, and facility was opened following two years of construction. It will employ 200 people.

The new plant supplements the existing production facilities in Japan and China and will satisfy about 80% of the European demand for Motoman robots, the company said. The factory in Kocevje is expected to produce 10,000 industrial robots per year.

The investment has been co-funded by the state, which contributed €5.6mn. “We will do our best to ensure that Slovenia remains an attractive investment location,” said Prime Minister Marjan Sarec, who attended the ceremony.

Most of the robots to be built there will be the current Motoman GP series with a payload of 7kg to 225kg, according to Yaskawa’s press release. The GP series includes compact and extremely efficient handling robots for high-speed joining, packaging and general handling applications, it added.