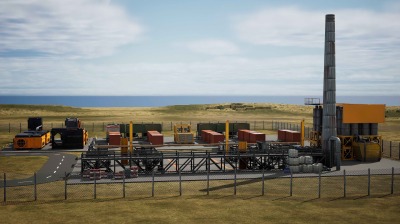 ClusterPower, a company founded in 2019 by Romanian entrepreneurs Cosmin Georgescu, Vladimir Ester and Carmen Ursa Georgescu, started work on what is planned to be the largest data centre in Romania and aims to become the first hyperscale data centre in the region, in Mischii, Dolj County in July.

Although there is no precise definition, a hyperscale data centre generally exceeds 5,000 servers and 1,000 square metres — a threshold that ClusterPower will exceed with its investment. With a footprint of 25,000 square metres, the Cluster Power technology park will host a one-stop-shop Artificial Intelligence infrastructure centre developed in partnership with Nvidia.

The initial investment is RON172mn (€35mn) of which half is provided by a state grant extended last year by the ministry of finance.

The first phase of the project involves building the utility infrastructure for the IT equipment. This includes casting the foundation, construction of the power plant and the first unit of the project. The data centre will become the strongest communication hub in the region, having direct optical fibre connection to Frankfurt and Amsterdam and connectivity with 750 data centres worldwide.

Approximately 40 people are working on site and the construction of the first module is expected to be completed in December 2021.

“Some of the most prestigious and experienced engineers and equipment suppliers in the world are working alongside us, which strengthens our conviction that our investment will be a reference point in Romania's development,” said Cosmin Georgescu, founder and CEO of ClusterPower.

The teams involved in the project come from Romania, the US, Germany, UK, Austria and the Czech Republic, and their related global support centres.

The project is only at the beginning, Georgescu stressed, adding that after finalising the first phases of construction in December 2021, ClusterPower will become the largest provider of Cloud and Compute in Eastern Europe.