What now for Belarusian potash? 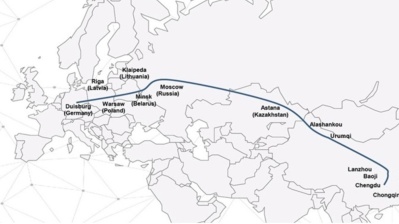 Lithuania was in the forefront of the sanctions implementation, as most of Belarus’ potash exports went through its port of Klaipeda; it is also one of the Belarusian regime’s strongest political opponents on the international arena. However, there was no easy way for Lithuanian railways to stop the transit of Belarusian potash and adhere to the US sanctions, since it had already signed a contract stretching until 2023 with Belarusian potash giant Belaruskali. The Lithuanian government solved this by breaking the contract, citing national security concerns while also declining attempts from other Belarusian companies to sign a new one.

On Tuesday, 15 February reports came in about Ukraine banning the transit of Belarusian potash through its ports and the sale of it to Ukraine’s very large agricultural sector. However, it’s worth noting that the Ukrainian trade restrictions for Belarusian potash only apply to products sold by Belaruskali or Belarusian Potash Company. By the wording of the restrictions, it therefore seems as if these companies could solve this problem by establishing subsidiaries who could get access to the Ukrainian market and its ports. Nevertheless, it severely complicates things for Belarus’ potash industry, one of the country’s most important income sources of foreign currency.

It has long been speculated that Putin has been plotting to take over Belaruskali together with Russian oligarch Dmitry Mazepin. Now Belaruskali has become increasingly pressed since being cut off from its shipping routes to both the west and the east, making it hard for it to reach main export destinations such as Morocco and India.

Instead, Belaruskali’s only option seems to be trade through Russian ports. However, neither these ports nor the transport routes from Belarus’ to them have the capacity to handle Belarus’ large quantities of potash. Besides, these are already full of Russian export products. If Belaruskali wants a piece of the cake it will have to invest enormous amounts into developing Russian port capacities or strike some kind of deal with the Russian companies, which makes Belaruskali vulnerable to Russian business interests.

However, the head of the Uralhim Group, Dmitry Koniayev, told Reuters on Wednesday that “We are not considering the development of potash assets outside of Perm Krai. Our interests in potash are concentrated exclusively in this region.” Moreover, he added that if Uralkali received purchase offers from Belaruskali, it would not consider them.

Amid increasing isolation on the international arena and being left out to Russia’s grace, Minsk has turned to China, which is its traditional major partner for balancing out Russian dependence. Only this month, President Xi Jinping has praised bilateral co-operation between the countries twice in honour of the 30-year anniversary of establishing diplomatic relations.

Belarus in its turn has made several public announcements praising the development of the countries’ bilateral relations, mostly in trade and investments, which is the main focus for the Belarusian regime.

However, the real benefits of Chinese-Belarusian co-operation are questionable, as Belarus has an immense trade deficit with China (totalling nearly $1,223,500,000 in 2020 according to UN COMTRADE). Previous major Chinese investments in Belarus have also turned out to be disappointing for the Belarusian regime. Last year’s worsening relations between Belarus and the West was also a concern for Chinese investors, and no new major loans were given to Belarus from Chinese banks.

In fact, in August last year, China suspended the payment of the remaining $580mn for a loan to the construction of the Nezhinsky mining and processing plant for potash in Belarus, an investment guaranteed by the Belarusian government. The suspension is thought by some to have been made due to the fact that the owner, Russian billionaire Mikhail Gutseriev, and the Belarusian bank holding the loans, Belarusbank, came under Western sanctions. However, some analysts suspect that the credit freeze was a Chinese attempt at exerting leverage over Belarus in order to drive down costs.

During last year’s migrant crisis at the Belarus-Poland border, there were anouncements from both sides of completely shutting down the trade routes between the countries. Moreover, the state Belarusian media recently reported that over 5,000 trucks are waiting to pass from Belarus into Lithuania. Throughout last year, Minsk accused Vilnius of deliberately slowing down the major truck transport routes between the countries for political reasons.

In January this year, Belarusian Ambassador to China Yuri Senko assured Chinese state news agency Global Time that any rumours of the rail link between Belarus and Poland being shut down are false and promised that Belarus would ensure the “smooth transit” of Chinese goods. Moreover, Senko added that “we hope that Belarus will boost bilateral trade with China and use its geographical advantages to become a hub.”

The last 12 months haven’t been calm for the Chinese silk road, as projects are being delayed in the Caucasus, Kazakhstan has experienced political unrest, diplomatic ties have worsened between China and Lithuania and now recently, war is looming between Russia and Ukraine. Since Belarus is a vital transit country for Chinese products to the West, worsening Belarus-EU relationships are not in Beijing’s interest. At a time when such large geopolitical issues as a possible war are developing, Senko’s statement is undoubtedly a reassurance to Chinese investors.

Although, one should question Senko’s statement on making Belarus a hub for the Silk Road trade. With an increasing number of sanctions and halted truck flows between Belarus and the EU, Chinese companies will definitely see fewer possibilities to reach western markets from Belarus.

Furthermore, since Ukraine’s conflict with Russia since 2014 made the Ukraine-Russia border a non-viable alternative to reach the Ukrainian market, Belarus quickly became important for the BRI project due to its proximity to and close trade ties with Ukraine. But lately these trade ties have also become sour due to Belarus’ participation in Russia’s military build-up along Ukraine’s northern, eastern and southern borders. Most recently, Ukraine heavily increased border checks for Belarusian citizens, probably due to heightened fears of Belarusian espionage after the Ukrainian special services claimed it had arrested a spy and provocateur of the Belarusian KGB.

The past two months' heavy praise for bilateral trade between the countries and for Chinese investments from Belarusian state officials could be interpreted as a genuine wish to move closer to China; And if Minsk wishes to balance its dependency on Russia, it will be forced to cater to Chinese investment and trade interests to a much greater extent than before. Now that Belarus’ relations with Lithuania have hit rock bottom, and its relationship with Ukraine is worsening by the hour, increasing rail traffic on Chinas Silk Road in order to also reach India and other large East Asian potash markets seem increasingly more probable.