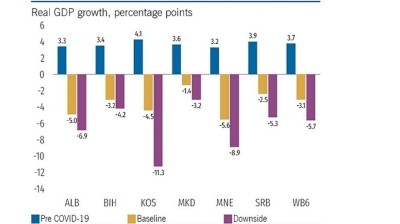 GDP growth in the Western Balkans region could slump by as much as 5.6% this year according to the downside scenario from the World Bank, set out in the spring edition of its Western Balkans Regional Economic Report released on April 29.

Under the baseline scenario from the World Bank, Europe will be able to lift all coronavirus (COVID-19)-related restrictions by mid-2020, allowing economic activity to start recovering in the second half of the year, which would put the six countries of the region on track for a more modest average contraction of 3%. However, none of the Western Balkan states would escape recession under either scenario.

Meanwhile the downside scenario assumes the outbreak could drag on, only allowing containment measures to be lifted at end of August, with a recovery of economic activity only in the final quarter of this year.

"The Western Balkans region is expected to enter a recession in 2020, with all six countries forecast to experience negative growth as they continue to grapple with the economic impacts of the COVID-19 pandemic," the World Bank said.

“The magnitude of the recession depends on the duration of the pandemic in Europe. While the economic impact of the ongoing pandemic in the region is difficult to forecast, there is little doubt that this pandemic is wreaking havoc on lives around the region - taxing health care systems, paralysing economic activity, and undermining the wellbeing of people,” said Linda Van Gelder, World Bank country director for the Western Balkans.

However, she added on a more positive note: “Over the medium-term, growth is expected to rebound strongly in the region, as economic activity gradually returns to normal, but this also depends on the length and intensity of the current crisis, as well as what steps policymakers take to address this pandemic.”

Kosovo is seen as the worst affected country under the downside scenario, with a steep contraction of 11.3%, though its economy would take a considerably smaller hit of 4.5% under the baseline scenario. This is a sharp reversal of the country’s 4.1% pre-COVID-19 growth — the highest in the region.

Montenegro’s economy would be the worst hit under the baseline scenario, as it is forecast to contract by at least 5.6%.

Montenegro’s tourism sector is seen posting an acute contraction in the second quarter of 2020 but moderating in the following months. The annual contraction of the sector, which is one of the main economic drivers, is seen at 34%.

If the coronavirus-related restrictions last longer, Montenegro’s economy will contract by 8.9% in 2020.

“In both scenarios, economic activity is further undermined through other channels and second-round effects. It is also assumed that given the country’s lack of fiscal buffers, such policy responses as higher health and social transfers will be mostly financed by reducing other spending,” the World Bank noted.

Over the medium term, Montenegro should make an effort to make its economy more resilient to shocks by addressing its internal and external imbalances and boosting productivity growth, according to the development bank.

Meanwhile, the World Bank said it expects Albania’s economy to contract by between 5% and 6.9% this year due to the coronavirus crisis.

It is expected that both consumer and investor confidence will be restored and private consumption and investments will rise. The recovery in investment and activity in vital sectors like services, tourism, construction, and energy, will support job creation, the World Bank said.

The worst hit sectors of Serbia’s economy were transport and tourism. The transport sector has lost €110mn since the start of the crisis, while and tourist arrivals and bookings have declined sharply.

“Should the pandemic be prolonged beyond Q3, the impact on the economy would be even more dramatic. The result would be a deeper recession and more pronounced financial pressures, both fiscal and external,” the World Bank noted.

It added that in this case investors would become more risk-averse, which would push up the cost of borrowing and put additional pressure on both fiscal and external accounts.

Serbia needs to address longstanding structural problems in order to accelerate the economic recovery from the current crisis, including management of state-owned enterprises and proper prioritisation of public investment, the development bank said.

The World Bank expects that Bosnia will see annual GDP growth contracting by between 3.2% and 4.2%.

“Q1 is expected to be slightly positive, followed by a steep decline in Q2 and a slightly negative Q3 as economic activity starts to recover. This scenario depends on the length of the pandemic and the magnitude of the state programs necessary to stabilise the economy,” the World Bank noted.

According to the World Bank, the coronavirus restrictions will affect almost every sector of Bosnia’s economy, which is small and open with foreign trade being 83% of GDP.

Bosnia is also expected to borrow more than usual to fund its increased financing needs, but debt is expected to remain sustainable.

“The fiscal deficit should widen to 3.7% of GDP this year compared to last year. Compared to the agreed global fiscal framework the expected fall is from a 1.2% surplus to a 3.7% deficit because of higher spending on health and social and economic support, and lower revenues,” the World Bank noted.

“The unfolding economic crisis, together with the challenging political environment, will make it difficult to carry out the new socioeconomic program, especially in such areas as infrastructure, energy, and transport, which could further affect growth,” said the report.

It added that during and after the unfolding crisis, a major challenge for Bosnia would be to address unemployment and minimise layoffs in the private sector.

The World Bank expects North Macedonia to post a GDP contraction of 1.4-3.2% this year as a result of the economic impact of coronavirus crisis.

"The recession in North Macedonia, like all the countries in the Western Balkans, will be driven by a significant drop in both domestic and foreign demand during the pandemic," according to the report.

Manufacturing, along with, tourism, trade, and real estate are the worst affected, where the contraction is seen at 11.5% in the second quarter. Remittances are also projected to decline, as diaspora workers lose their jobs in destination country or are left with lower income.

Famous ex-defence reporter arrested, accused of treason
2 hours ago
Violent clashes with police at thousands-strong anti-lockdown protest in Belgrade
10 hours ago
Belarus presidential election to have no outside observers, opposition may united by a single candidate
18 hours ago
US intelligence memo admits there is “no evidence” of Russian payment of bounties to Afghans for killing US soldiers
22 hours ago
The bubonic plague has swapped its rats for marmots in Mongolia where two cases reported
1 day ago