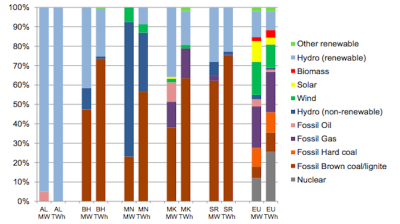 The Western Balkans have to join forces in order to switch to hydropower, renewable energy sources and gas from coal to reduce pollution, a report released by the European Bank for Reconstruction and Development (EBRD) on December 3 said.

Currently, coal-fired power plants account for a significant share of the region’s power generation. Moreover, several new coal-fired plants are to be built, most of them in Bosnia & Herzegovina.

“Current installed electrical capacity in the region is about 18,000 MW, almost evenly divided between hydropower and thermal power plants (TPPs), the latter being mostly coal-fired,” the EBRD noted in the report.

It added that Albania is the sole country that does not rely on coal, with generation coming only from hydropower plants.

On the other hand, in Bosnia half of the installed capacity is based on coal-fired plants, in Serbia its share is two-thirds and in Kosovo it is almost 100%. In Macedonia and Montenegro, coal power is also a significant part of the capacity.

“This is not surprising given the substantial reserves of coal in the region, but it is a major problem because most of it is lignite, which is the most polluting kind of coal,” the report noted.

It added that the amount of carbon that is emitted into the atmosphere, adjusted for the size of the economy, is up to three times the EU average.

“Among the 10 most polluting coal power plants in Europe, seven are from the Western Balkans, including Serbia's Kolubara, Kostolac B and Nikola Tesla A, FYR Macedonia's Bitola, and Kosovo's A and B,” the EBRD said in the report.

It added that the region has an opportunity to move decisively towards a lower carbon route, and significantly increase the use of renewable energy sources. The region could further develop its hydropower potential, but it is not reliable enough to guarantee the countries meet their annual power generation needs.

“Perhaps the most promising opportunity lying ahead is regarding other renewable energy sources, such as wind, solar, and sustainable biomass. Their technology related costs have come down dramatically and they can now be present as an important low cost alternative to more traditional sources of energy,” the EBRD said.

At the same time, the region should increase its focus on interconnections and regional market integration, which is vital for long-term sustainability. The countries in the region have historically good power interconnections, but they are not utilised well enough, reflecting a mixture of regulatory barriers and energy security concerns.

The region should also focus more on using natural gas to cut its carbon emissions.

“The construction of the Trans-Adriatic Pipeline (TAP), which travels through the region and brings in around 10 bcm of gas from Azerbaijan via the Trans-Anatolian Natural Gas (TANAP) pipeline, Greece and Albania and across the Adriatic Sea to Italy, as well as a number of cross-country gas interconnectors that are currently being explored, may open options for a coal-to-gas switch,” the report noted.

It added that a mixture of all renewable energy options could help the Western Balkans cut its carbon emissions, while delivering secure and sustainable energy at a lower cost.

Croatia to be among countries worst hit by tourism collapse this year, says UNCTAD
22 hours ago
Russians, Serbians, Turks the biggest property buyers in Montenegro
1 day ago
Polish PMI advances but remains below 50 points as restrictions lifted
1 day ago
Czech PMI slightly up in June but still under 50-point threshold
2 days ago
Russian corporate profits recovering, but still down by half on 2019 in April
3 days ago