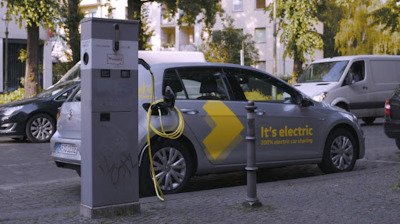 WeShare, Volkswagen's all-electric car-sharing service, will launch in both Budapest and Prague this year, local media reported on February 4.

WeShare launched in Berlin last June and will expand to Hamburg, Prague, Paris and Madrid this spring. Budapest, Munich, and Milan will follow. The company plans to put 8,400 EV cars in the seven cities. In Prague and Budapest, WeShare will cooperate with Skoda.

To achieve a breakthrough in the spread of car-sharing services, host cities need to cooperate said WeShare CEO. One of the biggest challenges is the lack of charging infrastructure

The number of car-sharing services in Budapest will grow to four, as three companies MOL Limo, GreenGo and Drive Now are present.

GreenGo is the first company to introduce a car-sharing platform made up entirely of environmentally-friendly electric vehicles in Budapest in November 2018. It's fleet grew from 45 to 300 electric cars.

The company has solidified its operations in Budapest and is ready to expand across Central and Eastern Europe starting with Prague.

MOL Limo's fleet has grown to 450 vehicles since its launch at the end of 2018, including 300 petrol and 100 electric Volkswagen up! models and 50 next-generation Mercedes Class A models. MOL plans to expand the area where service is currently available to the borders of the capital by 2020 and to increase the number of electric cars in its fleet.

Budapest was the first city in the Central and Eastern European region, where DriveNow launched its service in April 2019. The German company launched the service with  240 cars, including 40 electric BMW i3s. Rental fees are charged by the minute with the option of daily and three-, six,- and nine-hour passes.