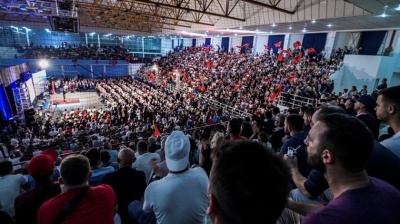 A Vetevendosje rally ahead of Sunday's snap general election.
By bne IntelliNews October 1, 2019

The upcoming snap general election in Kosovo on October 6 is considered to be one of the most uncertain elections since the country declared independence from Serbia in 2008, Slovenia-based think tank IFIMES said in a comment.

The think tank forecasts that the main race will be between two opposition parties, the Democratic League of Kosovo (LDK) and Vetevendosje (Self-Determination), as there has been a strong downward trend in the popularity of the Democratic Party of Kosovo (PDK) that has dominated Kosovo’s political life for years.

Among the three main contenders, opinion polls put the LDK and Vetevendosje neck and neck, with the PDK slipping behind, IFIMES commented on September 30.

Outgoing Prime Minister Ramush Haradinaj’s Alliance for the Future of Kosovo (AAK) is seen as the fourth competitor. However, his influence diminished after he imposed 100% tariffs on imports of Serbian and Bosnian products in violation of the CEFTA agreement. The tariffs have caused relations with Serbia to deteriorate further and reportedly resulted in price rises for some consumer goods within Kosovo.

Most undecided voters also think that current ruling coalition of the PDK, AAK, New Kosovo Alliance (AKR) and Nisma should be punished for what is seen as their unprincipled coalition and their connections with crime, corruption, nepotism, intimidation, threats, war crimes, liquidations and extortions.

The snap vote was announced after Haradinaj resigned in July to appear for questioning at the Hague-based court investigating war crimes against Serbs during the Kosovan war of independence in 1998-1999.

Vetevendosje leader Albin Kurti is seen as the favourite candidate for prime minister by some margin, followed by Vjosa Osmani from the LDK, Kadri Veseli from the PDK, Haradinaj and Fatmir Limaj from Nisma.

IFIMES analysts believe that Kosovo needs a new political leadership which is not burdened with past encumbrances.

"Especially the young generation has recognised refreshment in the political scene through political parties that have not yet participated in the Kosovo government, such as Vetevendosje and its leader Albin Kurti," the report said.

Voters will elect 120 members of the parliament, of which 20 seats are reserved for representatives of minority communities including 10 seats for the ethnic Serbs.

A total of 1.937mn voters in 38 municipalities have been registered in Kosovo where the population totals 1.780mn.

Kosovo is one of the countries in the region, along with North Macedonia, that has problems with the electoral roll, having more voters than inhabitants in the country.

Kosovan citizens in the diaspora have the right to vote until October 5. 20 political parties, four coalitions and one independent candidate will be running in the election.

The previous general elections were held on June 11, 2017. The current ruling coalition took the largest share of the vote, but Vetevendosje is the largest party represented in the current parliament.