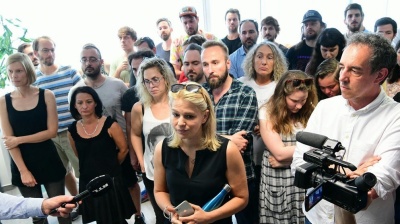 A sad day for Hungary's media history. Journalists of Index resign fearing the loss of independence from government control.
By Tamas Szilagyi in Budapest July 27, 2020

Around 80 people submitted their resignations from independent news website Index.hu on July 24 after the firing of the editor-in-chief the previous day.

The move is unprecedented in Hungary's media history. The collapse of the country's leading online news site further narrows the number of free media outlets in Hungary where the landscape is dominated by Prime Minister Viktor Orban's allies.

On Friday a rally was organised by opposition parties in support of media freedom. Several thousand people walked from the headquarters of Index to the prime minister’s residence in the Castle District.

Index, with 1.8mn unique daily visitors, was Hungary's fifth-largest website and the number one in the news category. Since its foundation in 1999, it has vigorously pursued an independent stance. It was critical of both the right and left wing. Its journalists have received numerous awards over the last 20 years. To its credit, many high ranking politicians from the ruling conservative-nationalist Fidesz also openly admitted that they were avid readers of the news site.

From 2017 the Foundation for Hungarian Progress became the sole owner of the website headed by Laszlo Bodolai, who for a long time worked as a lawyer for the media company. Journalists held the view that this ownership structure would be a guarantee of independence.

The publishing and advertising rights were owned previously by Zoltan Speder. The former chairman of FHB, Hungary’s second-largest listed bank before 2018, Speder has fallen out of favour with the prime minister. Around that time he was forced to sell his stakes in the company, including the sales house Indamedia, to people close to the government.

This was the first warning sign in retrospect, local media wrote, as control over the funding of the portal was transferred to pro-government businessmen.

Concerns about the outlet’s independence deepened after Miklos Vaszily acquired 50% control of Indamedia during the state of emergency in March. An Orban loyalist, he played an integral part in turning the internet news site, Origo, a competitor to Index and other outlets, taking it from being independent to a pro-government mouthpiece during his career.

In late June Index’ then editor-in-chief Szabolcs Dull came out with a shocking editorial about attempts at outside influence.

"The media outlet is under external pressure that could spell the end of our editorial staff as we know it, and we are not sure that we will be able to keep working this way for long,” he wrote. The website's independence gauge, a graphic used since 2018, was turned from "independent" to "in danger".

This came after a controversial business plan was put forward by consultants of Vaszily on the board that would have outsourced content creation, basically spelling the end of independent journalistic work at Index.

Dull was first ousted from the board and a week later from his post as editor-in-chief.

The official explanation for his dismissal was that he had created unfavourable market conditions by leaking the business plan and saying that the news site’s independence was at stake. The disarray led to a drop in revenue as advertisers stayed away, Bodolai said.

Journalists said the firing of Dull was the red line. On Thursday they called on Bodolai to rehire him, which he refused to do. After that some 80 journalists tendered their resignation on Friday in the absence of Bodolai, who on Facebook said he would not have thought that the entire staff would quit. He lashed out at Dull, saying that in Germany his actions (leaking confidential data) would have led to criminal proceedings.

On Friday morning deputy editor Veronika Munk said in an emotional speech editorial staff had campaigned in vain for the return of Dull, and now mostly felt they had no choice but to give up their jobs. For some, it is the second time in only a few years that they have lost their jobs, after working for other media that Hungary’s government has taken over. It is unknown whether the departing editorial staff can remain united and work together, or whether they will individually join other media outlets, or leave the media.

It seems that leaders of the foundation and pro-government owners of the sales house wanted Dull to leave his post quietly. Local media wrote that he is believed to have been offered a substantial sum of money if he were to resign of his own accord, which he rejected.

"I still think the staff’s worries were reasonable and as editor-in-chief I did what my duty and conscience dictated under the circumstances," Dull told Reuters.

The accounts by journalists on social media and in the local press suggest that it was a question of time when the news site's critical tone would have been quelled by pro-government people.

Local media wrote that recruiting of new staff had begun. Bodolai said there was no need for that as he had received many applications. He is expected to accept the resignation of the staff on Monday.

The end of Hungary's leading news website is a further blow to free media. The number of independent news sites has declined dramatically over the years as allies of Orban bought up hundreds of media outlets with state money.

At present some 500 outlets are under the control of the Central European Press and Media Foundation (KESMA), overseen by people loyal to the government. The cabinet blocked an antitrust investigation of the transfer of media outlets by a handful of Orban's cronies to KESMA, saying the transaction was of national strategic interest.

Hungary's illiberal leader has refused to give interviews to independent media outlets, including Index, since sweeping to power in 2010. Pro-government media including state television repeatedly pursued smear campaigns against opposition politicians and independent media.

During Orban’s tenure, Hungary’s media freedom deteriorated sharply. The country slipped two notches to 89th out of 180 countries in the latest Reporters Without Borders (RSF) World Press Freedom Index published in April. In the previous year, the country's ranking fell by 14 places.

A senior European Commission official expressed concern over the independence of the media outlet earlier this month. "What you are doing, the values you are fighting for, media freedom and pluralism, are essential for democracy," said Vera Jourova, the European Commission's vice president for values and transparency, in a statement published by Index. "You can count on my support."