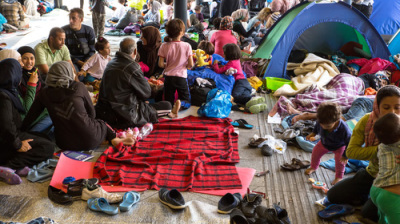 The Visegrad states have reacted furiously to demands that they take in refugees. / CC
By Tim Gosling in Prague May 5, 2016

The Czech Republic, Hungary, Poland and Slovakia all reacted with fury on May 4 as the European Commission proposed reform to EU rules that would open the way for stiff financial penalties to be imposed on countries refusing to accept asylum seekers under Brussels’ migrant quotas plan.

That the Visegrad states blasted the proposals is no surprise. They have rejected Brussels attempts to implement migrant quotas from the very start. Hungary and Slovakia have even launched legal cases against the quota plan, which was forced through by a rare majority vote last year.

However, the unease in Central Europe will have been elevated by the scheme put forward. The two threats that really stoke fear in the capitals of the four are a suspension of the Schengen passport free zone and the loss of the billions of euro in EU funds. The new proposal appears to be an effort to make the latter a reality.

Seeking leverage to force member states to help in the redistribution of migrants, the EU executive announced as expected that it plans to levy penalties of €250,000 per refugee per year on any country refusing to take its quota. The money docked from member states refusing to take in their quotas would be handed to frontline states such as Greece and Italy to help them deal with the numbers arriving.

The plan agreed last year to redistribute 160,000 migrants around the continent has met only a tiny fraction of its target, with Visegrad states taking no more than a handful of Christian refugees from war torn spots such as Syria, Iraq and Afghanistan. They have consistently stressed they will not accept quotas, claiming immigration is a sovereign issue.

Poland’s previous centre-right government agreed last year to accept 7,000 asylum seekers, but the new PiS administration, elected in October, has said several times it will not meet the obligation. Under the new EC proposal, Poland would lose €1.75bn per year if the country fails to take the refugees.

The proposals would retain the basic ‘Dublin’ regulation, requiring refugees to claim asylum in the member state in which they arrive, a lever Hungary announced unilaterally last year it would no longer respect. However, changes would be implemented in a bid to help countries receiving "disproportionate numbers”.

"Regarding the fines proposed by the European Commission, it is blackmailing," Hungarian Foreign Minister Peter Szijjarto said after the Visegrad group met in Prague. "The quota concept is a dead-end street and I would like to ask the Commission not to run into this dead-end street any more."

Officials from Poland’s nationalist government were hardly less outspoken. Polish Foreign Minister Witold Waszczykowski claimed the proposal “sounds like an idea announced during April fools day", while others insisted it flies in the face of EU regulations, without offering details. Slovak officials asserted the plan fails to respect reality and that it would set the bloc's efforts to tackle the migrant crisis back by months.

Even the Czechs, who have been playing up a role as the reasonable Visegrad state over the past year as the rest have become more and more aggressive, did nothing to hide their disdain for Brussels’ new plan.

"I am somewhat unpleasantly surprised that the Commission is returning to play a proposal upon which there is no agreement," Foreign Minister Lubomir Zaoralek said. "It should not propose something that divides us, that will help nothing."

The comments are illustrative of the kind of extreme language that has become common place in Central Europe over the past year or more, as populist governments have jumped on the migrant crisis to help buoy fading support. A growing mood of nationalism has helped them make hay out of the series of crises faced by an EU club that was viewed as a passport to a “Western” style quality of life as they joined just 12 years ago.

The quartet exhibited alarm late last year when EU officials revealed that a vague idea to suspend the wider Schengen zone and reduce it to a handful of Western European countries had been discussed. Earlier suggestions that states unwilling to take on the responsibilities of EU membership during the migrant crisis would have their EU funding docked were dismissed as unrealistic. However, the new proposals appear to threaten just such a move, albeit with the structure of the penalties somewhat altered.

The European Commission also backed on May 4 the extension of internal border checks for six months in five states, including Austria and Germany. The first two are the main route for exports to the Eurozone, which constitute the lion’s share of the exports of the Visegrad states. Any interference in terms of cost or time would hit Central Europe’s economies hard.

The European Commission’s proposals would require support from most member states to go into effect, as well as the European Parliament. Given the rising mood of antagonism towards Brussels and the influx of migrants, that may be a tall order.

The Visegrad states also criticized a plan by the EU to offer visa-free travel to the bloc to Turkish citizens, in return for Ankara’s help in stemming the tide of refugees heading to Europe. The initial deal with Turkey has already helped reduce numbers arriving in EU states such as Greece.

The Mariupol siege is over as the last Azov defenders surrender
16 minutes ago
Kyrgyzstan: Eccentric health minister fights for his job amid claims of corruption and bullying
14 hours ago
Azov commanders have remained behind in the Mariupol steelworks to continue the fight
15 hours ago
Russia hopes Chinese carmakers will help revive Moskvitch brand
16 hours ago
Russia may leave the WTO and WHO. In practice, it never really joined
16 hours ago