Vaclav Klaus - a wrong man for all reasons

The Czech Republic took over the EU helm on January 1, but is the country's president, Vaclav Klaus, really the right man to be involved? Over the next six months, his country is supposed to head up efforts to promote the EU's interests in the world. But looking back at Klaus' historical track record of unambiguous support for Russia, one can't help but wonder exactly whose interests he best serves.

Klaus likes nothing better than to rant about how Brussels, through the vehicle of the Lisbon Treaty, is attempting to usurp the rights and sovereignty of the bloc's individual members by creating a super state with its own constitution and strong centralised executive branch. Klaus' cosmic ego would have the world believe he is the champion of nationalist causes, and so prove his patriotic credentials in the process. But his actions over the past two decades paint a different picture.

The Klaus puzzle begins in 1969. After doing a stint at Cornell University in Ithaca, New York, he willingly returned home to a Czechoslovakia that was being crushed by Soviet tanks. The new pro-Soviet government, established shortly after the spring in 1968, labelled Klaus, "an anti-Socialist malcontent" and purged him from the Economic Institute in 1970. But his fortunes soon reversed and he was given a position in the Czechoslovakian State Bank with permission to travel abroad - an unheard of privilege for true dissidents at the time.

Ever since, Klaus has frequently shown himself to be sympathetic to the Russian cause. As Europe began to freeze early in January after Gazprom turned off the gas taps to Ukraine, Klaus said following a meeting with Russian Ambassador to the Czech Republic Alexei Fedotov on January 7 that: "this is a commercial dispute between Russia and Ukraine and should not be politicised."

Ironically, Klaus' Czech Republic was better placed to weather the chilly crisis, as unlike many of its neighbours who are at the mercy of Russia, the country can buy gas from Norway. But it was Klaus that vehemently opposed this deal between March and April 1997, arguing that the Norwegian agreement was economically unviable.

More recently, Klaus pointed out that nuclear energy could be a solution in reducing dependency on Russian gas during a joint press conference with Polish President Lech Kaczynski in January. What Klaus neglected to point out was that much of the Czech Republic's nuclear energy industry, including reactor builder Skoda JS, is owned by the Russian state and Russia has a long-term contracts to supply Czech utility company CEZ with uranium for the Temelin nuclear plant.

Georgia not on his mind

Indeed, in nearly every dispute between Russia and the EU, Klaus has sided with the Kremlin. When the EU criticized Russia last August after Russia's military swept into North Ossetia and bombed pro-western Georgia, Klaus overtly dismissed Georgia and refused to follow the West's line.

The Russians clearly appreciate their outspoken ally in Europe. Russian Ambassador Fedotov presented Klaus with the prestigious Pushkin Medal in December 2007 on behalf of the then-Russian President Vladimir Putin, for his role in, "helping to spread the Russian language and culture." Klaus said the medal was another confirmation of good Czech-Russian relations that are "once again finding a state of normalcy," during his acceptance speech.

Klaus also towed the Kremlin line on Kosovo, refusing to back the international community's recognition of the breakaway province in February 2008. Previously, he opposed the Nato-led bombing campaign of Yugoslavia to stop the alleged genocide during the Kosovo crisis in 1999.

Russian commercial interests too have benefited from Klaus' helping hand. In 1999, Klaus lobbied for the Czech company ZVVZ Milevsko to supply ventilation technology for the Bushehr nuclear facility in Iran which was then being built by Russia's Atomstroyexport, despite intense opposition from the US and UK. When ZVVZ Milevsko was denied the right to export the technology, Klaus called for financial compensation for the company, where his wife Livia was a member of the supervisory board. ZVVZ also has a number of Russians on its board of directors.

However, most unsettling is the consistent allegations of Klaus' ties to Russian organised crime. The Czech weekly Respekt published an article in 2003 claiming Klaus had criminal ties to the Russian mafia, quoting Czech security service (BIS) officials and police investigators. According to the report, Klaus was linked to Alexander Rebyonok, a Russian-born, Karlovy Vary-based businessman, who moved to Czechoslovakia in the 1970s and supervised Soviet uranium mining operations in the Karlovy Vary region. Following the collapse of communism in 1989, Rebyonok went into the private sector and currently runs several companies including the Imperial Hotel in Karlovy Vary, where Klaus and his wife Livia are frequent guests. BIS officers repeatedly warned the couple that the hotel is a hornet's nest of Russian gangsters and intelligence officers.

Klaus' relationship with the Czech security service has always been uneasy. Two former BIS directors complained in an interview with bne that they warned Klaus on several occasions of the wave of Russian organised crime spreading through the Czech Republic during the mid-1990s when he was prime minister. "Klaus became hysterical, saying there was no such problem and threatened to disband the service because he considered it to be a waste of taxpayer's money," two BIS officers who didn't want to be named told bne.

The president's ties to Russian organised crime go back to the early 1990s. Klaus's ODS party failed to tax cooking oil imported en masse into the Czech Republic from Hungary and sold at pumps as diesel fuel. The entire scam made billions of dollars and was allegedly organised by Ukrainian/Israeli gangster Semen Mogilevich. From his base in Budapest, Mogilevich ran the scam over cooking oil, which was sold in Hungary, Slovakia, Poland and the Czech Republic with the full knowledge of the respective national governments.

Known as "the Brainy Don," Mogilevich is one of the most famous crime figures in Eastern Europe and has also been connected to the controversial Ukrainian gas trading company RosUkrEnergo. Mogilevich has been on the FBI's most wanted list for years, wanted for alleged money laundering, arms, drugs and human trafficking, and is currently living in Russia.

Czech investigative journalists, BIS officials and police investigators have claimed that Klaus' ODS funnelled its cut of the scam to accounts in Switzerland and used the monies to fund re-election campaigns in 1996. Evidence of this surfaced in 1997 when the ODS had considerable problems accounting for anonymous donors contributing large sums of money to their 1996 election campaign from Switzerland. At the time, the Czech press identified at least one Swiss account held by Klaus that held some $5m.

Send comments to The Editor 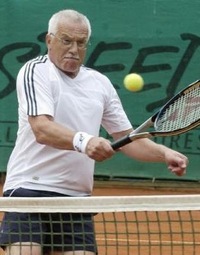