Uzbekistan’s bourse is open for business 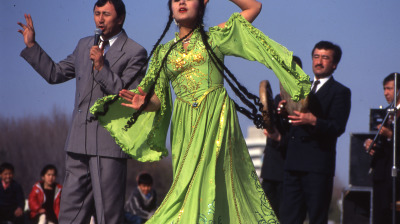 These are busy times for the Tashkent Stock Exchange. Foreign delegations visit almost daily, not only from Korea, which bought a stake, but also from Kazakhstan, Russia, Japan and China. Europeans have been slower to react to the opening up of the country and few European faces are seen on the streets of Tashkent at the moment, but we are welcomed warmly.

TSE was founded in 1994, a few years after gaining independence, but lay moribund ever since. In the tightly controlled republic of former president Islam Karimov, who ruled the republic since its independence in 1991, there was little private enterprise outside of the country’s legendary bazaars and the few stocks and bonds issued were window dressing at best.

Things have changed dramatically following Karimov’s death last year. The economy has enjoying a revival since president Shavkat Mirziyoyev took over and started opening the country up in 2016. One of the goals has been to reduce the the state presence in the economy and that is where the stock market comes in.

Still in its infancy, the total market cap of all traded stocks on the TSE is only $1.6bn. In the first nine months of 2018, 113 joint-stock companies (JSC’s) were traded vs. 93 a year earlier. The total turnover increased an much more impressive 5-fold, but the volumes are still tiny and investors mainly local.

The most actively traded stocks are commercial banks that make up three quarters (75%) of total turnover, with only two banks -- Turkiston PJSCB and Kapitalbank,JSCB – accounting for a third (34%) of the entire turnover of the exchange.

But these exotic markets hold an appeal for investors as when they start to move the returns can run to four digits. Moreover, Uzbekistan’s potential partners have an interested in seeing, what is Central Asia’s most populous country flourish and investing into its financial infrastructure is one of the ways they can do well by doing good. The Korean Stock Exchange acquired a 25% -1 share interest in TSE in 2016, which is itself 50% is state-owned and 25% held by commercial banks. Uzbekistan has a long and fruitful relationship with Korea ever since Karimov travelled there in the 1990s and persuaded the Daewoo automotive to set up a huge car plant in the country.

For the less liquid traded companies, stockbrokers sometimes have to be creative to fulfil buy orders for their clients. Reminiscent of Russia in the 1990’s, they might go to companies to buy share certificates off employees at nominal prices, who received them in earlier privatisations during the transition period just after independence, or use middlemen. Buying up privatisation vouchers proved to be a gold mine for Russian investors quick enough to organise it and in Uzbekistan too, it is proving to be a very profitable business for the brokers.

At the TSE, management says there is an IPO pipeline of 50 companies for the next two years, and in the first quarter of 2019 a list with names will be produced. It says the IPO in April 2018 of Quarts, a glass producer, was a success. It was presented as a “people’s IPO” (3,300 investors took part) and can form a blueprint of placements to come. But brokers disagree: the people IPO meant that each individual could only buy 0.05% ($800) of total shares and the issue ended up being only 53% subscribed with a very fragmented shareholder base. Hardly a successful exercise.

Other companies in the IPO pipeline are mainly telecom companies, food processors, non-core parts of oil & gas companies that the Uzbek state wants off their books. Amongst the most attractive of these assets that will go under the gavel is the country’s national carrier, Uzbekistan Airways. Banks can be privatised as well except when they are deemed strategic. But the natural resources sector, that includes the state-owned oil and gas producer Uzbekneftegaz, as well as gold and mineral mines, are all off limits for the meantime.

At a later stage, IPO’s in London or Asia are possible, the executives at the TSE told us, but it seems obvious that this is not on the immediate horizon as “a lot needs to be learned about the process,” the TSE team told us.

On the bond side, the government is planning to issue its first Eurobond in 2019. The initial target amount was $200-300m, but to get the attention from a larger group of international investors, about $1bn has been rumoured.  Much smaller Tajikistan had its own debut $500m international bond debut in September 2017, which was oversubscribed. With investors awareness that the much larger Uzbekistan could become a very attractive growth story – it is the third biggest country by headcount in the eastern block after Russia and Poland -- it is not difficult to imagine the issue would be a similar success.

The country needs an international sovereign credit rating first though, which is expected for early 2019. There have been delays in this process but given the country’s inexperience with capital markets this can’t come as a complete surprise. In any case, the issuance of an international bond only two years ago would be completely unthinkable.

The Ministry of Finance admits that capital markets do not yet work in an efficient way. The government is cautious and realises a privatised company might shed workers in an effort to become more productive, increasing unemployment and, potentially, social unrest. But it also aware that to attract the necessary investments there needs to be a smoothly working capital market.

One of the biggest hurdles to achieve this are the capital controls that despite many other reforms in this sector, are still in place. The byzantine currency controls were introduced by Karimov in 1996 when he got the foreign exchange bill for allowing easy trade across the board. In those days Uzbekistan’s only significant export was cotton, from which it earned about $3bn a year in foreign exchange. With imports running at a $1bn a year, the government was afraid of running out of dollars and so simply took complete control of the exchange mechanism. The move killed off foreign investors interest overnight.

These controls are being eased now but portfolio investors still need approval from the Central Bank to repatriate money.  Until this is solved the country cannot expect any flow of portfolio investment into the country. The Finance Ministry says changing this has to come from the top and will be a slow process. According to the Central Bank the issue will be submitted to the government and parliament by the end of 2019. Until then, no new money will flow into the system.

Many low hanging fruit changes in the reform process in the country are largely carried out, but for measures such as abolishing of capital control, more time and determination is needed.

Mark van Loon is a former investment banker with interests across the former Soviet Union.