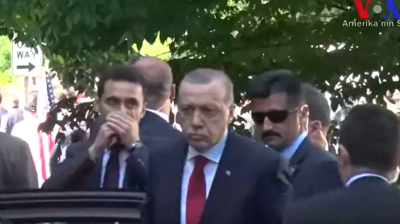 A VoA video captured the moment Erdogan exits his car outside the Turkish ambassador's residence in Washington while the melee continues behind him. / bne IntelliNews
By bne IntelIiNews October 31, 2022

The US Supreme Court on October 31 rejected Turkey's application to shut down lawsuits in US courts stemming from a violent brawl that took place outside the Turkish ambassador's residence in Washington as Turkish President Recep Tayyip Erdogan arrived following White House talks with then US president Donald Trump, VoA reported.

After arriving in a car at the residence on May 16, 2017, Erdogan remained in the vehicle while an initial skirmish between his security detail and protesters took place. The lawsuits reportedly claim that he ordered a second, more violent attack. Turkey denies that he did any such thing.

The Supreme Court justices, said VoA, did not comment in turning away Turkey's arguments that American law shields foreign countries from most lawsuits. Lower courts previously ruled that those protections did not extend to the violent clash of five years ago.

The lawsuits also describe claims from the protesters that they were “brutally punched and kicked, cursed at and greeted with slurs and throat-slashing gestures. One woman slipped in and out of consciousness and has suffered seizures, and others reported post-traumatic stress, depression, concussions and nightmares, according to the complaints,” VoA reported.

The high court had put off a decision about whether to intervene with the lawsuits for months, asking for the Biden administration's views on the legal issues presented.

Turkey can be sued in the given circumstances, the Justice Department concluded in its eventual high court filing, determining that lower courts were correct to find that the US Nato ally does not have legal immunity.

Lawyers for the Turkish government told the court that Erdogan's security detail were entitled to discretion in using physical force when protecting Turkey’s head of state in a potentially dangerous situation.

Some protesters, the lawyers claimed, were "supporters of a U.S.-designated foreign terrorist organization that poses a genuine national security threat to Turkey."

Following the altercation, caught on camera, criminal charges were filed against some of Erdogan's security officers and civilian supporters. Two pleaded guilty. Most other charges were dropped.