Blinken says China and Russia are problems to be addressed 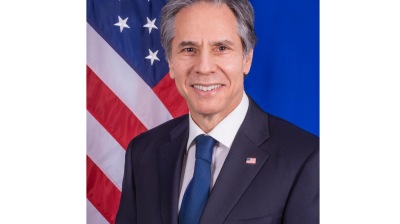 US Secretary of State Antony Blinken gave his first major foreign policy speech, where he highlighted Russia and especially China as problems. / Wikipedia
By Ben Aris in Berlin March 16, 2021

US Secretary of State Antony Blinken was appointed in February and gave his first major foreign policy speech on March 3, where he laid out his vision for US foreign policy and named China and Russia as problems to be addressed.

US President Joe Biden expounded on what he called “interim strategic guidance” on national security and foreign policy the same day.

Blinken's speech comes a week after the UK also updated its foreign policy. The atmosphere has definitely cooled as London named Russia as the “number one threat,” whereas it graded China a rank lower as a “commercial rival.”

Blinken promised that the US will engage more with the rest of the world, a change in direction from former US president Donald Trump’s “America First” policy.

“American leadership and engagement matter. We’re hearing this now from our friends. They’re glad we’re back. Whether we like it or not, the world does not organise itself. When the US pulls back, one of two things is likely to happen: either another country tries to take our place, but not in a way that advances our interests and values; or, maybe just as bad, no one steps up, and then we get chaos and all the dangers it creates. Either way, that’s not good for America,” Blinken said.

Blinken also suggested that Washington would make more effort to co-ordinate with its allies, because “we need countries to co-operate, now more than ever.”

“Not a single global challenge that affects your lives can be met by any one nation acting alone – not even one as powerful as the United States. And there is no wall high enough or strong enough to hold back the changes transforming our world,” said Blinken.

Having said that, Blinken highlighted that part of this co-operation included ensuring that the US has the “world’s most powerful armed forces.”

“Our ability to be effective diplomats depends in no small measure on the strength of our military,” said Blinken, who went on to single out the threat from hackers and the need to “secure our leadership in technology” as a key national security goal.

The US top foreign policy goal is to end the coronavirus (COVID-19) pandemic, Blinken said, who also worked for the Obama administration.

“The pandemic has defined lives – our lives – for more than a year. To beat it back, we need governments, scientists, businesses and communities around the world working together. None of us will be fully safe until the majority of the world is immune, because as long as the virus is replicating, it could mutate into new strains that find their way back to America,” Blinken said.

Next up is to repair the damage from the coronacrisis to the US economy. On this front things are already going well, as the US economy has already started to bounce back and is expected to outperform this year.

On economic policy Blinken suggested that the Democracts would move away from the Republican's focus on cutting taxes for the wealthy and boosting economic and stock market growth, and focus more on creating good jobs for the average man. And within these remarks he took a veiled swipe at China.

“Our approach now will be different. We will fight for every American job and for the rights, protections and interests of all American workers. We will use every tool to stop countries from stealing our intellectual property or manipulating their currencies to get an unfair advantage,” Blinken said in a not so thinly veiled reference to accusations that have been levelled against China. “We will fight corruption, which stacks the deck against us.”

The third point Blinken highlighted was to “renew democracy,” as he explicitly layed out Washington’s policies towards China and Russia, explicitly calling out the two countries as “adversaries and competitors like Russia and China.”

Here Blinken emphasised that the battle against Russia and China was not only to be fought over the international negotiating table, but also at home on US soil, where he highlighted the “rampant” disinformation and the increasingly polarised nature of US domestic politics.

Blinken set out a largely ideological basis for US foreign policy that is grounded on “defending democracy around the world for years to come.” It is an implicit return to a form of the Monroe doctrine – any intervention in US domestic politics by a foreign power was seen as a hostile act against the US, as it strove to reduce and reject European powers from the Americas.

“Why does that matter? Because strong democracies are more stable, more open, better partners to us, more committed to human rights, less prone to conflict, and more dependable markets for our goods and services. When democracies are weak, governments can’t deliver for their people or a country becomes so polarised that it’s hard for anything to get done, they become more vulnerable to extremist movements from the inside and to interference from the outside. And they become less reliable partners to the United States. None of that is in our national interest,” said Blinken. “So the question isn’t if we will support democracy around the world, but how.”

On a lighter note, Blinken promised that this promotion of democracy would not be carried out by force, despite his promise to build up the military.

“But we will not promote democracy through costly military interventions or by attempting to overthrow authoritarian regimes by force. We have tried these tactics in the past. However well intentioned, they haven’t worked,” Blinken said.

EU wants a lighter touch for relations with Russia

The US-UK hard line towards Russia will be tempered by the EU's much softer stance, as Brussels and especially Berlin look for a more accommodating relation with Russia.

Germany is heavily invested into Russia with some ten-times more companies than any of its EU peers operating in the country and that invested a record €3bn last year. In addition, Europe remains heavily reliant on Russian energy and raw material imports, whereas it is a major export market for machines and equipment. German heavy engineering firm Siemens, for example, has a virtual monopoly over the provision of gas turbines and high-speed trains to Russia.

While Blinken espoused a tough stance based on human rights, Biden has also made it clear that he wants to repair trans-Atlantic relations with Europe, following the Trump years, and has already been co-ordinating US sanctions policy in consultation with Brussels. That is likely to temper Washington’s actions in its showdown with Russia.

For its part, the Kremlin has taken a very strong stance after Russian Foreign Minister Sergei Lavrov laid out new rules of the game in a speech in February, where he said Russia would no longer tolerate damaging sanctions nor interference into what it considers domestic affairs. The wily old foreign minister went as far as to threaten to break off diplomatic relations if the West chose to ignore Moscow’s demands.

Blinken, a francophone who was partly educated in Paris, made it explicit that renewing the US relations with its allies was a top priority (although it came fifth in his list of key policy goals).

“We will revitalise our ties with our allies and partners. Our alliances are what the military calls force multipliers. They’re our unique asset. We get so much more done with them than we could without them. So we’re making a big push right now to reconnect with our friends and allies, and to reinvent partnerships that were built years ago so they’re suited to today’s and tomorrow’s challenges,” Blinken said. “That includes countries in Europe and Asia that have been our closest friends for decades, as well as old and new partners in Africa, the Middle East and Latin America.”

China upgraded to problem number one

China has been promoted ahead of Russia as the main rival to the US hegemony and Blinken devoted more space to talking about relations with China than those with Russia.

“Several countries present us with serious challenges, including Russia, Iran, North Korea. And there are serious crises we have to deal with, including in Yemen, Ethiopia and Burma,” Blinken said. “But the challenge posed by China is different: China is the only country with the economic, diplomatic, military and technological power to seriously challenge the stable and open international system – all the rules, values and relationships that make the world work the way we want it to, because it ultimately serves the interests and reflects the values of the American people.”

“Our relationship with China will be competitive when it should be, collaborative when it can be, and adversarial when it must be. The common denominator is the need to engage China from a position of strength,” Blinken added.