US, Europe on collision course as Trump 'hard exits' from Iran nuclear deal 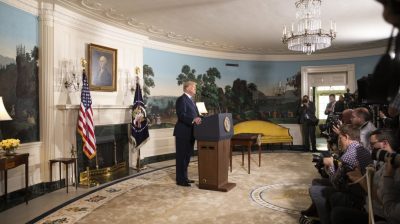 Donald Trump on May 8 announced that he was pulling the US out of the Iran nuclear deal and reimposing the heaviest sanctions on Tehran, declaring: “When I make promises I keep them.” Dismayed by the American president’s decision to take the ‘nuclear option’ in abandoning the multilateral accord, many of Trump’s critics were not slow in replying: “The same cannot now be said for America.”

Whatever the rights and wrongs of the move it leaves Washington and the five other signatories who in late 2015 agreed to the deal with Tehran—the UK, France, Germany, Russia and China—on a collision course with the Trump administration. And, just for starters, Iran’s plans to source $200bn of investment for its oil, gas and petrochemical industries and spend $38bn on Boeing and Airbus aircraft purchases may be doomed.

The US Treasury said economic sanctions would not be reimposed on Iran immediately, but would be brought in subject to 90-day and 180-day wind-down periods. In a statement, it said sanctions would target industries including Iran's oil sector, aircraft exports and precious metals trade, and Iranian government attempts to buy US dollar banknotes.

Following Trump’s announcement, US National Security Advisor and foreign policy hawk John Bolton told reporters that the US Treasury Department would allow up to 180 days for foreign companies that do business with Iran to end their contracts or face sanctions.

But the immediate response from Europe’s Big Three was a joint statement from UK Prime Minister Theresa May, German Chancellor Angela Merkel and French President Emmanuel Macron in which they emphasised their "continuing commitment" to the deal, formally called the Joint Comprehensive Plan of Action (JCPOA). "We encourage Iran to show restraint in response to the decision by the US; Iran must continue to meet its own obligations under the deal, co-operating fully and in a timely manner," they added, while also urging the US not to obstruct Europe's attempt to adhere to the JCPOA.

In his initial response to Trump’s rejection of continued US participation in the JCPOA, Iran’s President Hassan Rouhani—a pragmatic and centrist politician now more exposed to the hardliners in Iran who say he was wrong to ever trust the Americans—did evidence restraint. Even though he said he had “ordered the Atomic Energy Organisation of Iran to be ready to start the enrichment of uranium at industrial levels” he qualified that statement by saying that “we will wait a few weeks and speak with our allies and those committed to JCPOA. All depends on our national interests”.

Beyond fellow JCPOA signatories, Iran is not short of allies in seeking to retain the nuclear deal, with EU foreign policy chief Federica Mogherini also coming down on the Iranians’ side, stating: “The EU is destined to preserve the deal, and we will do whatever it is to keep it.” She added: “Let me conclude with a message to the Iranian citizens and leaders: do not let anyone dismantle this agreement. It is one of the biggest achievements diplomacy has ever delivered. Stay true to your commitments, as we will stay true to ours.”

UN Secretary General Antonio Guterres also weighed in saying he was deeply concerned by the US decision to walk out on the deal. He called on all other parties to fully abide by its commitments.

Obama-era secretary of state John Kerry, who painstakingly helped craft the JCPOA—which removed crippling sanctions on Iran’s oil exports and other vital areas in return for compliance with measures designed to bar its path to the development of a nuclear weapon—said in a statement that Trump’s decision risks "dragging the world back to the brink we faced a few years ago".

Kerry’s statement was followed by one from Trump predecessor Barack Obama, who said:  "Without the JCPOA, the United States could eventually be left with a losing choice between a nuclear-armed Iran or another war in the Middle East.” Noting that the agreement is working—all the signatories except the US have stated Iran is in full compliance with the JCPOA requirements—Obama added that it is a "model for what diplomacy can accomplish—its inspections and verification regime is precisely what the United States should be working to put in place with North Korea. Indeed, at a time when we are all rooting for diplomacy with North Korea to succeed [over its nuclear weapons programme], walking away from the JCPOA risks losing a deal that accomplishes—with Iran—the very outcome that we are pursuing with the North Koreans."

Trump sees Tehran bending to pressure
In coming out against continued US adherence to the JCPOA, Trump said at the White House that it was “a horrible one-sided deal that should never, ever have been made”. He added: “It didn’t bring calm, it didn’t bring peace, and it never will.” During his announcement he also indicated that the pressure brought to bear on Tehran would eventually persuade the Iranians that they would have to strike a new deal. Trump wants a reworked accord to address Iran’s military and political activities in the Middle East and its ballistic missile development programme. He would also reject provisions of the current accord that allow Iran to restart some nuclear development activities in 2025.

Also while announcing the US withdrawal from the JCPOA, Trump referred to claims recently made by Israeli Prime Minister Benjamin Netanyahu that Israel has documents detailing past Iranian work on nuclear weapons development. Presented by Netanyahu during a piece of documentary-style political theatre broadcast live on television from Israel’s military headquarters in Tel Aviv, the allegations quickly ran into scepticism when a former senior official of UN nuclear watchdog International Atomic Energy Agency (IAEA) pointed out that he had already seen at least some of the so-called key evidence 13 years ago and that it was made public in 2011. Trump, however, backed Netanyahu’s claims unreservedly.

Netanyahu calls the JCPOA "cosmetic" and a "historic mistake" and The Times of Israel on May 8 reported Israeli Intelligence Minister Israel Katz as saying: "The Iranians have already proved that they only understand threats and powerful force." However, former head of Israeli intelligence Tamir Pardo disagreed, tweeting that Iran is "fully complying" with the accord.

The JCPOA saw Iran cut its stockpile of low-enriched uranium by 98% to just 300lbs, far below what would be needed to make enough fissile material for a single nuclear bomb. Iran also dismantled around 13,000 of its centrifuges, leaving around 5,000 of its oldest-model machines in place. Tehran, moreover, verifiably ceased all enrichment at its underground facility at Fordow, according to the IAEA.

Karim Sadjadpour, a senior fellow at the Carnegie Endowment for International Peace, said in a tweet late on May 8: “By withdrawing from the JCPOA, Trump hastens the possibility of three disparate but similarly cataclysmic events: an Iranian war, an Iranian bomb, or the implosion of the Iranian regime.