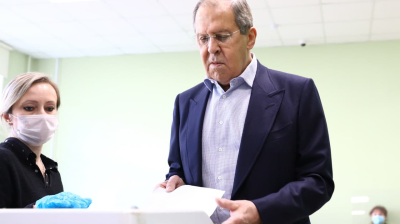 Both diplomats agreed on the need for more humanitarian efforts in Ukraine. / Image: bne IntelliNews.
By Theo Normanton April 26, 2022

Antonio Guterres, Secretary-General of the United Nations, met Russian Foreign Minister Sergei Lavrov in Moscow on Tuesday, 26 April. He urged Russia to negotiate a ceasefire in Ukraine and stressed the need for more humanitarian relief efforts.

Mr Lavrov used the opportunity to accuse Ukraine of allowing its soldiers to “walk around with fascist Nazi symbols and swastikas” and lambasted the UN for failing to take a stance on the Minsk Agreements.

The most significant point on which both diplomats agreed was the need to alleviate the suffering of the civilian population in Ukraine. Russia has agreed to create humanitarian corridors out of the besieged city of Mariupol before, but previous attempts have often come to nought. Now there are estimated to be around 1,000 civilians trapped in the Azovstal Steelworks in the centre of Mariupol, which is under heavy Russia fire.

Mr Guterres announced that the UN could form a new negotiating group with representatives from both sides to negotiate the evacuation of civilians and the delivery of humanitarian aid.

“I have proposed the establishment of a humanitarian contact group bringing together the Russian Federation, Ukraine and the United Nations to look for opportunities for the opening of safe corridors with local cessation of hostilities, and to guarantee that they are actually effective,” said Mr Guterres.

Mr Lavrov was also at pains to stress the notion – first articulated by Vladimir Putin at the 2007 Munich Security Conference – that global power is becoming “multipolar”. This theory suggests that the western-led global order is coming to an end, and that a new, fairer system will replace it. A system in which, it is implied, Russia will have a bigger role.

In the spirit of giving a voice to under-represented governments, Mr Lavrov confirmed that Russia had accredited its first diplomat from the Taliban in Afghanistan. “We would like to move towards a full recognition of the Afghan government,” he added.

Mr Guterres recognised the criticism, saying: “I believe that a stronger representation of developing countries in many areas would be an important reform.”

Despite registering some success in the first round the previous weekend, populists and anti-establishment parties failed in the run-off for the upper house.