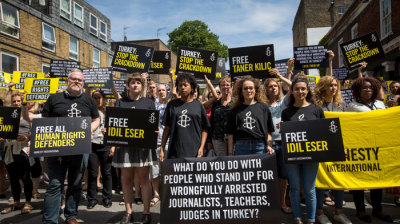 The sweeping purges have even led to the arrest of the chairman of Amnesty International Turkey, Taner Kilic. / Amnesty Canada.
By bne IntelliNews March 20, 2018

The United Nations on March 20 called on Turkey to end its 20-month-old state of emergency, saying it was having a "chilling effect" on Turkish society by demonstrating that any dissent would be punished.

Under the emergency powers regime, introduced after the failure of an attempted military coup in July 2016, President Recep Tayyip Erdogan can rule by decree. Some 160,000 people have been arrested, while approximately the same number of civil servants have been dismissed, during the state of emergency in Turkey, according to the UN human rights office. Mass arrests, torture, interference with the judiciary, arbitrary sackings and other abuses that in some cases have amounted to "collective punishment" have taken place, the office said.

Turkey's foreign ministry responded that the UN report was packed with unfounded allegations. It compared the criticism to the propaganda that is put out by anti-Ankara terrorist groups and said UN officials were ignoring "the severe and multiple terrorist threats" Turkey is facing.

However, the report urged Turkey to "promptly end the state of emergency and restore the normal functioning of institutions and the rule of law".

Zeid Ra'ad al-Hussein, UN High Commissioner for Human Rights, remarked that the numbers of people arrested or dismissed under the state of emergency are "just staggering".

"Teachers, judges and lawyers dismissed or prosecuted; journalists arrested, media outlets shut down and websites blocked—clearly the successive states of emergency declared in Turkey have been used to severely and arbitrarily curtail the human rights of a very large number of people," Zeid said.

Even the chairman of Amnesty International Turkey, Taner Kilic, has been arrested during Turkey’s sweeping purges, with prosecutors accusing him of “membership of a terrorist organisation” in relation to alleged activities relating to coup plotters.

Since the state of emergency crackdown began Turkey has regularly come under fire from MEPs and Eurocrats for abusing basic human rights and sliding towards authoritarian rule. Its hopes of joining the EU in the foreseeable future lie in tatters.

In December, Turkey was for the second consecutive year ranked as the world's worst offender for jailing reporters going about their work. The unwelcome number one spot was outlined in an annual report on press freedom released by the Committee to Protect Journalists (CPJ) watchdog. Amnesty International, meanwhile, in late February warned that human rights violations and the crackdown on freedom of expression were likely to proliferate in Turkey as long as it remains under the state of emergency. Also, on March 7, while cutting Turkey’s credit rating further into junk, Moody’s Investors Service observed that political factors, such as the prolonged state of emergency, were weighing down on the country. However, Turkish officials have given no indication that the ending of the special regime will take place any time soon.

The Turkish government blames the network of Fethullah Gulen, a US-based self-exiled Muslim cleric, for the failed coup, during which 250 people lost their lives. But Gulen has strenuously denied any involvement and has accused Erdogan in columns written for the US media of using the coup attempt as a pretext to undemocratically inflate his powers.

The UN report was based on 104 interviews. It describes the use of torture and ill-treatment in custody. Incidences referred to include severe beatings, sexual assault, electric shocks and waterboarding by police, gendarmerie, military police and security forces.

UN human rights spokeswoman Ravina Shamdasani told a news briefing that victims included at least 50 women detained just before or after having given birth, with some separated from their babies. One woman was shackled by her legs immediately after a miscarriage, she said.

"We have reports that people were detained and ill-treated without charge by anti-terror police units and security forces at places like sports centers and hospitals, as well as detention facilities," she added.

In a related development, the European Court of Human Rights (ECHR) ruled on March 20 that the rights of two prominent Turkish journalists, Ahmet Altan and Sahin Alpay, had been violated during their pre-trial detention for over a year.

Altan was handed a life sentence in February 16 over his alleged links to FETO, an acronym that refers to what the Ankara government calls the “Fetullahist Terrorist Organisation”.

Also on March 20, Turkey charged an American pastor with working to divide the Turkish republic and prompt internal chaos by inciting hatred based on religious and ethnic differences.

Andrew Brunson, imprisoned in Turkey since the 2016 coup attempt, faces up to 35 years in prison for pursuing goals of the wanted cleric Gulen, whom the US has refused to extradite, and the autonomy-seeking Kurdish PKK group.

Brunson is also accused of allegedly acting with a group of military and intelligence personnel against the Erdogan administration and of obtaining classified information in the pursuit of political and military espionage, media outlet Anadolu said, citing the indictment. The pastor denies any wrongdoing.

The Mariupol siege is over as the last Azov defenders surrender
26 minutes ago
Kyrgyzstan: Eccentric health minister fights for his job amid claims of corruption and bullying
14 hours ago
Azov commanders have remained behind in the Mariupol steelworks to continue the fight
15 hours ago
Russia hopes Chinese carmakers will help revive Moskvitch brand
16 hours ago
Russia may leave the WTO and WHO. In practice, it never really joined
16 hours ago