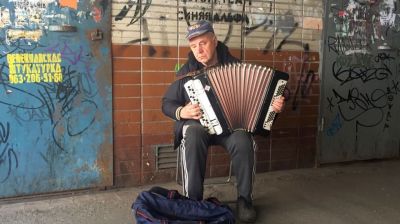 Valentyn Honcharuk, 64, stands dressed in a thin leather hand-me-down jacket from his son. After working 41 years as an engineer-mechanic designing Soviet and Ukrainian factories, he now receives a pension worth less than $80 a month because it isn’t adjusted to inflation – it was worth more than $260 four years earlier when he retired.

On principle, Honcharuk – who augments his pension by working eight daily shifts as a security guard per month – doesn’t accept money from his only child, and proudly declined to meet bne IntelliNews at a café as our guest. He drives a used Chevrolet Aveo – also a gift from his adult son – but relies on the food he grows at his dacha [country cottage] to mitigate expenses.

“When I worked earning $600 per month, I once went to Egypt in 2008, now I can’t even afford to see parts of Ukraine that I’ve always wanted to visit,” he recounts. “I used to like tasting rum or whisky, now I can only afford vodka and I break the law by drinking it with other retirees outdoors in plastic cups.”

Honcharuk says he “gets by…I’m used to living this way, not being able to go out, but it’s shameful and undignified when I see other pensioners collecting recyclables in exchange for money or have to continue working like I do.”

Two thirds of the nation’s 12mn pensioners – themselves roughly a third of the population – receive a minimum monthly pension of $65, barely above the official poverty level. Like Honcharuk, millions of other pensioners can be seen eking a living by selling produce grown at their summer homes, hawking cigarettes, working as nannies etc in Ukraine’s vast underground economy that economists estimate accounts for 40-60% of the nation’s economic output.

To be able to increase pensions, according to an International Monetary Fund (IMF) country report published in April, Ukraine needs to fundamentally overhaul its Soviet-era pension system. Yet, successive governments have avoided raising the retirement age and have failed to encourage businesses and people to contribute more to the pension fund.

The main problem is there are too many pensioners entering the system and too few workers contributing to the pension fund – they are roughly at 1-1 parity, one of the lowest in Europe.

If the system doesn’t get fixed soon, Ukraine’s pro-Western government risks not getting the next $1.9bn tranche from the IMF under the $17.5bn bailout programme agreed in March 2015.

“The debate to reform the pension system has been delayed for too long in Ukraine,” Ron van Rooden, IMF Mission Chief for Ukraine, said in an April 18 opinion column. “But there should also be no doubt that only by meaningful pension reform that reduces the inflow of new pensioners and increases the number of people who contribute to the pension system, it will be possible to create room for paying better pensions that avoid old-age poverty, while keeping the whole system and the budget financially viable for future generations.”

Presidential and parliamentary elections in 2019 make this year the only viable time to pass the politically difficult and unpopular measures.

Parliament should receive a comprehensive reform plan in the “next several weeks”, Social Policy Minister Andriy Reva told RBK Ukraine ahead of the legislature’s spring session, which began on May 16.  On May 17, Ukraine's cabinet approved the plan at its weekly government meeting and sent it to a high level advisory body for review before parliament gets to see it.

The country’s low fertility rate of 1.2 children per woman and an ageing population need to be factored in, coupled with what the United Nations says is a “continuous net outflow of migrants”, an issue that the smartest of policies can’t easily address in the short term. More also needs to be done to encourage people to work longer and to bring the hidden economy out of the shadows .

Statutory retirement currently is one of the lowest in Europe, with men retiring at 60 and women at 58. And with total pension spending estimated at 11% of gross domestic product this year, the system is “financially unsustainable”, van Rooden said in the opinion column.

Only two-fifths of the pension fund is covered by contributors. Cutting the payroll tax from early 40% to 22% only increased the fund’s deficit. Authorities anticipated the lighter tax burden would encourage employers to report the true salaries of workers, but that didn’t happen.

And early retirement for about a dozen occupations, or 1.85mn retirees, adds to the problem, with professionals in health and education accounting for one-third of this group.

“It’s not just that the pension system is unsustainable, given the current demographic trends that can’t be easily reversed by the best of policies and shortcomings of how many qualify for early retirement, it needs to be altered so that the more you pay into it, the more you receive upon retirement,” said Nick Piazza, owner and director of boutique investment bank SP Advisors in Kyiv.

Adjusting the current pay-as-you-go system to establish a tighter link between years of service and the retirement benefit amount, and to embed incentives for both employees and employers is the recommendation of Olena Bilan, chief economist at the Dragon Capital investment bank in Kyiv.

Otherwise, if the system remains the same, Ukraine could see 1.4 beneficiaries to one contributor to the pension fund by 2060 in the worst case scenario, said Grigoriy Ovcharenko, head of asset management at Kyiv-based Investment Capital Ukraine.

Ukraine could save up to 3.5% of GDP in government spending if it gradually raises the retirement age to 65 for men by 2026 and 2031 for women. “Bringing health and education workers under the general retirement regime” could bring additional savings, the IMF report stated.

Prime Minister Volodymyr Groysman has already indicated that he will not raise the retirement age but will increase the service term for pension eligibility, effectively raising the statutory age. He foresees the pension fund reducing its deficit to 2024 to zero.

Deputy Prime Minister Pavlo Rozenko has also publicly stated that “sweeteners” will be added. The minimum pension was increased on May 1 and will rise from December 1, so that by year-end 8mn pensioners will see a 10% bump.

And the finance ministry said it is exploring “buy-in” options for people who want to retire earlier, allowing them to pay their remaining contribution share before doing so.

Until fundamental change happens, it’s not worth introducing other private pension plans to create second pillar systems, according to the IMF.  “[It] would not make much sense if the current system is not fixed first and would be premature given the current level of development of Ukraine’s financial markets and legal frameworks.” van Rooden said.

In the meantime, pensioner Honcharuk is more scared for his offspring than for himself.

“I lived my time, I’ll survive,” he said. “But my children and grandchildren aren’t ready to live like I do when they retire…I’m used to it.”