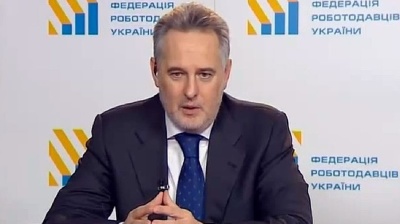 Ukrainian oligarch Dmytro Firtash can stay in Austria while a court considers a defence motion to re-open the case against him, despite the fact that the country's justice minister approved, on July 16, his extradition to the US.

According to the Austria Press Agency, Justice Minister Clemens Jabloner approved the extradition. But a Vienna state court judge ruled it could only take place after the court has decided on the defence motion to re-consider the matter, and court spokeswoman Christina Salzborn said the defence had provided "extremely extensive material".

In June, the Supreme Court of Austria cleared the way for Firtash to be extradited to the US, where he would face corruption charges. The court rejected a complaint filed by Firtash against the 2017 appellate court ruling to permit his extradition to the US, where he is wanted for allegedly bribing Indian officials to secure mining licences.

According to news agency AP, Dieter Boehmdorfer, an Austrian lawyer for Firtash, told Oe1 radio the defence was aiming to prove that Firtash had committed no crime in India and that there was no suspicion against him there. It was also intending to prove "that the US does have a far-reaching political motivation" to secure Firtash, he added.

Firtash has been stuck in Austria, where the US authorities sprang the charges and extradition request. The businessman is suspected of spearheading a conspiracy to pay at least $18mn in bribes to businessmen to mine titanium in India and sell it to a Chicago-based company. Participants in the mining enterprise expected to generate more than $500mn annually from the sale of the valuable metal, which is used in making items from golf clubs to jet engines.

In February 2017, the Land Court of Vienna ordered his release after a fresh detention two days earlier in the Austrian capital on a Spanish arrest warrant, only for him to be immediately taken back into custody in connection with a separate US extradition case. Meanwhile, the July 24 filing was US prosecutors' response to Firtash's motion to dismiss all the charges against him.

Shortly after his initial arrest in Austria in March 2014 at the request of US authorities, Firtash was released from detention after posting bail of €125mn ($140.2mn).

Firtash's lawyers are "disappointed" over the court ruling, they said on June 25. "In any event, nothing has changed regarding Mr. Firtash's innocence and the absence of evidence that he is guilty of any crime," Dan Webb and Lanny Davis said in their common statement, according to Interfax.

"He has never done business in the US, never visited the US, and had no knowledge of any plan to bribe Indian officials about an Indian titanium mine that never happened," his lawyers added. "Indeed, it is remarkable that in the entire indictment, US prosecutors never charged Mr. Firtash – or anyone – with even paying a bribe – a fact largely unreported in US media coverage."

COMMENT: Can Russia pivot its European gas sales to Asia?
Missiles or sabotage: What caused the explosion at the Russian airbase in Crimea?
Population decline to take Emerging Europe back to the early 20th century