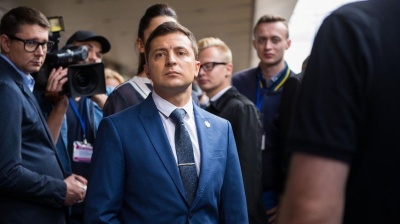 So far Ukrainian comic and presidential candidate Volodymyr Zelenskiy has said almost nothing about what policies he would pursue should he win / wiki
By bne IntelliNews March 11, 2019

Ukrainian comic and presidential candidate Volodymyr Zelenskiy met with representatives of the international media on March 4 and sketched out some of his proposed policies should he win the upcoming Ukrainian presidential elections on March 31.

So far Zelenskiy has said almost nothing about what policies he would pursue should he win, although the few comments he has made have been highly controversial.

The most notorious was his remark that negotiations with Russia are “inevitable” if the undeclared war in the eastern regions of the country is going to end. Ukrainian nationalists were outraged that Zelenskiy could attempt to “appease” the enemy. More than 13,000 have died in the fighting over the last four years.

Another hot button issue is his intentions for PrivatBank that used to belong to Ihor Kolomoisky until bne IntelliNews exposed the wholesale looting of its deposits in a cover story in November 2016 “Privat investigations” that lead to the bank’s collapse and nationalisation a month later.

Some have suggested that Zelenskiy would return the bank to its former owner, who has not paid back a penny of the approximately $5bn looted from the bank – money that had to be replaced with public funds as part of the bank’s rescue.

Indeed, Zelenskiy's relationship with Kolomoisky, Ukraine’s richest man and a ruthless oligarch, remain murky. As bne IntelliNews recently reported, Zelenskiy was implicated in a PrivatBank scam that saw $41mn of Privatbank’s deposits “loaned” to a company owned by Zelenskiy.

In a less controversial position Zelenskiy is middle of the road on the International Monetary Fund (IMF) deal. Opposition leader and a frontrunner in the race Yulia Tymoshenko has campaigned on an extreme anti-IMF platform, whereas incumbent President Petro Poroshenko is campaigning on an extreme pro-IMF platform. The IMF programme has a mixed reaction as while IMF funds have prevented a renewed economic crisis, it has also inflicted a lot of pain on the population in the form of higher utility prices, amongst other things.

Below are the main comments to emerge from the conversation as reported by Ukrainian website the Babel.com.ua.

If in courts it will be proved that funds were withdrawn from PrivatBank, then 100% of them should be returned to the budget of the country.

I really appreciate my freedom, so I have no obligation to the owners of TV channels. The process of quitting [my media company that is the counterparty in various business deals in Russia and abroad] Kvartner 95 group has already begun. Before the parliamentary race I would like to be out of all contracts related to business.

About parliamentary elections due in October

After the presidential race we are preparing for parliamentary elections. Ruslan Stefanchuk, ideologue of the "Servant of the People" party, is globally involved in the drafting of bills. We are developing them now.

We are engaged in a search for specialists. I met [former member of the National Agency for Preventing Corruption] Ruslan Ryaboshapka — an honest guy and a specialist, I would like to see him in our team. In our team there is still Ivan Bakanov, I have been with him since childhood. He is the chief lawyer of Studio Kvarter 95, and Dima Razumkov is a political scientist.

We will continue our relations with the IMF and will do everything we owe. Sasha Danylyuk [the reformist and highly competent former finance minister] is our economic advisor. Today we all have the status of experts.

About Putin, the war and negotiations with Russia

I would like to ask: what is the reason why you came to our land? This is just a discussion. I want the subject answered. I would like to ensure that their [the Russian authorities'] conditions are fixed on official paper. It makes no sense to ask whether they are their troops. We know that they are here, although [Russian President Vladimir Putin] said they are not. As soon as we have an official document, I think we will be a little closer to resolving the issue.

If there is any chance to end the war, we must do everything to stop our people from dying. You need to stop shooting. The Minsk agreements do not work. It is necessary to expand the negotiating table, to involve the UK and the US.

Of course, you need to talk with representatives of the Russian Federation. As it is — it is worth discussing further. I like the Kurt Volker [United States special representative for Ukraine] line: a line of separation, the peacekeeping mission, and then protect the small villages and go to Lugansk and Donetsk.

The information war must be won. There should be a Russian-language channel at European level with offices in Europe and the US.

About Kolomoisky and his TV station "1 + 1" that backs Zelenskiy

According to statistics, people do not believe that I am a puppet of Kolomoisky. People really feel me, and they have known me for more than one day. They will elect a president, not Kolomoisky.

With regard to the protection [reporters noticed that Zelenskiy’s bodyguard is one of Kolomoisky’s], we turned to the channel "1 + 1", they gave us a company that provided the guards. We took this company and paid it. I am not friends with these people, and I have never been close to them.

Why run for president?

I'm 41, I've done a lot in my profession. Emotionally, I will not change my attitude to Ukraine, as we owe it is more than a debt. We all have a duty to our country. She raised us. For me, the country is first of all people. The problem is that people are suffering. There are two real leaders: [rock star] Slava Vakarchuk and the other one is me. I want to bring in the power of professional and decent people. I would like to change the mood and timbre of the political establishment, as far as possible.

About the oligarchs and their media

They [oligarchs] should not influence political processes. They need to talk with them, set tough rules. They can not buy parties and individuals — it's a crime. But they have a huge number of enterprises. If we go against them and declare a war, then people will lose jobs and there will be another Maidan in the country. I think they are ready to talk.

There should be no influence on media resources, information atmosphere in the country. It is necessary to consider TV channels as a business, but the information block should not obey [oligarchs]. It is possible to create a special body, which is engaged in the control of information policy. They [oligarchs] should be portfolio investors in television.

About Zelenskiy's new party, Servants of the People

The idea of Servants of the People appeared 11 years before the release of the series and was called "Young Country". Even then, in 2003-2005, we all wanted change.  Do we use this as a support for our campaign - yes, you saw it. In terms of PR, this is a strong story.

We will move towards joining the EU and Nato. It has already been fixed in the Constitution, but it's still a question for Ukrainians. And here, in fact, I see one of the main principles of our programme and its internal principles — democracy. There should be a referendum, and Ukrainians should decide where they are going.

Azov commanders have remained behind in the Mariupol steelworks to continue the fight
Anthems of victory: How Ukraine is winning the online culture war
ISTANBUL BLOG: Erdogan spikes Nato accession talks with Sweden and Finland

Kyrgyzstan: Eccentric health minister fights for his job amid claims of corruption and bullying
29 minutes ago
Azov commanders have remained behind in the Mariupol steelworks to continue the fight
1 hour ago
Russia hopes Chinese carmakers will help revive Moskvitch brand
2 hours ago
Russia may leave the WTO and WHO. In practice, it never really joined
2 hours ago
UN special rapporteur issues damning indictment on human cost of sanctions in Iran
7 hours ago