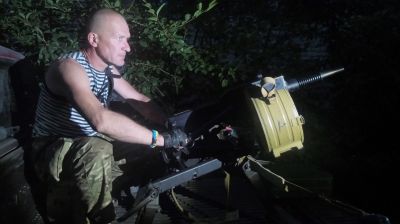 A combatant in the Donbas separatist conflict mans an automatic grenade launcher. / Photo by CC
By bne IntelliNews November 10, 2016

Kyiv is under pressure by EU diplomats to adopt the so called “Steinmeier formula” that would create a special status region in Donbas as a way of breaking the impasse with Russia to end fighting there, but has rejected the idea so far, despite backing by the “Normandy Group” of leaders of Germany, France, Russia and Ukraine.

“The Ukrainian side cannot resort to this because the leaders of the ‘Normandy Quartet’ ordered the four foreign ministers to coordinate a roadmap by the end of November, part of which will be devoted to provisions on security, as well as a political bloc,” Ayvazovskaya wrote on her Facebook page, TASS reports.

Concerted international efforts have contained but failed to fully end the Donbas fighting that claimed around 10,000 lives since pro-Russian rebels engaged with Ukrainian government forces in mid-2014. The issue of local elections has been a main sticking point since the sides adopted the Minsk 2 peace accords in February 2015, with Kyiv insisting on full security before voting can take place. Russia has sorted and represented the rebels in most negotiations in the past two and a half years, while covertly fuelling the conflict with weapons and troops.

Viktoria Talakina, press secretary of the envoy of the self-proclaimed Donetsk People’s Republic (DPR) Denis Pushilin, said earlier that the talks on the German proposals had been “rather unsatisfactory”.

“The results of the 50th session of the subgroup on political issues are far from optimistic. Negotiators failed to progress in discussing key issues of implementing ‘the Steinmeier formula’ and regulations,” Talakina wrote on her Facebook page.

“Precisely political issues are the basis for a peaceful settlement of the conflict in Donbas. The ‘Steinmeier formula’ was approved by participants of the Normandy format, including the Ukrainian president. That’s why Kiev’s refusal to discuss the implementation of this formula represents another attempt to prolong the negotiations process,” she noted.

Steinmeier suggested the special status could be assigned to Donbas on the day of local elections on a temporary basis. It will become permanent only after the Organization for Security and Cooperation in Europe (OSCE) published a report that recognises the legitimacy of voting. The idea was approved at the meeting of the four country leaders in Paris on October 2, 2015.

Holding local elections is one of the most difficult points in the Minsk II agreement that was supposed to bring the conflict to an end. Polls were supposed to be held in 2015.

The issue of a special status for Donbas will be taken up again at the next meeting in Minsk scheduled for November 23.

Poll shows every other Russian supports continuing the war against Ukraine
Ukraine will receive $5.5bn in support from the US later this month
Envoy says start made on construction of Turkish attack drone factory in Ukraine

Ukraine will receive $5.5bn in support from the US later this month
12 hours ago
John Malkovich to turn Skopje into Hollywood of the Balkans
12 hours ago
Envoy says start made on construction of Turkish attack drone factory in Ukraine
22 hours ago
Huge explosion rocks Russian airbase on the Crimean peninsula
1 day ago
Russia cuts oil flow via Ukraine's Druzhba pipeline, blaming sanctions for blocking transit payments
1 day ago