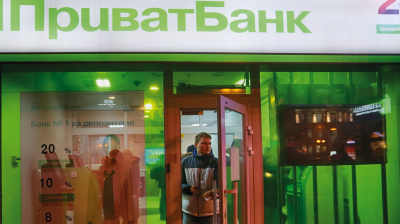 The state controlled PrivatBank suffered a bank run worth $300mn, or 5% of its total deposits, following two court decisions in May that said the 2016 nationalisation of the troubled bank must be undone and the bank returned to its former owners.

“I won!” was the gleeful reaction by Ukrainian oligarch Ihor Kolomoisky to the news that a Kyiv court had ruled that the 2016 nationalisation of his PrivatBank was illegal the previous month.

The bank’s new management and former governor of the National Bank of Ukraine (NBU) Valaria Gontareva told bne IntelliNews in separate interviews that the former owners looted UAH200bn from the bank, or $7.6bn, not the $5.5bn that has previously been reported. The higher figure was confirmed by the management of PrivatBank.

The bank run occurred after a Kyiv court ruled that the NBU failed to prove the existence of a basis for qualifying PJSC CB PrivatBank as insolvent. Another court decision ruled that the letters signed by Kolomoisky promising to recapitalise the bank were also illegal and non-binding.

The decisions delegitimise the grounds on which the regulator decided to nationalise the bank after it found that all its loans were made to related parties and the bank had in effect been emptied of almost $8bn worth of capital, Gontareva told bne IntelliNews in an exclusive interview, in which she called the courts “corrupt.”

The NBU is appealing the decision. PrivatBank was nationalised after a bne IntelliNews cover story “Privat investigations” revealing the high level of related party loans caused such a scandal the NBU took the bank over a month later in December 2016.

The May court decisions unsettled depositors at the bank, which is the largest in the country and almost half the population — some 22mn people — bank with PrivatBank.

The reaction of depositors was to get "a bit nervous" Anna Samarina, PrivatBank's CFO, told bne IntelliNews in an exclusive interview. Customers withdrew UAH8bn ($303mn) from the bank on the news, or some 5% of total deposits, Samarina said.

"As of today, we managed to recover part of that, but we are not back to previous levels," she said, adding that despite the outflow the bank is stable and confidence has been restored.

However, Kolomoisky has launched numerous legal cases against PrivatBank in the hope of recovering some more money.

Kolomoisky said on May 27 that he is ready to sign an “amicable agreement” with the country's authorities in exchange for around 25% of shares in the bank. Separately, he has demanded that $2bn of capital he claims was in the bank at the time of its nationalisation should be returned to him.

At the end of May PrivatBank’s new management went on the offensive and hit back with a case of their own, accusing Kolomoisky of illegally laundering hundreds of millions of dollars through shell companies in Delaware in the US. PrivatBank brought a case against Kolomoisky and his partner who was a co-owner of the bank, Gennadiy Bogolyubov, as well as "other individuals and companies", before the Court of Chancery of the State of Delaware, the bank said in a statement e-mailed to bne IntelliNews on May 23.

"Up to 10% of the bank's operating costs are now dedicated to legal costs," Samarina told Reuters on the side lines of a Ukraine investment conference.

Home of the humbled lira, Turkey’s the biggest cryptocurrency market in the Middle East
Dollarisation in Turkey smashing records
Western capitals wonder what kind of sanctions deal Erdogan may have cooked up with Putin