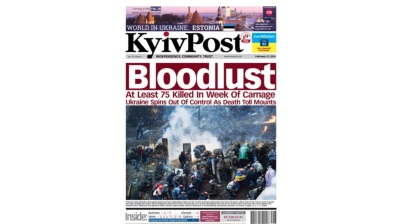 The Kyiv Post has been providing independent news on Ukraine for 26 years, but now has been closed by its owner, sparking speculation that the president's administration is behind the muzzling of an uncomfortably critical voice. / wiki
By bne IntelliNews November 9, 2021

The owner of the Kyiv Post, Ukraine’s oldest and best known English language newspaper, has “temporarily” closed it after 26 years of publishing and its entire staff was sacked on November 8.

“The Kyiv Post has been killed. Our entire team was fired today by the owner, Odesa real estate developer Adnan Kivan. The notice came amid the ongoing attacks on the paper’s independence. @KyivPost has been Ukraine’s Global Voice for 26 years,” staff member Nastasiia Lapatina tweeted, attaching a statement from the members of the newsroom.

"The newsroom's attempt to save the editorial independence of the Kyiv Post elicited opposition from our owner. We consider the cessation of publication and the dismissal of the paper's staff to be an act of vengeance by Adnan Kivan,” the statement said.

The news instantly prompted an outpouring of sympathy and concern on social media. The Kyiv Post has been a mainstay for independent and accurate information on the Ukrainian story for over two and half decades.

“Saddened and deeply concerned with today’s news that the future of the @KyivPost is in jeopardy. Hopeful that a resolution can soon be found and that the excellent publication will continue to be published. Free and independent media are essential for a thriving democracy,” tweeted Andy Hunder, the head of the American Chamber of Commerce in Kyiv.

“We consider the cessation of publication and the dismissal of the paper’s staff to be an act of vengeance by Adnan Kivan,” the staff said.

Kivan is a real estate baron from Odesa with Syrian roots and bought the paper from Zahoor in 2018, paying a reported $3.5mn for the loss-making publication, which survives on subscriptions but has not been in profit for years. At the time Kivan promised to leave the editorial alone and reassured the staff that it would remain independent.

Zahoor, a native of Pakistan and a United Kingdom citizen who made his fortune in the steel industry, bought the Kyiv Post on July 28, 2009 from its original owner, American Jed Sunden, for $1.1mn. Sunden published the first edition of the Kyiv Post on October 18, 1995.

Zahoor fended off multiple offers from buyers fronting for politicians and oligarchs who wanted to buy the Kyiv Post to muzzle its reporting that is frequently critical and embarrassing to them.

Under the Kivan management the paper successfully transitioned to a subscription model after advertising revenues dried up in recent years, but it remained a niche publication and struggled to make profit.

“We have exemplified high professional and ethical standards. That is why every president and government in Ukraine’s history attempted to influence the Kyiv Post,” the staff said.

On one occasion the editor Brian Bonner was sacked when the former owner, Mohammad Zahoor, tried to get Bonner to pull a critical article. However, the entire newsroom came out on strike in protest and Bonner, who has been editor of the paper for most of its existence, was reinstated.

Bonner intends to retire, according to the newsroom statement. He is currently closing down the operations and archiving the papers past issues.

“Desperately sad news: After more than 25 years of bringing independent news about Kyiv and Ukraine in English, it seems the Kyiv Post is to be gutted and turned into another oligarch mouthpiece. All staff said to have been served notice today,” tweeted Euan MacDonald, a former Kyiv Post reporter.

The Kyiv Post has built up a reputation for training a generation of leading journalists in the industry, who cut their teeth in the vibrant and fast moving story. Some alumni have gone on to become correspondents for the mainstream newspapers and magazines, including BuzzFeed, Newsweek and the Wall Street Journal, among many others.

“God bless all of us. One day, we hope to reopen the newspaper bigger and better,” Kivan said. “I thank the entire Kyiv Post team and Brian Bonner for his service to Ukraine and independent journalism in the past 25 years.”

Bonner said that he will retire after closing down the operations of the newspaper and preserving its archives. Bonner thanked Kivan “for this strong support since he bought the newspaper.” 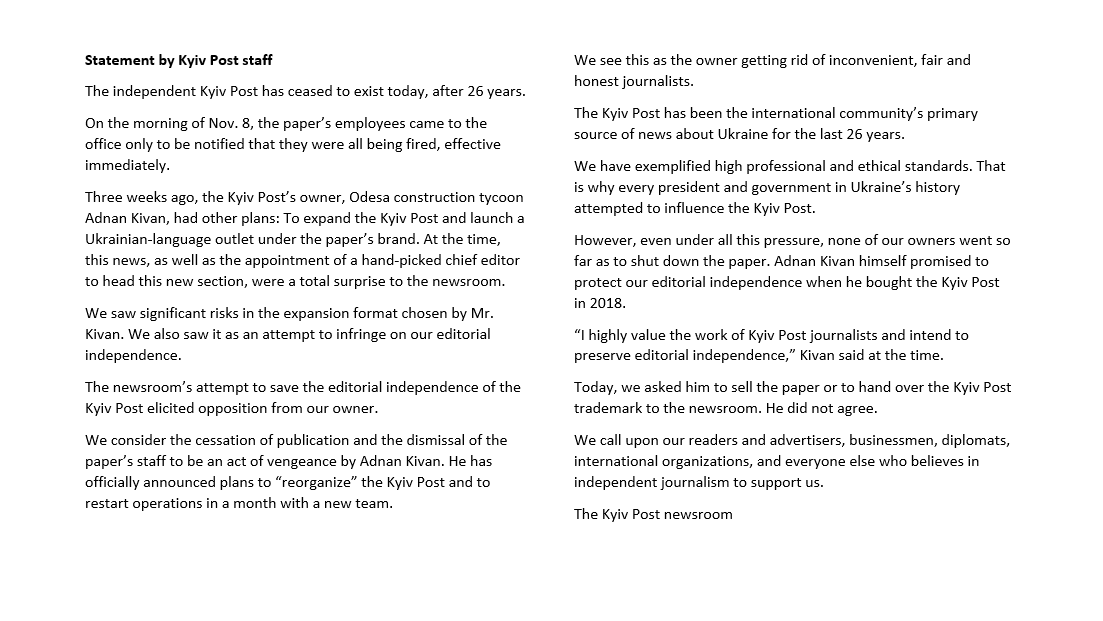 Russia prepares for new attacks against Ukraine from Belarusian territory
Blue and yellow returns to Lyman, Borova and Mikhailivka as Ukraine liberates settlements in east and south
Putin signs off annexation of four Ukrainian regions