Ukraine is in a horrible mess, however Kyiv-based SP Advisors is arguing that the economic slump is near bottom and growth could return at the start of next year.

“Recent macro stats releases show the Ukrainian economy has been hit harder than expected by the war, its related effects and broad structural adjustments. GDP contracted 17.6% yoy in 1Q15 while inflation surged to 60.9% in April – a one-two combo Ukraine last faced during its painful transition to a market economy in the ‘90s,” say the consultants in a note released this week. “The economy is unlikely to see any signs of sustainable recovery through end-2015, but provided reforms gather pace and the military conflict doesn’t escalate, 1Q16 will be the turning point.”

The 17.5% year-on-year fall in the value of GDP in the first quarter was worse than anyone was expecting, caused by a combination of the change of regime and the ongoing military conflict in the east. But the lack of demand in the battered country will be the main drag on growth for the rest of this year.

Annual inflation surged to 60.9% in April – the highest pace of price growth in more than 15 years in Ukraine. And the upward trend of inflation is not over; SP Advisors predicts it will accelerate further in the coming months and reach a peak at 62-63% in August before starting to subside. The end-of-year prediction is for 46% inflation against the 34% reported in 2014. SP Advisors argues the Consumer Price Index growth won’t return to single digits before the second half of 2017.

As a result of the collapse in industrial output, Evgeny Gavrilenkov, chief economist at Sberbank CIB, believes the structure of Ukraine’s economy has changed, with agricultural exports now accounting for around 35% of total exports (versus 28% in the first quarter of 2014), crowding out the metals sector. “I expect the contraction to deepen in 2015, as growth turned more negative across the board in the first quarter of 2015. We are not ruling out double digit negative GDP growth in 2015.”

A definitive end to the fighting in the Donbas region would play a crucial role in any return to economic health, but a return of consumer confidence is equally important for any prospective turnaround. And there are signs that the worst has passed. Despite the raft of bad news, some argue that Ukraine’s economy seems to have reached its nadir. “April data show the downward trend has flattened – the economy contracted materially, but it has likely reached the bottom,” SP Advisors says.

The fighting has dominated the news flow, but the shaky ceasefire seems to be holding – or at least it has reduced the fighting to a relatively low level confined to a small corner of the country. Life is slowly returning to normal in the rest of the country. SP Advisors argues that the impact of high inflation on consumer demand is now the limiting factor on the start of an economic recovery as much as the falling off of hostilities. “Looking forward, however, we believe weakening domestic private demand will be the key drag on economic activities in the second half of 2015. An uptick in inflation that has put a dent in households’ real income, numerous banks bankruptcies that have fuelled a one-off decline in the stock of wealth (and this is still not the end of the story), and weak consumer sentiment all bode badly for private demand – we project a real decline of 15-18% in 2015 (vs. -9.6% in 2014),” says SP Advisors

Investment and construction are the other two big economic drivers of growth in normal economies, but the uncertainties and frozen banking sector have shut both these activities down for the meantime; SP Advisors estimates investment will fall by more than 30% in 2015 following a 23% contraction in 2013.

The silver lining to all the economic problems is that in addition to killing production and exports, they have also curtailed imports, so the country's balance of payments is flat after having been in deficit in excess of $3bn in the last quarter of 2014.

Still, this year's growth prospects are likely to be among the worst on record. The European Bank for Reconstruction and Development (EBRD) recently sharply revised down its GDP forecast for this year to a 7.5% contraction from 5% at the start of the year, as did the government. SP Advisors is even more pessimistic, downgrading their year-end GDP prediction from an 8.6% contraction to 10.1%.

The EBRD predicts the economy should recover to 3% growth in 2016, “assuming that the security situation does not deteriorate and the IMF loan programme provisionally agreed in March remains on track,” the EBRD said in May.

The National Bank of Ukraine is closer to SP Advisors, forecasting a second-quarter GDP contraction of 10.2% on the year, a third-quarter drop of 5.7%, but fourth-quarter growth of 2%. However, Ukraine's budget for 2015 assumes a fall in GDP of 5.5% under an optimistic scenario, 8.6% as a middle scenario, and 11.9% as a worst-case scenario before returning to growth in 2016. “With the high base effect (ie. one that included the war-affected zone) set to fade in the coming quarters, the economy will see a modest 2-3% pickup in 2016,” says SP Advisors. “Mid-term growth prospects are dependent on the pace of reforms and Ukraine’s ability to contain the war in the east.” 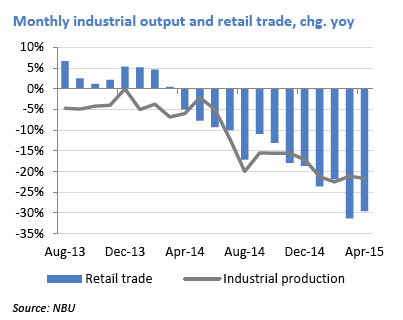 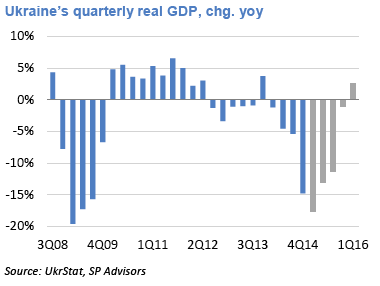 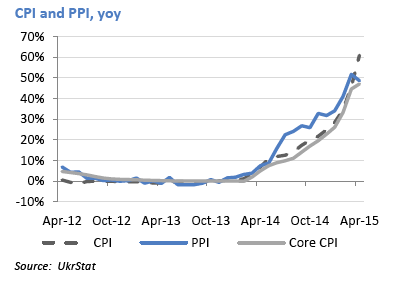