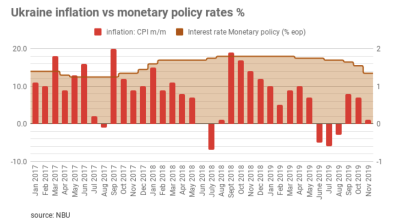 The National Bank of Ukraine (NBU) slashed its key policy rate by two full percentage points (pp) to 13.5% on December 13 from previous level of 15.5% taking the rate to its lowest level in two years, the regulator said in a statement on December 12.

The dramatic cut follows on from the previous large 150bp cut last month and has been made possible by the accelerating fall in inflation, which was down to 5.1% in November after starting the year at over 9%. However, thanks to the falling inflation rate even after the deep cut in interest rates this year Ukraine still has amongst the highest real interest rates in the world of 8.4%.

"The NBU is speeding up the monetary policy easing, as the rapid appreciation of the hryvnia makes inflationary pressures decline faster than expected," the statement reads.

The hryvnia is one of the best performing currencies in the world after it gained over 15% YTD and cross over the psychologically important UAH24 to the dollar mark earlier this month.

But the NBU’s success has been in fighting inflation. Inflation has been coming down since the economic collapse in 2015 but in the autumn the NBU was forced to impose a painful rate hike as prices began to creep up again on the back of rising food costs reaching 10% in November that year. The intervention proved to be very successful and inflation has been falling steadily since then.

In November, consumer inflation decreased sharply, reaching 5.1% year-on-year, which was below the NBU’s latest forecast and has now already reached the regulator’s medium-term target of 5%, set by the NBU in 2015.

"The steady disinflation has been driven by a gradual easing of underlying pressures on prices, reflected in a slowdown of core inflation, and by lower energy prices. Inflation slowed markedly due to both the strengthening of the hryvnia and an improvement in inflation expectations. The above factors neutralized the pressure on prices from robust consumer demand and worse harvest of some vegetables."

The hryvnia strengthened due to several reasons. In October-November, the excess supply of foreign currency was mainly driven by proceeds from Ukrainian exports, in particular thanks to a record harvest of grain and oil crops, and selling foreign currency coming from borrowings of state-owned companies. Foreigners have invested a total of $4bn into hryvnia government bonds and been a major source of inbound currency but this did not have major influence on the foreign exchange market, unlike in the past months, according to the NBU.

At the same time, the central bank actively purchased excess foreign currency to replenish international reserves – a policy it intends to continue into the first quarter of next year. Net foreign exchange interventions have totalled over $5.5bn since the start of 2019.

According to the NBU, December's staff-level agreement on a new $5.5bn Extended Fund Facility (EFF) support programme with the International Monetary Fund (IMF) "is an important milestone in the progress of structural reforms in Ukraine as well as in maintaining macro-financial stability and steady economic growth.

At the same time, other risks that the NBU took into consideration when making its previous monetary policy decision remain in place. In particular, the risk of rising threats to macro-financial stability persists because of court rulings and pressure on the NBU. If they materialize, these risks could worsen exchange rate and inflation expectations, and make it harder for Ukraine to access the international capital markets at a time when debt repayments are peaking.

According to regulator, the following external risks remain relevant: a complete halt of the transit of Russian gas through Ukraine; intensified trade tensions and more turbulent global financial markets; as well as an escalation of the military conflict and new trade restrictions introduced by Russia.

"Therefore, macroeconomic conditions that are more conducive lower inflation, continued cooperation with the IMF, and the practically unchanged balance of risks have enabled the NBU to ease monetary policy more quickly," the regulator added.