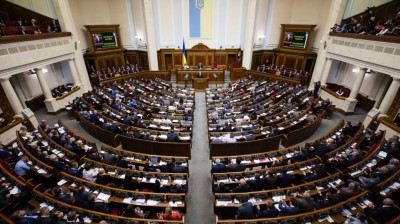 Ukraine has made Ukrainian the only official language
By bne IntelliNews April 25, 2019

Ukraine's parliament, the Verkhovna Rada, adopted on April 25 a draft law on the Ukrainian language, which provides for the mandatory use of the national language by government agencies, local self-government and in other spheres of public life that is a set back for “rebooting” the peace process promised by Ukraine’s president-elect Volodymyr Zelenskiy.

Zelenskiy’s position on the law is unclear. While he has said that he will protect and promote Ukrainian, he also said he has “questions” about the new language law.

The motion was supported by 278 lawmakers from a total of 450, according to news agency Interfax. The draft law says that it is not applicable to the sphere of private communication and the implementation of religious rites. Ukrainians are allowed to talk to each other in any language they like, but all official communication must now be in Ukrainian. Russian-language newspapers must now publish a Ukrainian version of their publication. TV and film distribution firms must ensure 90% of their content is in Ukrainian and Ukrainian-language print media and books must have at least half their content in the national language.

Software user interfaces must also have Ukrainian version, although English and other EU languages are also permissible under the law.

The Kremlin was quick to condemn the law, which is sees as impinging on the rights of ethnic Russians living in Ukraine. The country is broadly divided into the Ukrainian-speaking western provinces and Russian-speaking eastern provinces. Russian is widely spoken and is even the predominant working language in the capital Kyiv.

Outgoing President Petro Poroshenko said he will sign the bill into law as one of his last acts as president before he steps down in June.

"The Ukrainian language is a symbol of our people, our state and our nation," Poroshenko wrote his Facebook page immediately after the vote on the law. "It is another important step on the way toward our mental independence."

The law was passed in its first reading on October 4 last year and 2,500 amendments were suggested for the second reading -- most of which were rejected.

The law "Providing the functioning of the Ukrainian language as the official one" stipulates that Ukrainian is the sole official language in the country. Attempts to introduce other languages (ie Russian) as an official language are recognized as "directed at the forcible change or overthrow of the constitutional regime" by the new law.

The concept of "public degradation of the Ukrainian language" has also been introduced in the new law, which has been made a crime and an "illegal action which equals abuse of the state symbols of Ukraine and is punished under the law."

The law also calls for a new post of Commissioner for the Official Language Protection, appointed by the cabinet of ministers. Language inspectors working under the commissioner will monitor compliance with the law.

The law also introduces a language prophiciency requirement for top government jobs, including that of president. Zelenskiy speaks Ukrainian, but he is already reportedly looking for a teacher to improve his language skills.

Those who violate the language law norms may face fines of up to UAH11,900 ($450) but those that try and introduce “multilingualism” can be jailed.

The language law comes hard on the heels of a decree signed by Russian president Vladimir Putin on April 24 that eases the process of obtaining a Russian passport for inhabitant of the Donbas region in eastern Ukraine that is widely seen as a Russian provocation of the new Zelenskiy administration.

The passport decree is seen by some as a warning to Kyiv ahead of the language law reading as the Kremlin is both objecting to the language law and promoting the passport law on the basis of “humanitarian grounds.” Russia claims that it protecting the human rights of its ethnic countrymen in Ukraine.

"We, including myself, are very far from provoking anybody," Putin said while in Vladivostok where he is meeting with North Korean leader Kim Jong Un. "The passports-related issue is purely humanitarian."

Similar language laws in the Baltics have been a source of constant tension where ethnic Russian living there are required to learn the difficult local languages and claim they are discriminated against if they fail.

A survey conducted by the Kiev International Institute of Sociology showed that the Ukrainian language is used by 32.4% of Ukrainian families, while Russian is used by 15.8%. About a quarter of Ukrainians use both languages, reports Reuters.

The language law will also inflame a Ukraine-Hungary diplomatic dispute connected to language.

Hungary has blocked Ukraine’s aspirations to join NATO and the European Union (EU) since Kyiv announced its plans to amend its language law, which drew harsh criticism from Budapest, as some 160,000 ethnic Hungarian minority in Ukraine often uses Hungarian in public life. The regions on the Ukraine-Hungarian border are home to ethnic Hungarians who use Hungarian as their lingua franca.

In September 2017, Ukrainian President Petro Poroshenko signed a new Ukrainian education law, which, according to Hungary, violates the principles of the Ukraine-EU association agreement, and Budapest wants to initiate a review of the document.

According to the new legislation in the future children from national minorities will be taught all subjects in Ukrainian from the fifth grade upwards (age 10). Poland and Romania have also expressed concern about the norms of the new law, which was mainly targeted at the Russian-speaking population living in the eastern regions of Ukraine.

Ukraine also has Romanian and Polish minorities that speak these languages as their lingua franca.