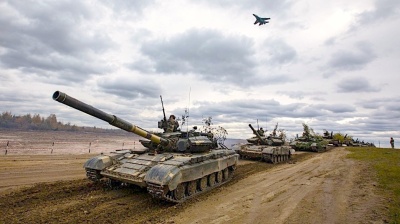 Ukraine's Tymoshenko is looking for a new format for peace talks with Russia
By bne IntelliNews October 25, 2018

Ukraine's opposition leader, former prime minister and the leader of the Batkivshchyna (Fatherland) party Yulia Tymoshenko is going to change the format of negotiations with the Kremlin to attempt to bring Russian military aggression against Kyiv to an end.

"We need peace, but not under the terms and conditions of the aggressor," Interfax news agency quoted her as saying on October 24. "We will achieve peace, but on Ukraine’s terms. We will return our Ukrainian Donbas. Ukrainian laws will be restored in Donbas. It will be a demilitarised territory. And we will let two million refugees there go home."

Over the past two and a half years, the Normandy format representatives (Germany, France, Ukraine and Russia) failed to secure any significant progress during talks on settling the conflict, which erupted in 2014 as pro-Russian separatists in East Ukraine broke away from Kyiv's central control. Around 11,000 servicemen, rebels and civilians have so far died.

The war with Russia in the east of the country is clearly going to be a big issue in next year’s presidential election. Tymoshenko is currently leading the polls and is more than ten percentage points ahead of her nearest rival, but needs to put a creditable plan to end the fighting together ahead of the elections.

In 2016, the leaders of Ukraine, Russia, Germany and France agreed in Berlin to draft a new road map for the implementation of the Minsk peace accords reached in the capital in 2015. The road map is intended to ensure the success of political, security and humanitarian measures in the Donbas region. However, the Minsk process has largely stalled with both sides missing several key deadlines.

The Kremlin rejects any security preconditions and wants the polls to go ahead in the Donbas at the earliest date. The position was strengthened by German Chancellor Angela Merkel’s comments at the Berlin summit that Ukraine should regain full control of the occupied border “only at the end of the process”, a position also indicated by France’s then president Francois Hollande a few days earlier.

However, the sides agreed that OSCE observers could move freely up to the border, Merkel added in widely reported comments.

Ukrainian President Petro Poroshenko in turn insisted that “all foreign troops” must be unconditionally withdrawn from rebel-held areas before local elections, a reference to the Russian military, despite Moscow’s insistence that it has no forces in Ukraine.

Other measures sought include a more durable ceasefire, observance of the disengagement regime, the release of prisoners, and unrestricted access for OSCE mission staff to all areas, an issue that has constantly hampered efforts to monitor both sides’ commitment to demilitarisation in the conflict zone.

Earlier, Poroshenko said that Kyiv favours the deployment of a full-scale UN peacekeeping mission in Donbas. However, the mission's purpose "should be not to perpetuate the Russian occupation and legalise the Russian military presence but ensure durable peace in certain districts of the Donetsk and Luhansk regions of Ukraine and fully restore our state's territorial integrity".

Kyiv also insists that the UN mission should comply with the guiding principles of UN peacekeeping operations, which a priori rule out the participation of an aggressor country or a party to the conflict in it, which mean that the Ukrainian leadership opposes including the Russians in the mission.

Zelenskiy loses more ground in the polls as his Servant of the People approval falls to 26%
FPRI BMB Ukraine: Russia’s “passportization” of the Donbas
FPRI BMB Ukraine: A shaky ceasefire is holding in Donbas for the moment