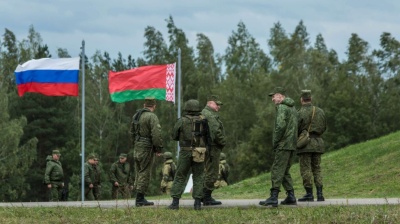 During a live-streamed press briefing on Thursday, October 20, Ukrainian General Oleksii Gromov told reporters that Ukraine does not consider the build-up of Russian and Belarusian forces along the Belarus-Ukraine border to be purely “demonstrative actions,” and emphasised that the threat of a renewed invasion from Belarus remains.

On Wednesday, the spokesman for Ukraine’s armed forces, Yevhen Silkin, said during a TV broadcast that “the probability of a repeated invasion of Ukraine is very low, but cannot be completely discounted.” Silkin added that according to Ukraine’s current assessment, Russia and Belarus will not be able to accumulate enough forces for a renewed offensive this year, but that the threat could significantly increase next spring.

After Lukashenko’s meeting with Putin in late September, Lukashenko seems pressed to increase his military support to Russia somehow. However, the Minsk regime’s insecurity shines through its hard-line rhetoric. While Belarus’ foreign minister declared that Belarus had initiated a counter-terrorist operation on October 13, Belarus’ security service KGB refuted his claim and he had to officially take back his initial statement only the next day. However, in general, both the KGB and Belarus’ Defence Ministry are working hard to push Lukashenko’s narrative that Ukraine and Belarus’ neighbouring Nato countries are preparing for war as well as constantly threatening and violating Belarus’ borders.

While Russia has sent around 9,000 mobilised troops along with the remnants of one of its elite divisions that suffered heavy losses in Ukraine earlier this year, these forces are not enough to conduct a renewed land invasion. Especially not since Ukraine has set up minefields and blown up bridges and blocked roads along the border throughout the summer.

However, Russia has increased its missile and drone assaults on Ukraine from Belarusian territory in October. Since Russia continues to send more jets, missile systems and drones to Belarus, these strikes can be expected to increase also in the near future.

Whether Minsk will call for its own general or partial mobilisation or not has been a hot topic ever since Putin announced partial mobilisation in Russia. In the past couple of weeks, there’s been significant battle for narrative concerning this question between oppositional Belarusian media on the one hand and state-controlled Belarusian media on the other, with oppositional news outlets (specifically Nash Niva’s article) claiming that Belarus will mobilise, while state officials repeatedly assert that call-ups to enlistment offices are purely routine.

A report by Ukraine’s military intelligence (GUR) recently shed some light on this question, saying that Minsk is too afraid to call for mobilisation, as it could trigger unrest. Instead, according to GUR, Lukashenko has ramped up his war rhetoric significantly, asked for more Russian troops in Belarus and facilitated more Russian airstrikes from Belarusian territory, to prove to Putin that he is a good ally who helps to tie up and divert Ukrainian forces from the south and east.

At the same time, GUR claimed that the current reports of Belarusian men being called to enlistment offices for “checks” (which has been a hot focus for oppositional Belarusian media) pertain to a strategy by Belarus’ security services. This strategy aims to covertly study various reactions from society and Belarusian’s readiness to join in on new protests if mobilisation were to be announced.

According to independent opinion polls, Belarusian’s attitude towards the war has changed in the Kremlin’s favour.

This year Minsk has increased its repressions against public dissent and gradually pushed Moscow’s narrative of the war, which clearly has worked, albeit slowly. Nevertheless, the GUR noted that the Belarusian security services’ attempts at feeling out the public’s readiness is a clear indication that they do not trust that they have support from the majority of the population for beginning mobilisation.

Kyiv and the exiled Belarusian opposition

On October 12, Ukraine’s presidential advisor Oleksii Arestovych criticised the Ukrainian political class for chastising Belarusians for not violently opposing Belarusian strongman Alexander Lukashenko. Arestovych said that Ukraine had made very serious mistakes in relation to Belarus, one of these mistakes being its inability to separate the people from the regime.

In the light of increased tensions between Belarus and Ukraine, Belarus’ exiled opposition leader Svetlana Tikhanovskaya proposed that Kyiv should ally itself with her newly formed “United Transitional Committee.” However, she’s received a very lukewarm response.

In 2020, Tikhanovskaya and the Belarusian opposition still had hopes that they could be accepted by the Kremlin. Up until recently, she was afraid of firmly condemning the Kremlin’s actions too, so as to not lose support from the many pro-Russian people in Belarus, since even if they don’t support the war or sympathise with Ukraine, many Belarusians still believe that Belarus should stay close to Russia.

In response to Tikhanovskaya’s proposal to Kyiv, two members of Ukraine’s parliament said that they could not recognise Tikhanovskaya and her cabinet since its stance on Russia remained unclear; besides this, they also questioned the credibility of people close to Tikhanovskaya.

Instead, members of Ukraine’s parliament held a meeting with members of the Belarusian volunteer regiment, the Kastuś Kalinoŭski Regiment, and agreed on future co-operation in the “liberation struggle of Ukrainian and Belarusian peoples.” Afterwards, Ukraine's parliament also brought up the question of recognising Belarus as being "temporarily occupied by Russia," a question which Tikhanovskaya has been pushing since March this year.

While Tikhanovskaya has kept an ambiguous outlook towards Russia, her cabinet successfully directed the work of Belarus’ railway partisans this spring, has its own intelligence resources around Belarus and still unites foreign political activity of many Belarusian expats. In a recent call to Belarusians Tikhanovskaya called for them to “defect” and “switch sides” if they were forced into the war with Ukraine.

Ukraine may not be able to recognise Tikhanovskaya’s cabinet to save face. However, successful co-operation with her, and not just with the Kastuś Kalinoŭski Regiment, is crucial if Ukraine wishes to turn the unrest arising from a possible mobilisation decree in Belarus to its full advantage.