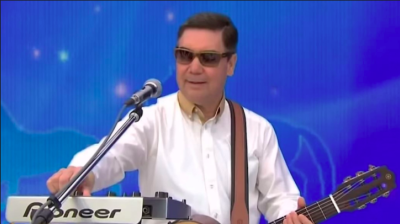 Turkmen President Gurbanguly Berdimuhamedov, 62, is rumoured to have died this week
By bne IntelliNews July 21, 2019

Turkmen President Gurbanguly Berdimuhamedov, 62, is rumoured to have died this week, Russian news agency Govorit Moskva reported, citing the director of the Centre for Monitoring Eurasian Affairs, Aslan Rubayev, who in turn referred to anonymous Turkmen businessmen in Ashgabat with ties to the Turkmen state security service.

Turkmen ambassador to Russia, Shadurdy Mereyov, told Russian TASS news agency on July 21 that the reports were "an absolute hoax". Moreover, the Turkmen government's website posted an official note on the same day, attributed to Berdimuhamedov, congratulating Turkmen medical workers with the award of a medical workers' day holiday.

When neighbouring Uzbekistan’s President Islam Karimov died in 2016, independent reports similarly came out much earlier than the government’s official confirmation of his death.

If the death is confirmed, Berdimuhamedov, who has run the former Soviet republic since 2006 while tolerating no dissent, would be leaving a legacy of economic disaster, rationing and shortages of food and basic goods at stores and unpaid dues to multiple foreign companies.

Berdimuhamedov is also known for his dubious spending habits. Despite his country’s economic mess, the Turkmen leader has unveiled Turkmenistan's first golf course, a designer 18-hole attraction in a country where golf is virtually unheard of. Turkmenistan also spent $10bn on hosting the 2017 Asian Indoor and Martial Arts Games, which turned out to be another vanity project—the preparations for the Asian Games included a $2.3bn falcon-shaped airport.

All of this was happening amid the country’s commitments to fund 85% of the construction costs for the $10bn Turkmenistan-Afghanistan-Pakistan-India (TAPI) natural gas pipeline, the construction of which has just entered its Afghan phase.

If the Turkmen leader has indeed passed away, then the Turkmen elites will likely keep denying any reports of his death until they can decide on a successor.

The country went through similar machinations when its previous leader Saparmurat Niyazov, better known as Turkmenbashi, or “Father fo the Turkmens,” died in 2006. As bne IntelliNews reported at the time the news of the death was delayed for weeks while the elite of the country settled on a replacement. While the head of the security services was very nearly selected in the end the relatively unknown Berdimuhamedov got the job. Unconfirmed reports say that Berdimuhamedov is actually Niyazov’s illegitimate son.

Berdimuhamedov’s son Serdar Berdimuhamedov, 37, has been long rumoured to be his father’s potential successor, but hereditary transit of power is not a rule in Central Asia. Gulnara Karimova, the daughter of Uzbekistan’s Islam Karimov made a bid for power shortly before her father died, only to end up under house arrest. However, Azerbaijan’s Ilham Aliyev is the son of the previous leader Heydar Aliyev and retains a firm control over the power.

Serdar Berdimuhamedov, who was appointed as a provincial governor last month, has previously headed a parliamentary committee on legal affairs in 2017-2018 and was appointed as a deputy foreign minister in March last year. He will certainly be in the running to be made leader, but as the change in leadership in Uzebkistan showed the decision will ultimately be made by a cabal of the country’s elite behind closed doors.

Last year, the Washington-based Freedom House NGO assessed Turkmenistan as among the 12 “worst of the worst countries” for political freedom and civil liberties. None of the country’s previous elections have been deemed free or fair by Western monitors and Berdimuhamedov, won his third presidential term in February last year with 97% of the vote.