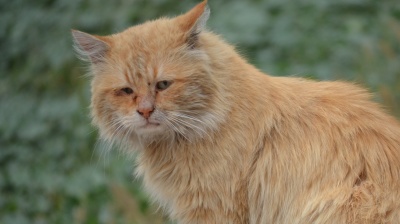 A sad cat in Ulus, Ankara. The Turkish financials may have perked up lately, but out on the street things are looking a bit shabby (With apologies for being reduced to a shabby cat story, Ed.).
By bne IntelliNews December 6, 2018

Turkey looks set to enter a recession that will spark rocketing unemployment and morph into future growth rates that will be below the economy’s potential.

Refet Gurkaynak, a professor of economics at Bilkent University in Ankara, was on December 5 quoted by Bloomberg on the outlook for Turkey as it enters a downturn brought on by this year’s Turkish lira crisis.

“This time we’ll grow below potential,” Gurkaynak said, predicting that unemployment would go “through the roof”. Turkey’s joblessness rate stands at 11.1%.

“What we have seen in previous years was a push to boost demand in order to achieve growth above the economy’s potential. Now we are paying the price of that decision,” he said.

The lira has lately pulled back a good deal of the losses that in August saw it weaken as much as 46% against the dollar in the year to date—it is currently around a third down agains the USD—but companies now face a toxic mix of high debt and interest rates.

The spike in the central bank’s benchmark rate in September following on the heels of the currency crisis has crippled some companies, cutting demand for new loans and investments. The slump, coupled with weak consumer demand, is liable to hamper growth in the third quarter and produce an economic contraction in the fourth quarter and possibly beyond, according to Inan Demir, an economist at Nomura International in London, as quoted by the news agency.

“Compared to previous instances when Turkey has seen a V-shaped recovery, the most important difference is the high leverage in the economy,” he said.

One of the more pessimistic growth forecasts for Turkey comes from Citi Research. The bank has cut its 2018 growth forecast for the country to 3% from 3.5% and it predicts the Turkish economy will shrink 3.3% next year due to weak domestic demand.

Turkish President Recep Tayyip Erdogan has built his 16 years of political success mostly on economic growth boosted by credit and demand, but economists increasingly say his growth strategy is unsustainable and believe that it has reached its limits.

The government, however, is sticking to its growth guns. It lately reduced taxes on products including cars and big-ticket kitchen appliances until the year’s end. It undoubtedly has one eye on the local elections due on March 31, 2019.

Turkish companies are weighed down by $324.5bn of foreign currency liabilities. The shortfall is still $210.1bn when it is netted against their assets, the news service calculated.

Corporate loan rates were as high as 36% in September following the central bank’s 625-basis-point interest rate hike to address the nosediving lira.

Past slowdowns have been rooted in government debt. This one seems mired corporate indebtedness.

Corporate and consumer loans over a rolling 13-week period and adjusted for foreign-currency fluctuations fell more than 10% as of November 23, according to central bank data. Central bank governor Murat Cetinkaya has said the figures were below historical averages.

“Banks are even making it difficult for my company to get loans, despite our limited currency risk thanks to exports,” said Laura Gok, the founder of Turkish textile chemicals manufacturer Resas Chemie told Bloomberg. Her company has annual revenue of 50mn lira ($9.5mn) and exports almost everything it produces to Bangladesh. “Lenders should be more supportive of producers in a time like this,” she said.