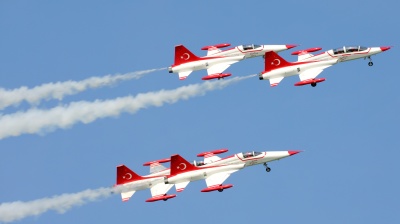 Wanted by Ankara: More believers in the trajectory of Turkey's economic recovery. / konflikty.pl
By Akin Nazli in Belgrade March 13, 2019

The pricings would be in line with Akbank’s recent refinancing, the publication added.

On February 8, Reuters reported that Akbank was seeking $600mn worth of refinancing for a $1.2bn-equivalent syndicated loan maturing in March. Akbank said in an emailed statement that it had decreased all-in pricing across its USD/EUR tranche by 25 basis points (to Libor+250 bps/Euribor+240 bps) on its 1-year March 2019 syndicated loan facility. Bank of America, Emirates NBC, ICBC and Standard Chartered co­ordinated Akbank’s transaction.

Following the currency crisis in Turkey that reached its worst point last August, the country’s external debt refinancing journey was reinitiated by Akbank’s syndicated loan renewal at more than double cost in September. Other local lenders followed the path opened up by Akbank.

Selling at bold yields
In October, the government returned to the market with a eurobond issue held at what was seen as an incredibly high cost of 7.5%. Since then, the government has been selling eurobonds at bold yields despite the limited recovery trend in Turkey. Private corporations and public lenders have joined the state in selling eurobonds since the beginning of this year thanks to eased global liquidity conditions.

The pinkish global sentiment for emerging markets has been losing steam of late but it is still in evidence, thus Turkish lenders are in the capital markets queue to refinance their syndicated loans through March and April. The costs are expected to be comparatively lower than the levels experienced in September to October, but will likely be markedly higher than the April levels of nearly a year ago. Eurobond sales are also expected to continue.

Meanwhile, the government’s interventions on the domestic bond market continue to create anomalies, with regulatory enforcements pushed through to achieve the desired normalisation in economic activity.

No belief in lira rates
However, neither foreign nor local investors appear to believe in the current Turkish lira exchange rates. The local currency remains around a third weaker against the USD than it was at the start of 2018, though at around 5.46 levels (which it was trading at as of around 21:45 Istanbul time on March 13) it is significantly stronger than the all-time low of 7.24 it recorded at one point last August.

Despite the improvement, locals continue to buy FX while foreigners are selling lira bonds but, unlike Turks, they last week seemed confident in Turkish equities. This week’s tumble in the Borsa Istanbul is being closely watched and it will be clearer after next week’s data releases on weekly portfolio flows whether it points to a turn in foreign investor sentiment.

Last week also saw the umpteenth re-escalation of the row between Nato allies Washington and Ankara over the latter’s plan to deploy Russia’s S-400 advanced missile defence system, but this week’s quietish news flow on the matter in Turkey may be a sign of ongoing backdoor negotiations. Turkish President Recep Tayyip Erdogan, who at one time, when global liquidity conditions were kinder, thought nothing of yelling accusations at his Western allies during election rallies, ahead of the March 31 municipal polls presently seems rather more focused on vague, shadowy conspiracies patriotic Turks should apparently be trying to untangle, angry rhetoric targeting opposition candidates and jailing people on absurd charges that challenge previous thresholds in unlawfulness and surrealism.

S-400 row a (delayed?) threat to economy
Erdogan’s ability to simultaneously please his Russian and American geopolitical allies and counterparts, Vladimir Putin and Donald Trump, will very probably determine the future direction of Turkey’s markets. A possible decisive row with the US over the S-400 matter, which Erdogan is patently trying to delay until after the local elections, continues to carry the risk of causing a fresh detonation under the damaged economy. The Iran sanctions brought in by the US and Washington’s alliance with Syrian Kurd militants also remain as extremely problematic in Erdogan-Trump relations, but it is the missile defence disagreement, for which a solution that does not annoy the Russians is needed, that is most particularly flashing red.

Despite his ongoing troubles in domestic politics which can be traced back to 2013, a serious threat to what some critics describe as Erdogan’s banana republic rule is not visible yet—the opposition keeps trying to invite Erdogan back into the field of democracy despite his growing disrespect for laws that were once thought essential and vital to Turkey having a chance of one day joining the European Union.

His opponents keep hoping that Erdogan will lose some substantial ground in the local polls despite the undemocratic, unfair and even unlawful environment that they will take place in, but Erdogan seems determined that, by hook or crook, his AKP party will not lose its grip on Istanbul and Ankara. And even if he has to tolerate some embarrassing losses at the polls, Erdogan will continue to rule the country as long as he keeps his global recognition.

Market players still see Erdogan’s rule as market positive, whatever human rights indignities ordinary Turks have to suffer on the ground (including hundreds of business people who have lost ownership of, or stakes in, enterprises because of nebulous accusations from officials about their alleged links to claimed coup plotters).

All in all, Turkey continues to carry significant risks that could destroy its economy at a single moment, but Erdogan always manages to delay the recognition and impact of insoluble risk fields that have emerged under his rule.

New deposit obligations for money market funds
On March 12, the Capital Markets Board of Turkey (SPK) announced that money market funds will be obliged to hold a minimum of 50% of their portfolios as deposits at local lenders as of March 15 at the latest. A maximum 6% of the funds can be held at a single lender while a maximum 40% of the funds can be invested in reverse repo and other money market transactions, according to the latest legislative amendment.

According to the previous legislation, the money market funds were able to hold a maximum 10% of their portfolios as deposits, while sector representatives told Reuters on March 13 that the money market funds were holding only 1% of their portfolios as deposits since deposit rates standing between 13.5% and 22% compared relatively lower than what was on offer under the central bank’s one-week repo rate of 24% and reverse repo rates at 22.5%. Annual inflation stands at just under 20% in Turkey.

As a result of the government’s continuing efforts to “encourage” local lenders to cut deposit rates with the aim of “encouraging” them to boost lending at lower rates, the money market funds’ overall volume rose by 108% to TRY29.5bn as of March 13 from TRY12.8bn as of end-2018, according to latest available data from clearing and settlement bank Takasbank.

Around TRY15bn worth of funds will be directed to bank deposits, according to Reuters.

Nilufer Sezgin of Is Portfolio told Reuters that the latest amendment would result in a limited 1.5% increase in the overall deposit volume.

Growing risks in dollarization
With the government going through exertions to push lira rates down, the dollarization problem is becoming more significant.

“The growing prevalence of foreign currency deposits in Turkey’s banking sector is symptomatic of the country’s longstanding inflation problem. Unless the central bank breaks with the past and brings down inflation on a sustained basis, deposit dollarization is likely to become more widespread and risks in local banks will intensify,” Jason Tuvey of Capital Economics said on March 13 in a research note entitled “Turkey and the problem of deposit dollarization”.

FX deposits at Turkish lenders now account for around 50% of total deposits, up from around 30% in 2010.

“The widely-reported jump in FX deposits recently has reflected households rebuilding their FX savings following the lira crisis. And, more than anything, the long-term trend towards greater dollarization appears to be the result of diminishing confidence in the lira as a store of value,” Tuvey also noted.

“Perhaps the biggest threat, though, would be if there is a shock that triggers a withdrawal of FX deposits,” Tuvey also said, adding that the central bank’s ability to provide FX liquidity is limited by its low FX reserve coverage.

Dollarization also reduces the effectiveness of domestic monetary policy, according to Tuvey.