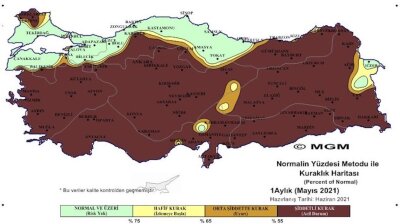 Turkey is facing an ongoing drought although media attention fell away from the issue after Istanbul's status turned "green".
By Akin Nazli in Belgrade June 21, 2021

A market anomaly has come to the fore and Turkish stockbreeders have caught a reaction from flour makers after turning to wheat due to lower prices.

Turkey’s barley production for the 2021/22 marketing year is estimated at 6.2mn tonnes, down 23% y/y and lower by 11% compared to the previous estimate, given in May, the US Department of Agriculture (USDA) said on June 10 in its latest World Agricultural Production report.

In May, precipitation in Turkey was down 66% y/y. It was also recorded at 56% below the seasonal average.