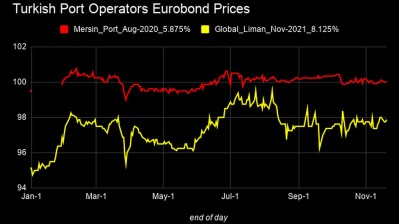 Turkey’s Mersin International Port (MIP), the company that operates the country’s largest port terminal by both tonnage capacity and import/export container throughput, on November 7 sold $600mn of 5-year eurobonds due November 15, 2024 (XS2071397850) at a price of 99.676% and a coupon rate of 5.375%, Cbonds reported on November 19.

Citigroup, DBS and HSBC acted as bookrunners for the bond while Clearstream Banking S.A., DTCC, Euroclear Bank and Federal Reserve System were the depository trust companies.

There is yet to be an official announcement on the transaction from MIP.

On November 4, Reuters reported that the port operator mandated the bookrunners to sell $550mn of 5-year paper.

A subsequent Reuters report suggested on November 7 that the initial price guidance for the 5-year eurobond was set at more than 5%.

On November 15, the European Bank of Reconstruction and Development (EBRD) said it had bought $90mn worth of the MIP paper.

Singapore's PSA International controls 51% of MIP while Australia’s IFM Investors has a 39% stake and Akfen Holding of Turkey owns the remaining 10%.

In September, MIP said its eurobonds, listed on the Irish Stock Exchange, had become callable at par.

The activity of eurobond issuers across the Emerging Europe, EMEA and Eurasia regions, which has risen since last month, is still growing with the latest ruble-denominated eurobond sale by Russian hydropower major Rushydro a clear sign that the latest Fed easing is moving capital, albeit not as yet at levels seen in previous easing cycles.

“Emerging markets issuers are pumping out mandates, with the buy-side showing little sign yet of closing shop for the year, but investors are ‘not’ throwing cash at everything,” Global Capital reported on November 13 in a story entitled “EM conditions still welcoming for issuers but slip-ups are a danger”.

But Capital doubts that, on a net basis, capital will flow into EMs anytime soon, even though foreign investors made net purchases of equities and bonds for the first time in nearly four months during the first week of November.

It was reported on October 18 that flag carrier Turkish Airlines had mandated lenders for eurobonds or Enhanced Equipment Trust Certificates. However, nothing has been heard of the move since then.

Earlier this month, Istanbul mayor Ekrem Imamoglu, a newcomer to global finance circles, was in London to test waters for a $500mn eurobond sale.

On November 8, government-run Vakifbank received approval from the Turkish capital markets board (SPK) to issue €1bn worth of mortgage-backed securities abroad.

On November 18, private lender Yapi Kredi cut the issuance limit for its mortgage-backed eurobonds, already approved by the SPK, to €500mn from €1bn.

During autumn last year, the Turkish government “encouraged” local pension funds to buy local lenders’ mortgage-backed securities designed to create room for fresh lending in balance sheets following the currency crash in August. There has been talk of selling mortgage-backed papers abroad since then, along with the sale of NPLs to foreign investors.

The level of foreign interest in the mortgage-backed eurobond auctions in the making is awaited with a good deal of curiosity but how many of the buyers will have ‘moustaches’ (Turks buying via foreign entities) or what the source of capital will be are questions that remain unanswered given “confidentiality” dogma in the global finance industry.

The next scheduled eurobond redemption by the Turkish Treasury is set for May 18, 2020. A repayment of €2bn for 10-year EUR-denominated papers is scheduled. Also in 2020, the Treasury will, on June 5, redeem $2bn in 15-year USD papers. On December 3, it will redeem JPY60mn in samurai bonds.

For the Turkish real sector, the next scheduled eurobond redemption is scheduled for April 24, 2020 when Koc Holding will repay $750mn (XS0922615819) of debt which was already refinanced in March this year.